The quasioptical ray tracing code named PARADE (PAraxial RAy DEscription) [a,b], which can contribute to the modeling of propagation and absorption of wave beams in both tokamak and stellarator, is newly developed based on the eXtended Geometrical Optics (XGO) theory [c]. Transmitted power profile of Electron Cyclotron Waves (ECWs) experimentally observed in Large Helical Devise (LHD) [d,e] is numerically analyzed, as one of the applications of PARADE. Qualitative consistency between numerical and experimental results shown here is one of the validations of PARADE applied on realistic magnetic confinement system, and thus, suggests the usefulness of quasioptical codes for the predictions of Electron Cyclotron Resonance Heating (ECRH) in future reactors.

ECRH is one of the essential components to achieve the nuclear fusion. Due to capabilities of the high-power density and localized heating, ECRH is expected also to play a role of the high-functional plasma control system, for example, to suppress the Neoclassical Tearing Mode. However, since ECW beam can refract, and importantly, its profile can vary along the propagation in fusion plasmas, it is important to quasioptically evaluate the propagations and absorptions of ECW from both numerical and experimental sides.

PARADE can simulate the quasioptical propagation of wave beams in inhomogeneous anisotropic media within a reasonable computational resource. The code is based on the Schrödinger-type partial differential equation, that accounts for refraction, diffraction, non-uniform dissipation across the beam, and uniquely, mode-conversion. This Schrödinger-type equation is solved along the Reference Ray (RR) trajectory given by the ray equation [a,c]. One of the advantage of PARADE is a capability of treating mode-conversion[b,c], and another one is a capability to simulate an arbitrary beam profiles with non-uniform dissipation, whereas most quasioptical codes assume the Gaussian beam profile and uniform dissipation.

An example of the PARADE results, which calculates the O-mode beam propagation with partial absorption in plasma, is shown in Fig. 1. Wave beam is absorbed non-uniformly across the beam near the cyclotron resonance. The original intensity profile is distorted, and due to the diffraction, strongly diffused propagation is obtained. Also, the beam center, which is defined as a first-moment of the beam profile and should be considered as true-ray trajectory, is diverged from the RR trajectory, which has been considered as ray trajectory in conventional approaches. Such propagation will affect the ECRH power deposition/driven current profile and the beam profile of the passed through power that can cause deteriorating effect on the first wall or sensitive diagnostics. These situations can occur also in tokamaks when the beam crosses the resonance layer in shallow angle.

As one of the applications of the PARADE code, the experimental results from the transmission power profile measurement are compared with the calculated one. A target plate facing on the ECRH antenna via plasma was set inside the LHD. By measuring the temperature increase of the target plate, transmitted intensity profile of ECW beam, which is not absorbed by the LHD plasma in a single path, is obtained. This direct measurement system gives the experimental evaluation of refraction, diffraction, and partial absorption of ECW caused by plasmas. This first quantitative comparison come to be realized due to the development of the PARADE code, because conventional multi-ray methods used in the past cannot simulate a beam profile accurately, due to an ignoring of the diffraction.

Figure 2 shows intensity profiles of ECW on the target plate, experimentally obtained by the direct measurement system and numerically simulated by PARADE. By increasing the electron density of LHD plasma, the beam positions of both numerical and experimental results are gradually shifted to clock-wise- and negative R-directions in same scale. This qualitative agreement is a good verification that the PARADE certainly traces quasioptical propagations of ECW in LHD. 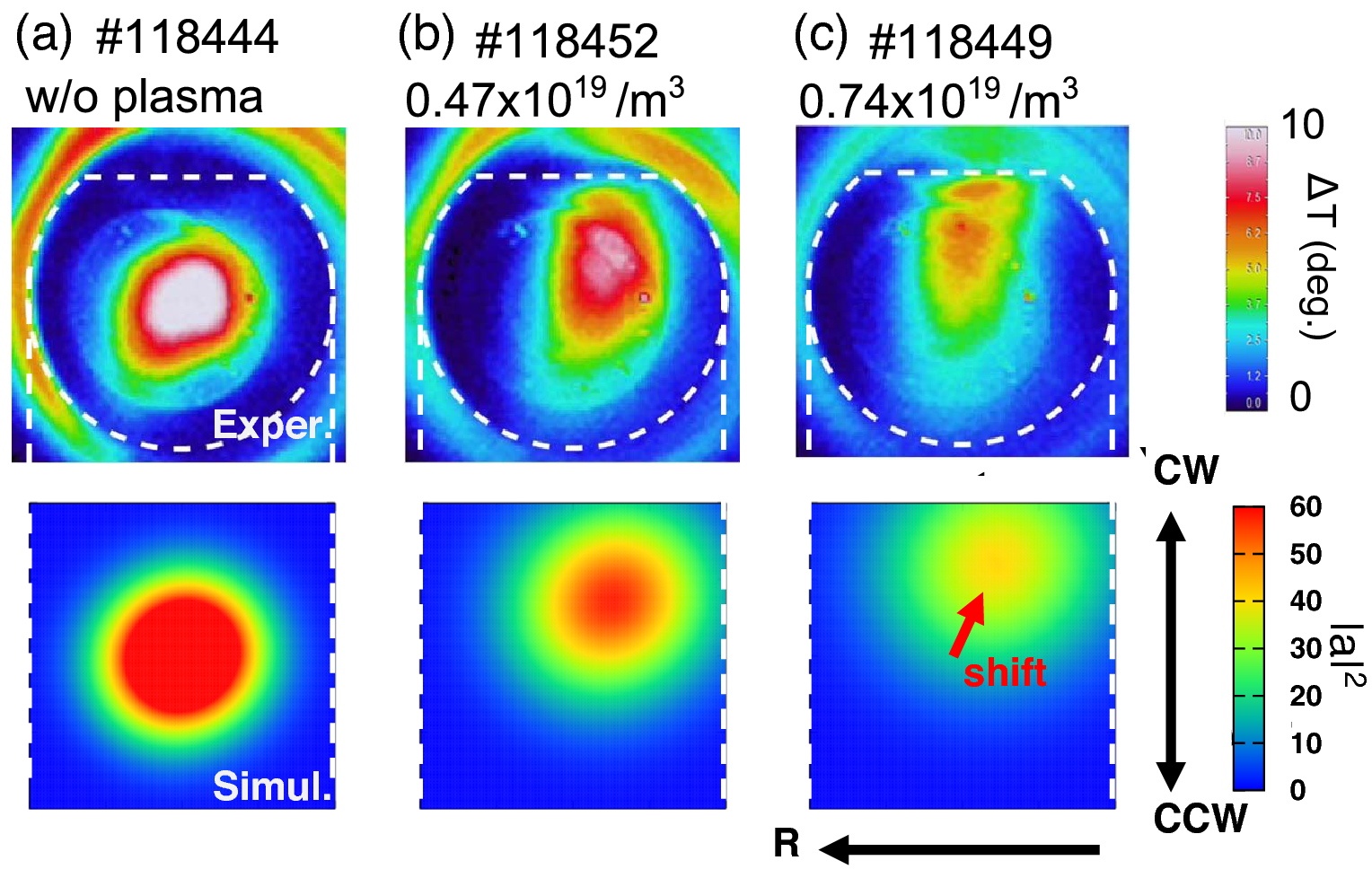 As another application of PARADE, ECRH power deposition profile in a typical LHD experiment is simulated. Figure 3(a) shows the cross-section of $154$~GHz 2nd harmonics X mode ECW beam injected into the LHD, and Fig. 3(b) shows ECRH power deposition profile for same simulation with (a), where orange-line is the PARADE result, and red-line is the result from the conventional multi-ray tracing, which cannot account for the diffraction. The centers of power density of both results are very similar, but its profile of PARADE is smoother than that by multi-rays. This is because of the reproducibility of the envelope structure. The envelope with continuous and smooth amplitude profile by PARADE, which contains diffraction, gives more realistic power deposition profile than conventional multi-rays method. 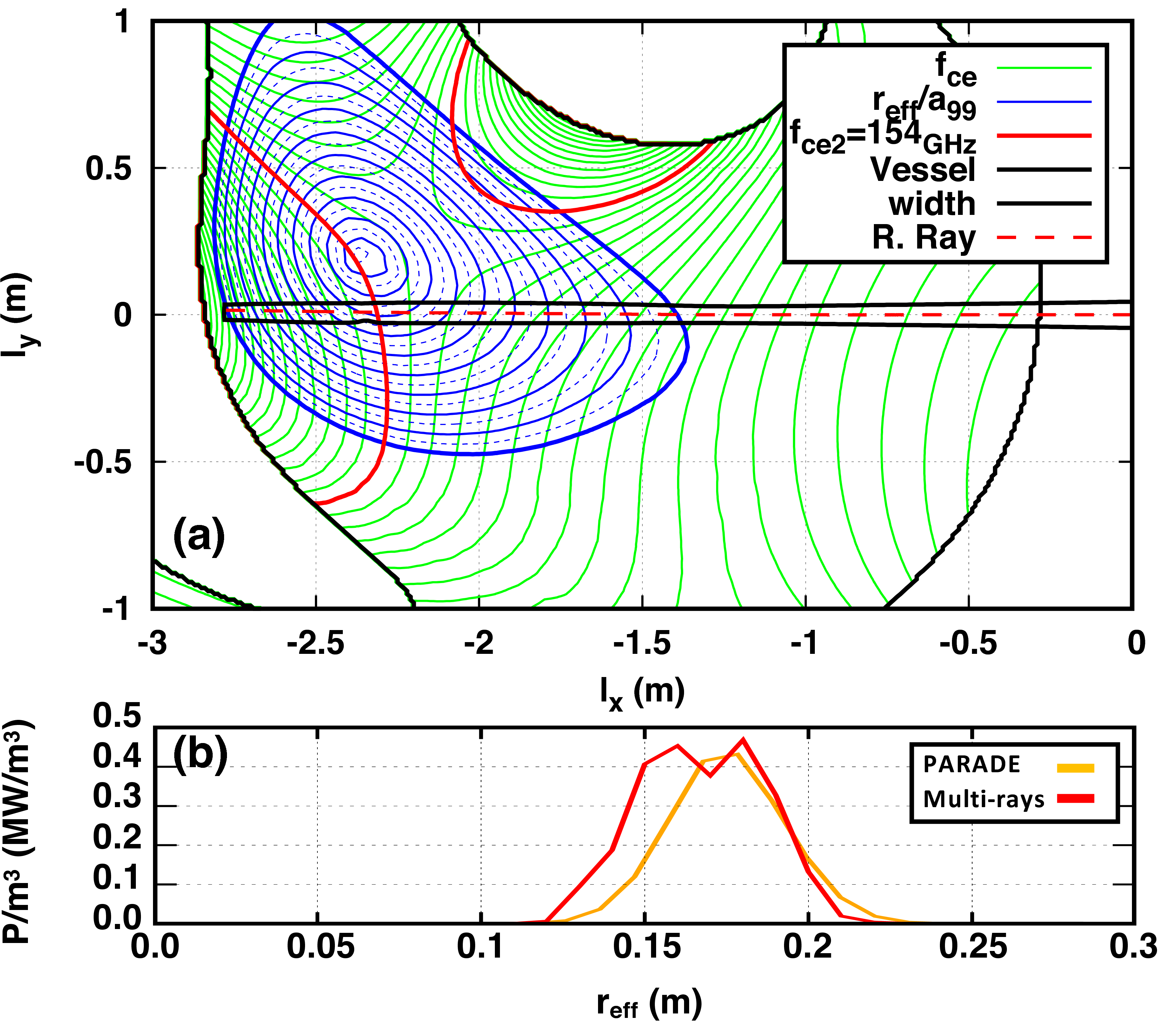 Newly developed quasioptical ray tracing code ``PARADE'' can describe wave beams with inhomogeneous absorption across the beam, that should be treated carefully not only in LHD-type stellarator but in tokamak as well. Quasioptical propagations and absorptions of ECW in LHD, numerically performed by PARADE are in qualitative agreement with experimental results in LHD and show the superiority over the conventional multi-ray tracing, and note that, PARADE can apply to any plasma configuration such as tokamak plasmas. These confirm that PARADE is useful to predict the realistic ECRH experiments, and powerful tool for the detailed design of future tokamak and stellarator where ECRH is expected as the main heating.