Helium (He) operation has recently been successfully performed on EAST equipped with an upper ITER-like, water-cooled, tungsten (W) monoblock divertor. The main plasma-wall interaction issues in He plasmas have been studied and compared with those in deuterium (D) plasmas, such as divertor detachment, W erosion, material migration, ELM characteristics and control, etc. Studying the impact of He plasma operation on W plasma-facing components (PFC) and the general characteristics of He tokamak discharges with a W divertor is a high priority for development of the ITER Research Plan, since He plasmas are currently foreseen in the ITER non-active operation phases due to the generally observed lower H-mode power threshold in He compared to hydrogen. Furthermore, He is naturally present during D-T operations. 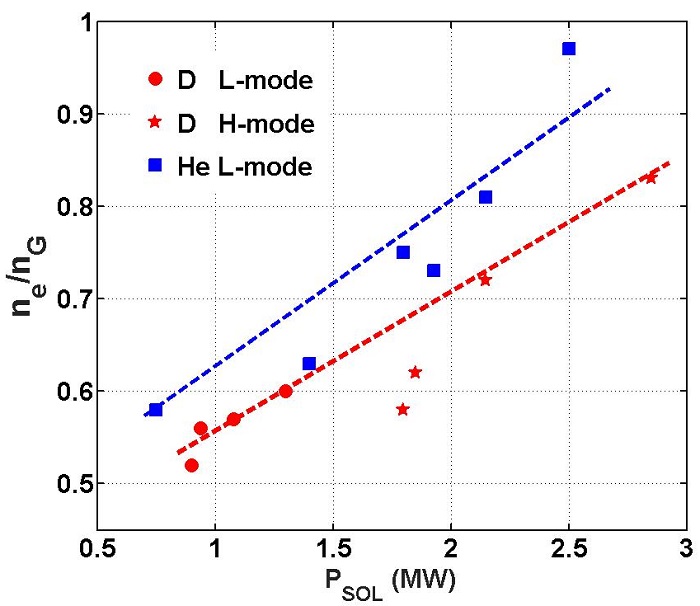 The He discharges obtained in EAST comprise an extensive set of pure RF-heated, H-mode plasmas with different types of ELMs. Higher power He discharges enhance deuterium (D) removal efficiency and lead to smooth changeover from D to He. The global recycling coefficient of He measured by particle balance increases with heating power, and is higher than in D. The He pumping speed is relatively low compared to D, and can be slightly improved by moving the strike point closer to the cryopump. It is found that the energy confinement and pedestal characteristics are strongly dependent on the He purity in the plasma, measured by an edge visible spectrometer observing HeII and D$_{β}$ lines simultaneously. High performance Type-I ELMy H-modes can only be achieved for He concentrations <60%. Both n=1 resonant magnetic perturbations (RMP) and boron (B) powder injection have been used to suppress ELMs effectively in He plasmas. With different RMP spectra, ELM suppression can be achieved at a similar n=1 threshold current. A flow rate threshold of boron power injection has also been found for ELM suppression with negligible impact on the core plasma parameters.
Divertor detachment in He plasma has been studied using density ramps. As shown in figure 1, the detachment threshold density is significantly increased with increasing heating power and is higher than for equivalent D discharges at the same power to the scrape-off layer (P$_{SOL}$). Low levels of neon (Ne) impurity seeding can help to achieve divertor detachment at a lower density. Active feedback control of radiation power by Ne seeding helps to approach divertor detachment without degradation of core plasma performance. The divertor heat flux width in He is similar with that in D for similar plasma conditions. The divertor heat load has been controlled by RMPs along with the Ne seeding, with W erosion reduced due both to ELM suppression and lower T$_e$ as a result of Ne seeding.
During He H-mode discharges, two peaks of W gross erosion rate during each ELM burst were often observed by a high time resolution WI spectroscopy indicating erosion caused by main ions and impurities respectively. The erosion processes can be quantitively reproduced by using the Free-Streaming model (FSM) $[1]$ taking into account different species in the plasma. As shown in figure 2 for the He discharge with a He concentration about 40%, the first W erosion peak is mainly caused by the He$^{2+}$ ions which is consistent with the peak of the ion saturation current measured by divertor probes. The second W erosion peak is due to the streaming C$^{6+}$ ions, for which the time delay can be as much as 0.5 ms for the He plasma discharge, and is caused by the discrepancy of the thermal speed between C$^{6+}$ and main ions. It is found that the ELM-averaged W erosion rate by He plasma increases nearly linearly with the heating power, similar to D plasmas. The intra-ELM W sputtering source also shows a strong positive correlation with the ELM frequency. The inter-ELM W erosion rate in He is about 3 times that in D with similar divertor conditions due to the higher W sputtering yield of He ions. 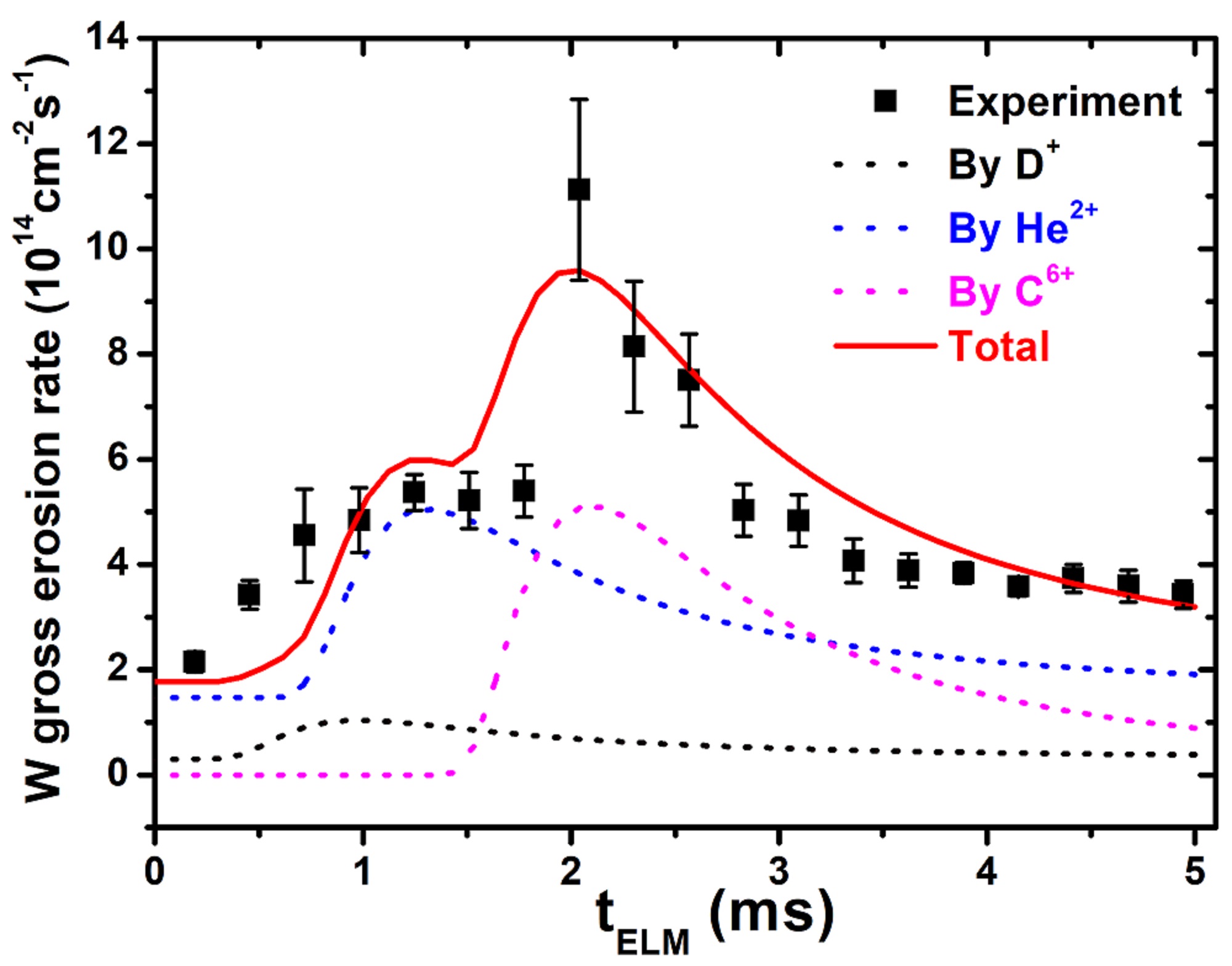 Three dedicated He experiments with sample exposures have been successfully carried out using the outboard midplane manipulator MAPES. Two sets of He pre-exposed W samples have been used to study material erosion and fuzz formation features. To understand material migration in magnetically shadowed regions at the first wall panels in ITER $[2]$, a proxy tile with two different material coatings, carbon and aluminum, on different sides of the plasma wetted area, have been exposed in L-mode He plasma, thus avoiding the effects of chemical erosion. Net material deposition in the shadowed regions is not found. A known quantity of $^{13}$CD$_4$ was injected and traced using graphite samples in both He and D plasmas to study material migration in the main chamber wall and the effect of chemical erosion on C redeposited layers. A redeposited layer is formed close to the injection point after the exposure and it can be seen that the direction of material migration is dominated by the E×B drift. Post-mortem nuclear reaction analysis finds the unexpected result that the $^{13}$C deposition fraction in D is about 50% higher than that in He, indicating a higher physical sputtering rate by He than the chemical erosion rate by D.
$[1]$ W, Fundamenski et al., Plasma Phys. Control. Fusion 48 (2005) 109
$[2]$ R. Ding et al., Nucl. Fusion 55 (2015) 023013