Plasma-wall interaction (PWI) processes are important in long-pulse plasma operation of fusion devices due to the main issues of increased fuel retention, material erosion and redeposition which are induced by a large increase in particle fluence to the wall compared to present experiments. The in situ approach is an urgent requirement to be utilized to real-time measure the fuel content on the first wall during the tokamak operation. Meanwhile, the characteristic of fuel retention during PWI processes is strongly linked to edge particle flux and fluence. Therefore, the key challenge for fuel retention studies is to monitor not only the elemental composition on the PFCs but also the local plasma condition during experimental processes in fusion device in situ and real-time. Experimental Advanced Superconducting Tokamak (EAST), which is the world’s first fully superconducting magnetic confinement facility with ITER-like magnetic field configuration, provides a unique platform to investigate the physical and engineering issues of PWI research for the next H-mode long-pulse fusion devices such as ITER and beyond. Laser-induced breakdown spectroscopy (LIBS) as a well-established elemental composition analysis method has been demonstrated as one of the most promising approaches for in situ PWI studies on the first wall of fusion devices [1,2]. The in situ LIBS system in EAST 3 provide information about the elemental composition of the first wall on the high-field side (HFS) near mid-plane in EAST. There is a need to address the link between the fuel retention on the first wall and local plasma conditions. For this purpose, an in situ LIBS system combined with optical emission spectroscopy (OES) is used to not only measure the fuel retention on the first wall but also simultaneously monitor the edge conditions during long-pulse discharges of EAST.

The in situ LIBS diagnosis system is located at the H-port, which is one of the 16 main horizontal ports along the toroid in EAST. The schematic of the system is illustrated in Fig. 1. The detail of the optical system can be found in our previous works 3. The intensity of D retention on the first can be achieved and analyzed by the spectrometer. During the EAST long-pulse plasma discharges, the spectrometer is also used for measuring the edge OES spectra for analyzing the local plasma conditions and providing the photon flux of the Dα line emission from the region of scrape off layer (SOL) and edge plasma. The typical spectra of LIBS from the TZM first wall and edge OES in EAST are shown in Fig. 2. The LIBS spectrum is measured after Li wall conditioning and D discharge using single pulse LIBS on the surface of the mid-plane TZM first wall. It clearly shows Li and Dα spectral lines from fuel retention as well as Mo I emission from the first wall substrate. The H content in the core discharge plasma is very low due to the Li wall conditioning, thus the fuel retention on the wall is dominated by D implantation and codeposition. The H content is lower than the limit of detection of the spectrometer at these experimental conditions. The lines of Li I, Li II and Dα are observed by edge OES measurement. Some spectral lines of Mo impurity due to first wall erosion may be observed in some cases of edge localized modes burst or fast plasma shutdown. The spectral intensity ratio of Li II and Li I in the edge OES spectra is much higher than that in the LIBS spectra.

In the future, the fuel retention on the first wall as a function of the distance between HFS and LCFS will be studied to search for the features for the retention behavior in the transition from net erosion to net deposition zone. In addition, it is planned to use an endoscope system to upgrade and extend the LIBS and OES detectable area to the tungsten upper divertor region which is a strong PWI interaction zone. The wall Langmuir probe and infrared camera observation systems will be used to characterize the edge condition and wall surface temperature. Deposition and erosion in divertor zones will be in situ investigated using the upgrade LIBS system in EAST. 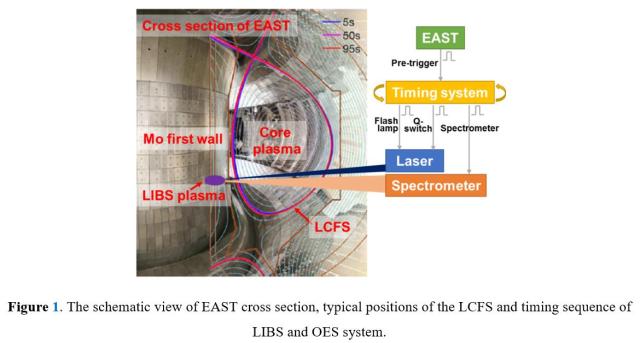 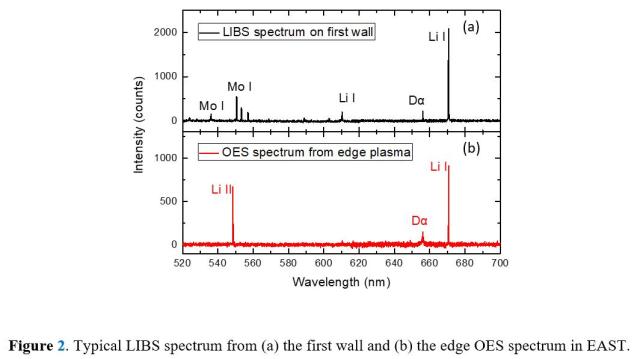 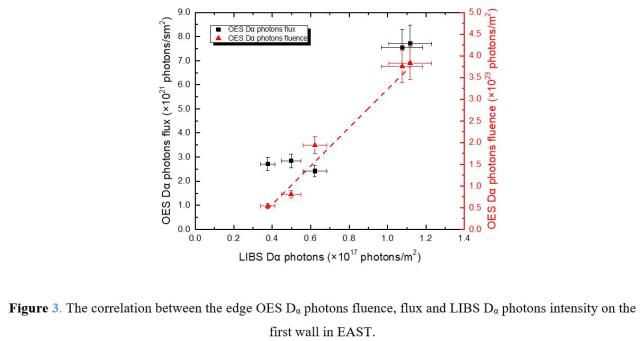