Experiments have been carried out to explore quiescent H-mode (QH-mode) $[1]$ scenario under the condition of low torque and pure RF injection (true zero torque) with ITER like tungsten divertor on EAST, which will facilitate the eventual use of this scenario on ITER and other reactors. EAST achieved the stationary QH-mode over 50-80 energy confinement time or 3-6 current relaxation time with the energy confinement close or slightly below $H_{98,y2}$ scaling ($H_{98,y2}$ ≤ 1.0) by using counter and co-Ip neutral beams (-0.5 Nm ≤ $T_{inj}$ ≤ -1.0 Nm) or pure RF power with non-resonant magnetic fields (NRMF) in separated experiments. Characteristics of coherent modes or broadband MHD fluctuations with enhancing the edge turbulence transport and replacing ELMs during QH-mode phase are observed from the spectrum analysis of Mirnov probes, microwave reflectometer and other diagnostics.

EAST first QH-mode was accessed by using the counter NB to produce plasma rotation in the counter direction. Results show that stationary ELM-free regime obtained more easily with lower recycling and stronger counter NBI torque. Figure 1 shows an example of QH-mode discharge ($I_p$~0.5MA, $B_T$=2.5T, $q_95$~5.0) with ELM free from 3.5s to 7.0s. The plasma configuration is an upper single null (USN) with the strike points on the tungsten divertor. The two counter NBs were used to access QH-mode and then one counter NB was schemed to maintain this regime, where the beam energy was optimized to mitigate the prompt fast ion losses for reduced impurity influx, together with zero gas feed-forward after 2.2s. The spectrum analysis shows that coherent multi-harmonic modes ($f$ ~60/120kHz $n$=-1/-2) appear to replace ELMs. Here n is the toroidal mode number.

Experiments on the exploration of lower torque have shown that QH-mode can be achieved by using near balanced NBI at low recycling high density regime. The coherent modes become weak and change to broadband fluctuations with more balanced NBI, similar to the previous DIII-D experiments $[2]$. The relative high density (<$n_e$>/$n_{GW}$~0.6) operation might be a knob in this experiment which can reduce the shine-through and fast ion loss because EAST NB has the small tangential tilt angle.$[2]$

Using the 3D fields, EAST recently achieved the QH-mode with the RF only heating, suggesting that QH-mode can be obtained from a start with zero injected torque rather than ramping the torque down from a high value $[3]$. Figure 2 presents a typical discharge of QH-mode ($I_p$~0.5MA, $B_T$=2.5T, $P_{LHW}$=3.5MW, $P_{EC}$=0.9MW, $q_{95}$~5.0, USN) with the application of n=2 non-resonant rotating field, where the upper array coils phase rotated 3 periods within 2.5s. ELMs completely disappeared and were replaced by the quasi-coherent/broadband MHD fluctuations from 3.5s to 6.5s. ELMs came back after 6.5s suggesting that the NRMF on the plasma edge is the dominant effect. Note that the RF power coupling was also a challenge with the reduced or zero gas puff. 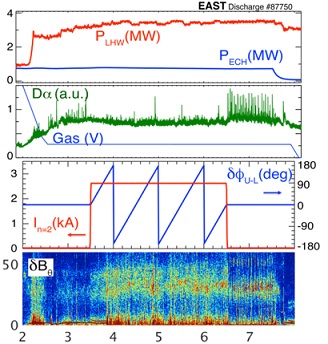 In summary, recent EAST experiments demonstrated QH-mode scenarios with near balanced NBI and with RF-only heating. More analysis of experimental data from core and edge diagnostics is ongoing, to investigate edge stability and particle transport. With the upgrades $[4]$ in 2020, EAST will be capable to further extend QH regime towards more reactor relevant by exploiting two extra ECH gyrotrons and the condition of full metal walls.