Runway electrons (REs) [1] in a tokamak is of great concern irrespective of the size of the machine. Such runway electrons carries significant amount of plasma energy of several MeV can severely damage the first wall and in-vessel components of the tokamaks [2] as well as can interfere with the complex plasma phenomena like plasma equilibrium, MHD instabilities and plasma disruption. Therefore the control of runway electrons are of great concern for ITER and DEMO like reactors. Similarly for reliable operation of smaller tokamaks such runway electrons should be suppressed or extracted without affecting the plasma operation. Several techniques exists viz., massive gas injection (DIII-D, TEXTOR), magnetic field perturbation (JT-60U, Versator I), resonant magnetic field perturbation (TEXTOR), additional gas-puff (JET, ASEDEX, ADITYA) [3] , ECH heating and LHCD (FTU) [4] for suppression/extraction the runaway electrons in tokamak. Another magnetic field perturbation technique similar to Versator I tokamak [5], for runway electron extraction has been applied in the ADITYA tokamak experiment. In ADITYA local vertical field coils (LVF coils) to generate local magnetic field perturbation has been successfully applied to extract runway electrons during early phase of discharge time (0.5 - 15 ms) which improved the plasma performance as reported in ref [6]. In this work, an attempt has been made to numerically model the runway electron extraction experiment using LVF coil in ADITYA. All coil systems to generate magnetic field configuration and the runway electron dynamics without radiation loss of the RE has been taken into consideration in the numerical simulation to explain the experimentally observed extraction of the RE in ADITYA tokamak. The magnetic field generated by all coil systems of ADITYA are numerically modeled and calculated by EFFI code [7]. The field calculated by the EFFI code then used by the PARTICLE3D code [8] to track the runway electrons following relativistic dynamics without radiation loss. PARTICLE3D stops following the electron when it hits the vessel wall so as to record that hit point which can be used to match the experimental observations in case of localized hard X-ray emission or physical damage of the wall.
The Ohmic coil system of ADITYA consists of one single air-core solenoid and 4 pair of vertical field coils. Toroidal coil systems of ADITYA has 20 TF coils to generate magnetic field of 0.75 - 1.5 T at the major radius 0.75 m. LVF coils are a pair of up-down symmetric coils placed on top and bottom TF coil I-Beam of ADITYA tokamak. The dimensions of the coils are ID $\approx$ 42.4 cm, OD $\approx$ 51 cm, $\Delta$r $\approx$ 4.3 cm, $\Delta$Z $\approx$ 8.5 cm, conductor dia. 0.85 cm, number of turns (n) $\approx$ 50 turns/coil and the distance from the equatorial plane (Plasma centre) to coil center (Z) is $\approx$ $\pm$ 80 cm. The coils are connected in series to produce LVF perturbation in the direction opposite to the actual equilibrium field at that location.
All coils of ADITYA tokamak as detailed above has been numerically modeled to generate the magnetic field configuration of the initial phase of the discharge. The toroidal field considered in this preliminary numerical simulation study is ~ 1.5 T at the major radius 0.75 m. Local vertical field used in the simulation corresponds to 4.2 kA of input current. A single runway electron of 3MeV energy has been traced using PARTICLE3D code with and without LVF coils. The simulated orbits of the 3 MeV runway electron for three cases (I) no LVF (II) +ve LVF and (III) -ve LVF are shown in figure 1(a). 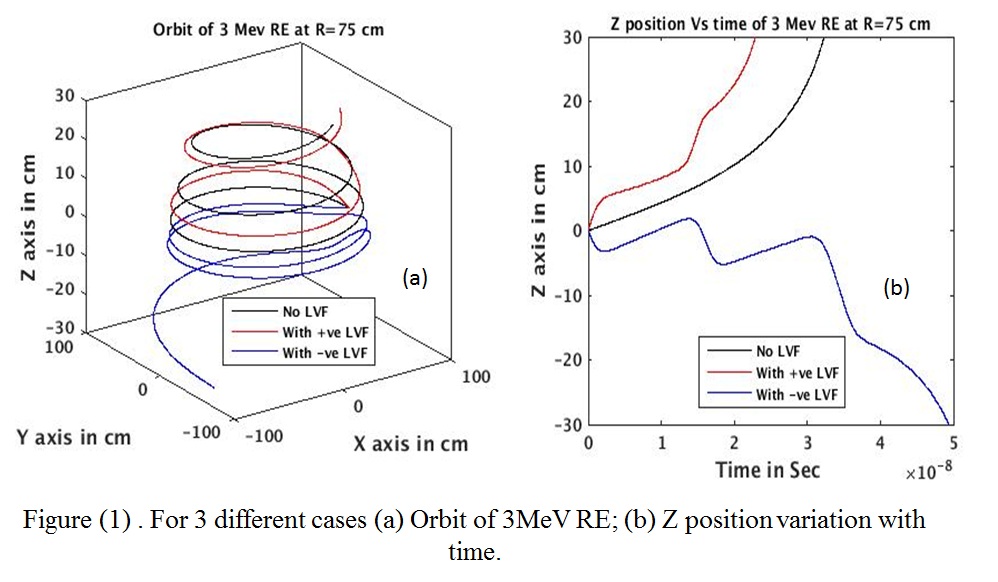 It can be seen that under the influence of LVF coil the trajectories of the runway electron for three different cases differs significantly. While for + LVF coil the electron takes lesser time to be extracted than the without LVF coil, for _ve LVF the time taken is higher than with out LVF coil case. The time scale of the deconfinement is ~$10^{-8}$ sec for 3 MeV electrons which is very small as compared to the experimental time scale of $10^{-3}$ sec. The phenomenon can be easily understood from the plot of Z-position of the particle vs time as depicted in figure 1(b).
Therefore it can be concluded from the simulation results that under the influence of the local vertical field applied in the opposite direction to the equilibrium vertical field (at the mid plane of LVF coil location) the runway electrons gets deconfined. The simulation study shows the capability of the simulation methodology to model the RE deconfinement experiment and to explain the experimental observations. Though simulation of RE dynamics related to other phenomena in the tokamak have been reported earlier, however the simulation of RE deconfinement experiment using local magnetic field perturbation presented here is the first of its kind. Details of modelling and simulation results of the ADITYA RE deconfinement experiments with corresponding input variables would be presented. As RE mitigation is of great concern for larger tokamaks, the discussed simulation of RE de-confinement technique has the potential to be adopted for RE mitigation in such machines.