Controlled mitigation of heat load has been demonstrated for the first time by doping a closed divertor$^{1}$ plasma at DIII-D with low Z impurity powders. Injection of low-mid Z impurities is a technique under investigation to address the issue of power exhaust in ITER and next-step fusion reactors$^{2,3}$. The use of non-recycling impurities in powder form provides a new capability extending the limited number of impurity species and mixtures usable with conventional gas injection$^{4}$. At DIII-D, it has now been shown that local doping of the outer strike point (OSP) with lithium (Li), boron (B), and boron nitride (BN) powders can be used to enhances radiative cooling of the divertor plasma. In particular, using B as a radiator has the advantage of concentrating the radiation zone more rooted in the scrape-off layer (SOL), allowing for high core performance and high dissipation in the boundary and divertor at the same time$^{5}$. Moreover, Li and B have beneficial effects in terms of wall conditioning and ELM mitigation and suppression$^{6,7}$. 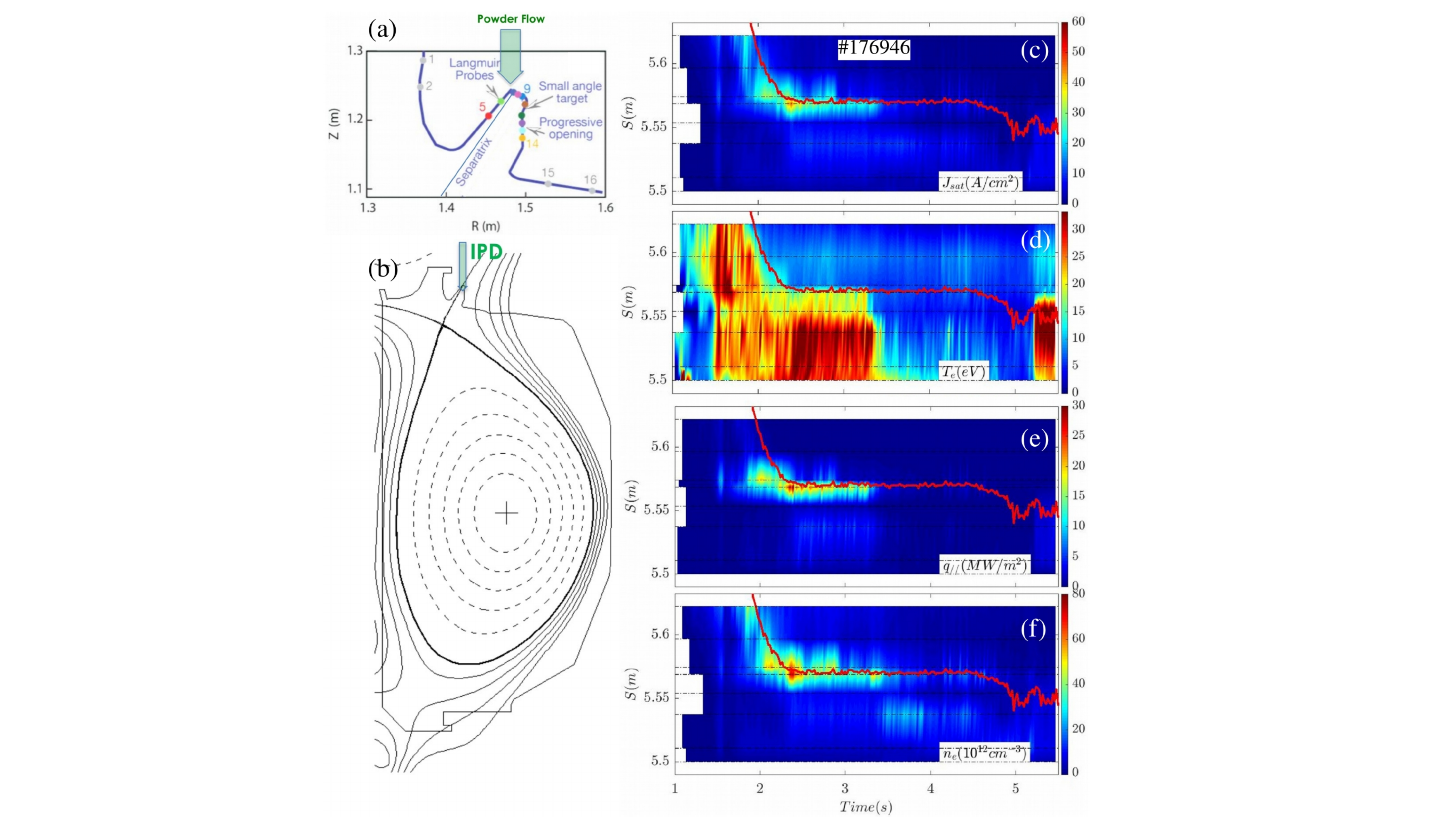 The experiments focused on ELMy H‑modes (I$_{p}$~1 MA, B$_{t}$=2 T, P$_{NB}$~6 MW, f$_{ELM}$~80 Hz, n$_{e}$~3.6-5.0$\cdot$10$^{19}$ m$^{-3}$), confined in upper-single-null geometry with the OSP positioned in the small angle slot (SAS)$^{1}$. The geometry of the SAS closed divertor, the location of the OSP at the SAS target, the position of the Langmuir probes, the injection location, and the magnetic equilibrium are shown in figure 1 a, b. In this configuration, powders were dropped with rates of 1-50 mg/s directly into the OSP region, allowing to study near-target power dissipation and divertor leakage. For all impurity species, injection caused substantial drops in downstream electron temperature (T$_{e}$), particle fluxes (J$_{sat}$), and heat fluxes q$_{||}$, as measured by a densely spaced array of Langmuir Probes in the SAS (figure 1 a). The time traces of these downstream parameters measured poloidally along the SAS wall, are shown in figure 1 c-f for a discharge with BN injection at t~3 s, causing a sustained strong drop of heat and particle fluxes at the OSP.
In this and similar cases, features characteristics of detachment, such as a strong increase of near-target neutral pressure, were also observed. In general, the high divertor radiation state could be achieved with a 2-15% degradation in H-mode energy confinement.

To study the impact of the impurities on SAS dissipation and examine the effect of different impurities’ radiation efficiency and spatial distribution, these scenarios have been analyzed with the 3D plasma-fluid and kinetic neutral edge transport code EMC3-EIRENE. In a first step, transport simulations have been conducted in an axisymmetric geometry, for upstream densities of 1-3$\cdot$10$^{19}$ m$^{-3}$ with B, N, Li as main impurities separately to survey the distribution of the radiated power of each impurity individually. The 2D emissivity patterns for Li and B are shown in figure 2 for an upstream density of 2$\cdot$10$^{19}$ m$^{-3}$. The Li radiation is concentrated near the separatrix and at the strike line while the B peak emission front is concentrated in the far SOL and outer tail of the main recycling region. These characteristic features, qualitatively consistent with measurements of spectral divertor imaging, are a result of the different cooling efficiencies of these two impurities combined with transport effects. 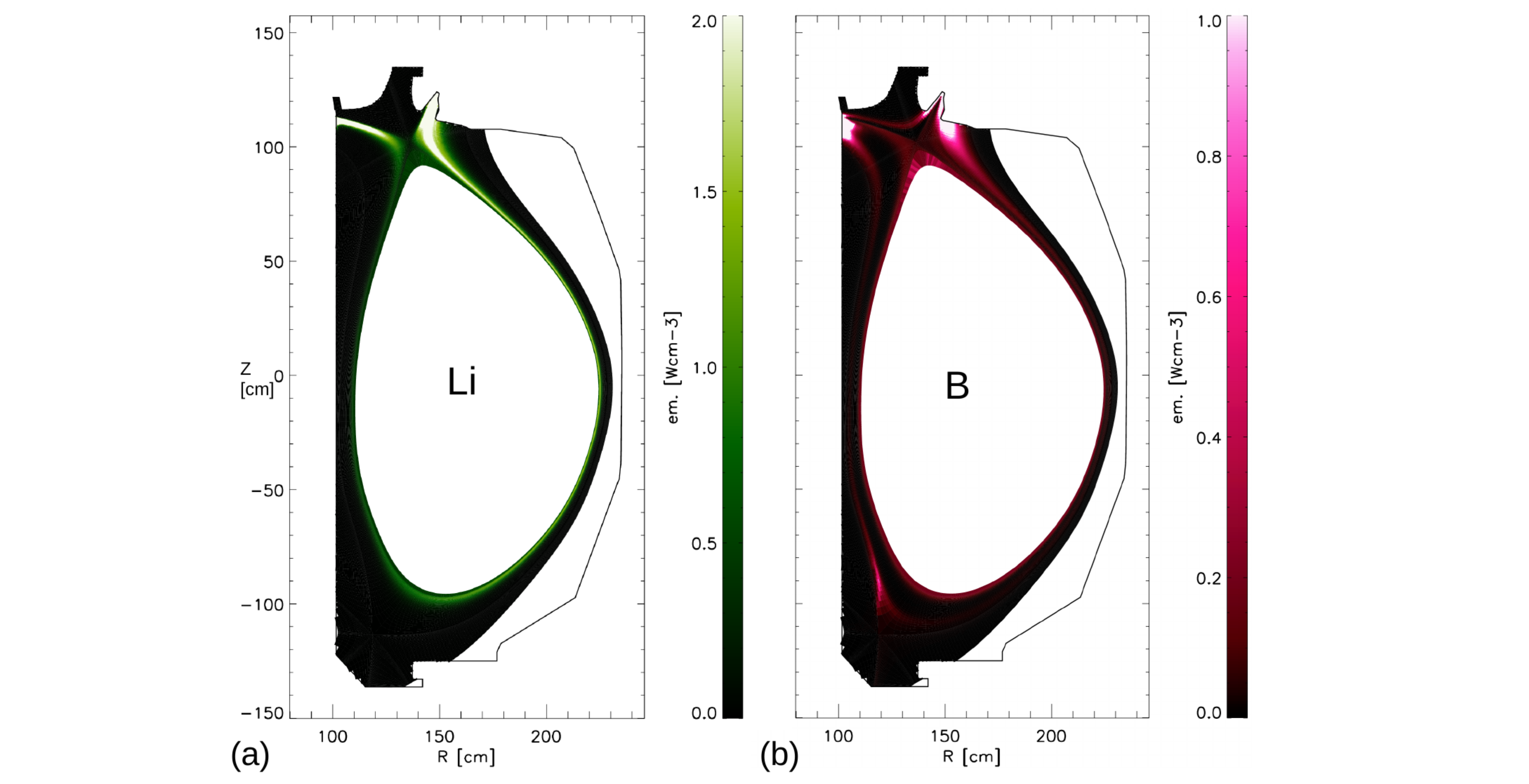 The combined set of experimental results and modeling indicates that injection of low Z impurities in powder form can be a novel effective method to enhance and control of radiative dissipation in closed divertor configurations. This first-time assessment of the effects of different impurity powder species supports the development of new divertor solutions avoiding impurity leakage from the divertor and maintaining high performance.