Measurements of pellet-triggered edge localized mode (ELM) heat fluxes are presented here from experiments in ITER-relevant low collisionality pedestals (normalized pedestal collisionality $\nu^*_{ped}$ < 1) on DIII-D. These measurements demonstrate a reduction of peak ELM energy fluence at the inner strike point as compared to natural ELMs by as much as $\sim$50%. The inner strike point is typically the limiting location for material heat flux limits due to ELMs, so reducing the ELM heat flux there enables a higher allowable pedestal height before an ELM would need to be triggered. This in turn reduces the pellet pacing frequency required to protect materials and increasing the time-integrated pedestal pressure.

Pellet ELM pacing will be investigated in ITER in its pre-fusion power operation phases while access to RMP ELM suppression and/or other ELM-free operational regimes are assessed. Although previous experiments have demonstrated a reduction in peak ELM heat flux using pellet pacing for higher collisionality pedestals {1}, the capabilities and limits of this actuator for mitigating ELM heat flux and core impurity accumulation in low collisionality conditions are poorly understood. At low collisionality, the edge bootstrap current is increased for a given pedestal pressure, leading to pedestal growth being limited by the current density (kink/peeling instability) rather than the pressure gradient (ballooning instability). Exploring pellet ELM triggering in low-collisionality regimes in DIII-D tests the applicability of this ELM control actuator in this new regime and enables model validation so that we may more confidently extrapolate to ITER and other future devices. This pellet ELM triggering can then be extended to ELM pacing at a rate several times that of the natural ELM frequency, but the foundational experiments presented here use only infrequent pellets. 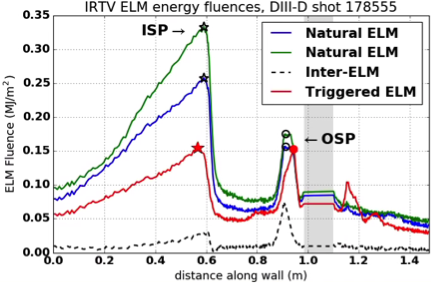 By shifting the location of the outer strike point away from the pumping duct during pellet ELM triggering while simultaneously attempting to access low collisionality conditions, heat flux measurements were obtained during pellet ELM triggering experiments in DIII-D. Figure 1 gives the ELM energy fluence profiles (the heat flux profiles integrated over 2 ms in this case) from one of these discharges for two natural ELMs (in blue and green), an ELM triggered by a large pellet (in red), and the inter-ELM heat flux integrated for the equivalent time frame, for reference (in dashed black). All four profiles are within the same $\sim$150 ms of DIII-D discharge 178555, with normalized pedestal collisionality < 0.7. The x-axis in Figure 1 follows the lower divertor target from the inner wall to the floor to the far scrape-off layer, with the inner strike point (ISP) and outer strike point (OSP) indicated around 0.6 m and 0.9 m, respectively. An area near the OSP is obstructed from view of the infrared camera used here, resulting in the shadowed region of Figure 1 between 0.98 m and 1.1 m where no heat flux measurements are available.

As seen in Figure 1, for large pellet–triggered ELMs, the relative amplitude of the integrated heat flux at the inner strike point is reduced by about a factor of 2, while a smaller increase in heat flux is observed in the far SOL. Because the ISP is the location of largest energy fluence for low collisionality ELMs in this dataset, the reduction of heat flux at this location would be beneficial for minimizing material damage for a given ELM size. The far scrape-off layer (on the shelf, where distance > 1.1 m) is also shown to have an additional heat flux lobe when large pellets trigger ELMs. This feature appears to be a three-dimensional structure that propagates in time as the ELM evolves, and also appears in the D-alpha fast camera images. 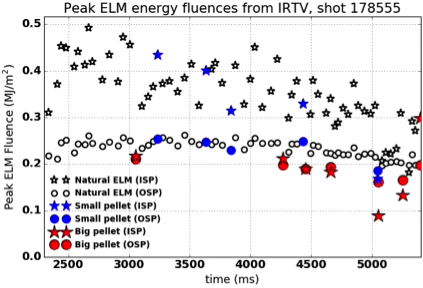 One goal of a pellet ELM triggering or pacing scheme would be to keep the peak ELM energy fluence values below the melting limit of the divertor material. The peak ELM energy fluences are plotted in Figure 2 for the ISP (star symbols) and OSP (circle symbols) for a series of natural and triggered ELMs from DIII-D discharge 178555. For natural ELMs, plotted as small unfilled symbols, the ELM energy fluence is almost always larger at the ISP than the OSP. This finding that the limiting value of ELM energy fluence occurs at the ISP is consistent with previous studies for naturally ELMing discharges with low collisionality pedestals in DIII-D {2}. $\nu^*_{ped}$ is $\sim$0.5 before pellets are injected and increases throughout the discharge, to $\sim$1.0 at 5.0 s and $\sim$1.5 at 5.2 s.

When large pellets (1.8 mm) are injected from the low field side of the device and trigger ELMs, as shown with large red symbols in Figure 2, the peak ELM fluence at the ISP is observed to be greatly mitigated. For ELMs triggered by smaller (1.3 mm) pellets plotted in blue, however, the heat flux distribution is comparatively unmodified with respect to the natural ELMs. Assuming the allowable ELM size determines the allowable pedestal height, these results suggest that reducing the peak ELM energy fluence at the ISP would increase the allowable pedestal height before an ELM triggering event is necessary. This could enable lower frequency pellet pacing and higher peak and time-averaged pedestal heights.