Significant stabilizing effect of kinetic thermal ions is found for the LHD plasmas. The kinetic MHD simulations for the LHD plasmas at high magnetic Reynolds number show that the high beta plasmas can be maintained since the saturation level of the pressure driven MHD instabilities is significantly reduced by the kinetic thermal ions. This results from the fact that the response of the trapped ions to the instabilities is weakened by the precession drift motion in the three-dimensional magnetic field. In the LHD experimental results, the instabilities do not cause significant degradation of the plasma confinement for the Mercier parameter $D_I<0.2\sim0.3$[A]. The linear MHD stability analysis for the plasmas with $D_I=0.2\sim0.3$ in [A] showed that the linear growth rates of the ideal interchange modes with low mode number are $0.01\sim 0.015 / \tau_a$ where $\tau_a$ is the Alfvén time, which are close to the linear growth rate of the interchange mode analyzed in this paper. The supercritical stability of the LHD plasmas well above the Mercier criterion can be attributed to the precession drift motion of the trapped ions in the three-dimensional magnetic field.

In the LHD experiments, about 5% of the volume averaged beta value is achieved without large MHD activities in the inward shifted LHD configurations where the magnetic axis is shifted inward to the center of the helical coils. However, previous theoretical studies based on the MHD model predicted significantly more unstable MHD modes which were not observed in the experiments [B]. The kinetic MHD analysis for low magnetic Reynolds number showed that the kinetic thermal ions suppress the resistive ballooning modes[C]. Although the saturation level is also suppressed, the decrease of the central pressure occurs in the same way as the MHD model. In this study, nonlinear evolution for the high S number has been carried out by the kinetic MHD simulation in order to investigate whether high beta plasmas can be maintained.

The numerical calculations are done by MEGA code where thermal ions are treated by the drift kinetic model and the electrons are treated by the fluid model [C-E]. The MHD equilibrium is constructed by the HINT code where the central pressure is assumed to be 7.5%[B]. In this equilibrium, the peripheral region is Mercier unstable. Using the pressure obtained from the HINT code, PHINT, the initial pressure profiles are set to be $P_{e,eq}=P_{i\perp,eq}=P_{i\parallel,eq}=P_{HINT}/2$ where $P_{e,eq}$ and $P_{i\perp,eq}$ ($P_{i\parallel,eq}$) are the electron pressure and the ion pressure perpendicular (parallel) to the magnetic field. The initial density profile is assumed to be uniform and the initial ion’s distribution is assumed to be a Maxwellian distribution.

Figures 4 and 5 show the nonlinear simulation results for $S=10^7$ where the most unstable mode is the interchange mode with $(m,n)=(3,2)$. Figure 4 shows time evolution of profile of the perturbed pressure for the MHD model and the perturbed $P_e$ for the kinetic MHD model in a poloidal cross section. For the MHD model, the mode expands to the core region in the initial nonlinear phase ($t =2079\tau_a$) and then the central pressure decreases as shown in Fig.5(a). On the other hand, for the kinetic MHD model, the high beta plasma is maintained at the saturated state where the pressure is defined as $P=P_e+(2P_{i\perp}+P_{i\parallel})/3$. The mode does not expand to the core region as shown in Fig.4. Moreover, as shown in Fig.5(b), the perturbation of $P_{i\perp}$ of the $(m,n)=(0,0)$ mode is significantly suppressed. This results from the fact that the orbit of the trapped ions in the nonlinear phase do not significantly deviate from the equilibrium orbit due to their weak response to the instability. 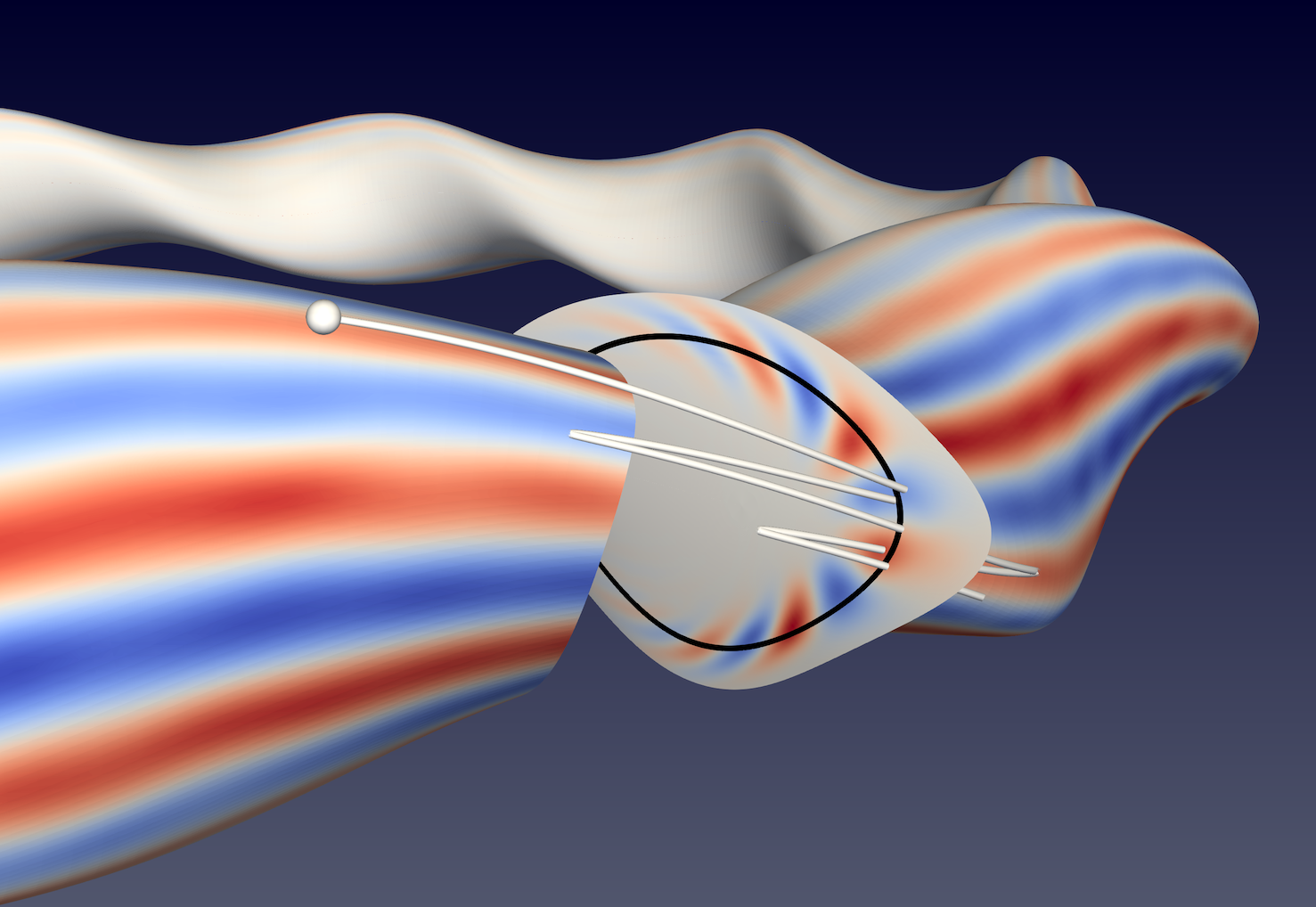 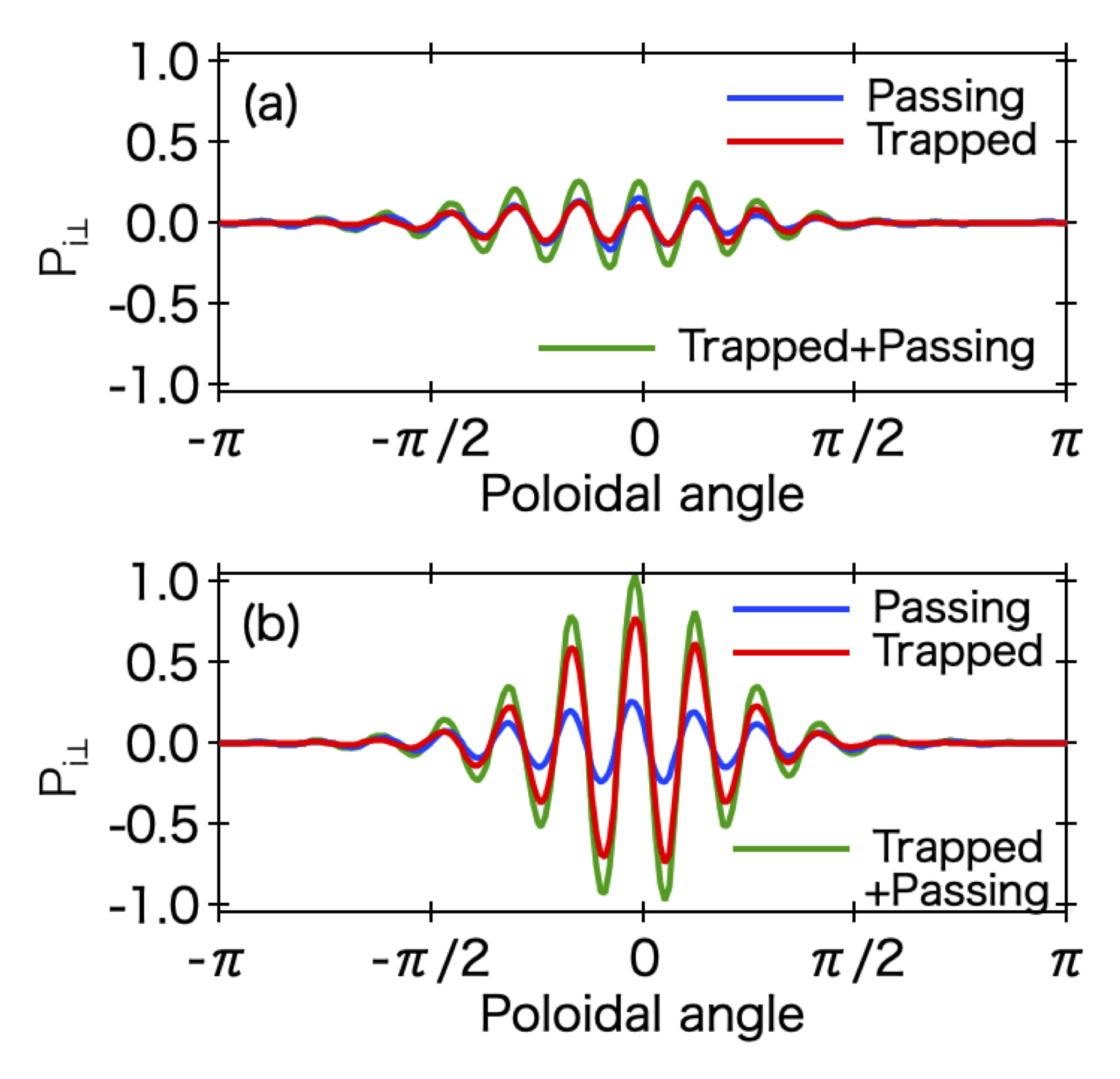 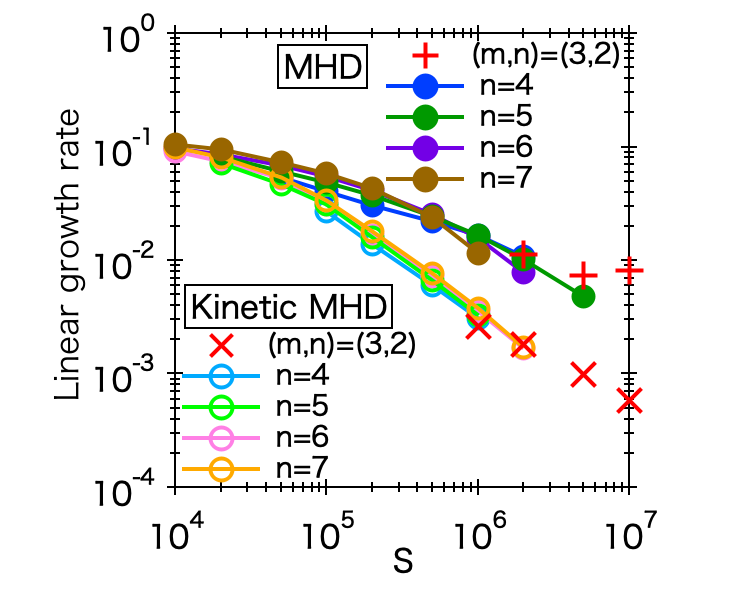 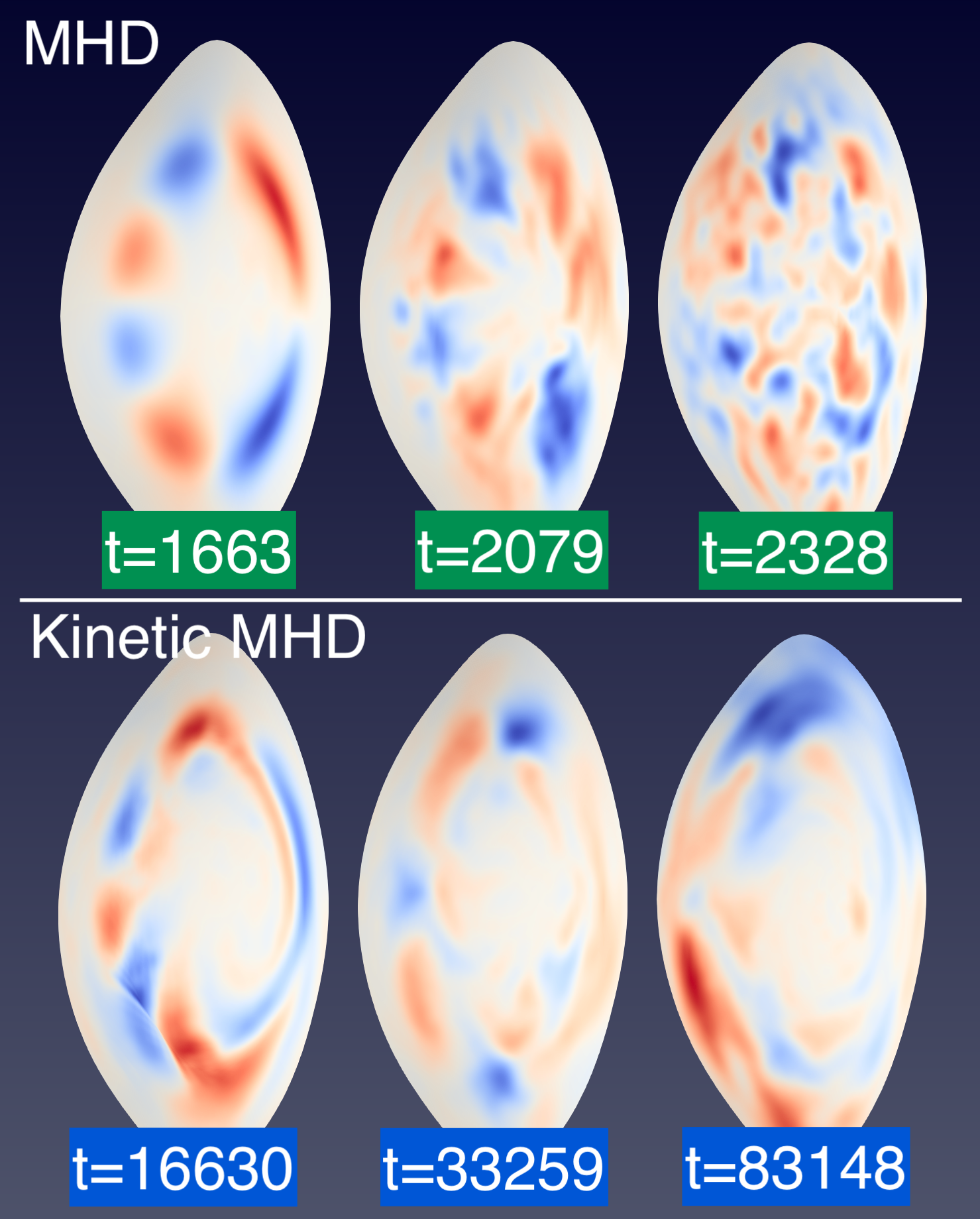 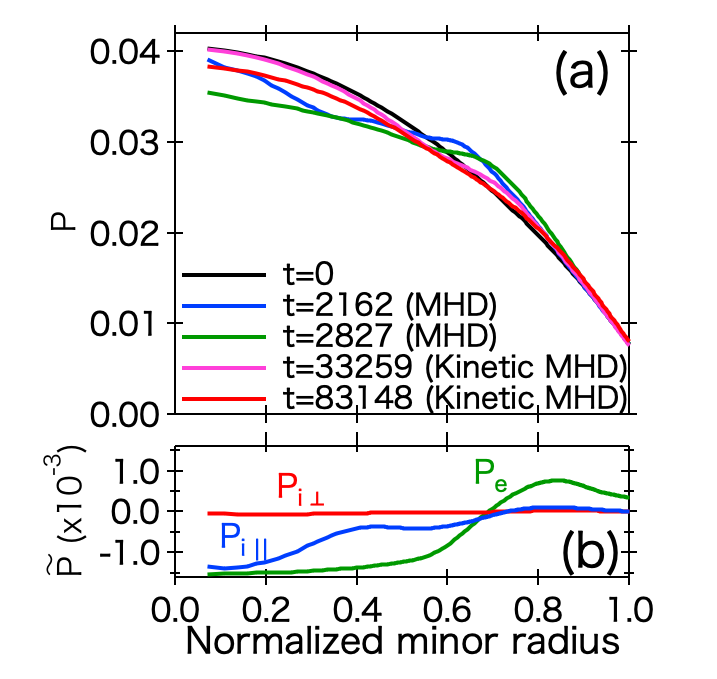