Edge Localized Modes (ELMs) comprising of repetitive plasma eruptions from the edge of a tokamak plasma are a very common feature of high confinement mode (H-mode) operation in advanced tokamak devices. Each ELM outburst is associated with an expulsion of a large amount of energy and particles in a very short time that can potentially cause serious damage to plasma facing components and hence their control and mitigation are a major concern for safe tokamak operation. One of the most successful approaches for ELM control is by the use of resonant magnetic perturbations (RMPs) introduced from the edge of the plasma. A large number of experimental studies as well as theoretical investigations devoted to this topic are currently in progress worldwide. 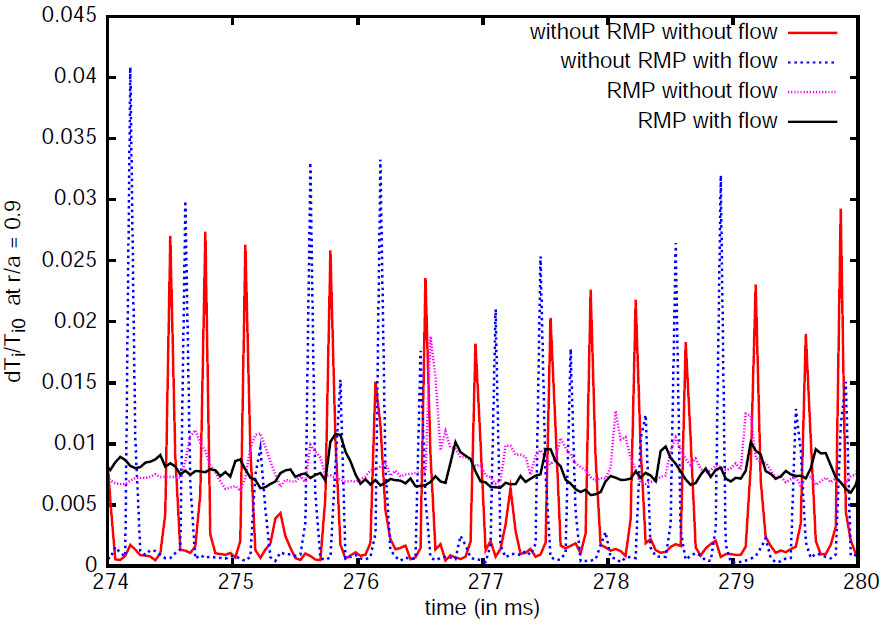 The dynamics of ELMs is quite complex. The linear characteristics of the mode are well modeled in terms of the peeling/ ballooning instabilities$^1$ but their nonlinear evolution is not yet fully understood. Introduction of RMPs further complicates the dynamics and are best studied using numerical simulations. In an actual operational scenario additional physical factors such as plasma rotation can introduce significant modifications in the dynamics of ELMs. A few past studies$^{2,3}$ have shown that toroidal and/or poloidal rotation can significantly influence the stability properties of ELMs. In particular a sheared toroidal rotation is found to stabilize a Type-I ELM whereas a poloidal rotation can be either stabilizing or destabilizing depending on the direction of the flow. Some of these effects have also been experimentally identified. In the light of the above findings it is important to investigate what happens to the efficacy of RMPs in the presence of plasma rotation. Our present study is devoted to such an investigation.

We have carried out detailed nonlinear simulations to study the dynamics of ELMs in the presence of a n=2 resonant magnetic perturbation. The simulations have been done on the Culham Transporter of Ions and Electrons (CUTIE) code$^{4,5}$ - a two-fluid initial value electromagnetic nonlinear global code which solves the full set of model two fluid equations at a scale intermediate between the device size and the ion gyro-radius and takes account of classical and neoclassical transport effects. A periodic cylinder model of the tokamak geometry is adopted with the toroidal curvature effects of the magnetic field lines kept to first order in the inverse aspect ratio. Poloidal mode coupling is implemented through additional curvature terms. ELMs are simulated by introducing a particle source in the confinement region and a particle sink in the edge region. CUTIE is capable of simulating multiple edge relaxation periods and has in the past also successfully modeled the L-H transition behavior in COMPASS-D$^4$. More recently CUTIE has been used to study ELM dynamics in the presence of RMPs$^6$ as well as pellet injection$^7$. 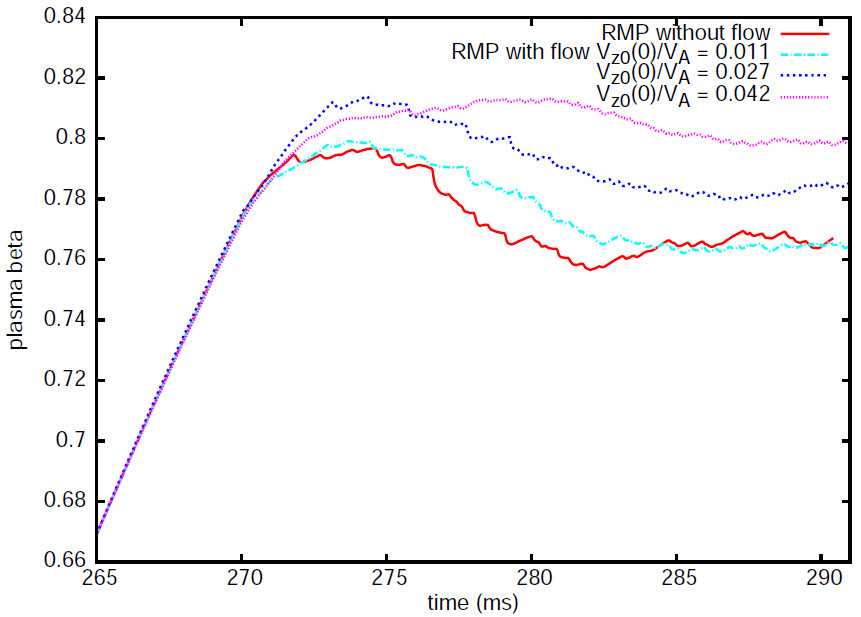 To study the effect of plasma rotation, we have introduced a toroidal momentum source to generate an equilibrium plasma rotation. An external magnetic perturbation of n=2 is also present to simulate the effect of RMPs. Our principal findings are as follows. The presence of flows significantly impacts both the magnitude and frequency of the ELM modes. In Fig.1 we show the time evolution of the ion temperature fluctuations (dTi/Ti0) for various situations e.g. with or without the presence of RMPs and flows. We see that the presence of a toroidal flow in the co-current direction has a positive impact on the mitigation process. In particular, the amplitudes of the ELM bursts are seen to be significantly diminished and their frequencies increased. This also leads to an overall improvement of the energy confinement and an increase in the plasma beta. This is shown in Fig. 2 for the various cases. The flow values that we have used at the axis are M= 0.011, 0.027 and 0.042 where M the Mach number is defined in terms of the Alfven velocity. Such flows are likely to be present in tokamaks either due to external driving from neutral beams or spontaneous generation from turbulence effects. Other noticeable changes (not shown) are in the profile modifications at the edge and the spectra of energy transfer. In general we also find that a co-current flow is more effective than a counter-current flow – in fact a large counter-current flow actually reduces the stabilizing influence of the RMP. Our results could be of direct relevance to present day experiments on RMP control of ELMs on tokamaks like DIII-D where substantial sheared flows can exist due to unbalanced NBI injection$^8$.