In MagLIF, a centimeter-scale cylindrical tube, or “liner,” is filled with a fusion fuel (typically deuterium gas), pre-magnetized using an axial magnetic field of 10-20 T using Helmholtz coils, pre-heated to an average temperature of 100-200 eV via a kilojoule-class laser, and finally radially imploded over ~100 ns via the Lorentz force to velocities of ~70 km/s using 15-20 megaamperes of current from the Z Machine. This process is schematically demonstrated in Figure 1. The laser preheat increases the initial adiabat of the fuel, which is then compressed in a quasi-adiabatic implosion to reach fusion-relevant conditions. The axial magnetic field, which flux-compresses to >1000 T near peak convergence, limits thermal conduction losses from the hot fusion fuel to the comparatively cold liner walls during the implosion and simultaneously increases trapping of charged fusion particles in the narrow radial direction during stagnation. 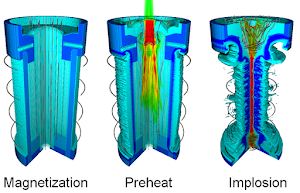 The first MagLIF experiments demonstrated that the axial magnetic field, the laser preheat, and the implosion are all required to generate thermonuclear fusion yields. Without any of these inputs, no significant yield could be generated. Utilizing pure deuterium fuel, these experiments produced multi-keV fuel temperatures, neutron energy spectra consistent with a thermonuclear plasma, and produced yields up to 2x1012 neutrons—a DT equivalent energy of 0.3 kJ.4 Analysis of the secondary deuterium-tritium (DT) neutrons demonstrated the fuel column was highly magnetized, with the fuel radius exceeding the average Larmor radius of DD-produced fast tritons, a promising and necessary requirement for trapping of alpha particles.5,7

Subsequently, our efforts have focused on improving the stability of liner implosions, increasing the fuel preheat energies, and simultaneously increasing the applied magnetic field and current delivered. Controlling the magneto Rayleigh-Taylor (MRT) instability is required to achieve uniform compression and minimize areal density variations in the liner. Simulations suggested that applying a dielectric coating to our beryllium liners would mitigate the early-time electrothermal instability,8 which is believed to seed the more deleterious MRT instability. Experiments verified this stabilizing effect9 and have produced highly uniform stagnation columns compared to uncoated targets, as shown in Figure 2.

To increase the laser preheat, we developed a new laser platform that incorporates phase smoothing10 of the laser beam in addition to a ~20 J pre-pulse that disassembles the laser-entrance window (a thin polyimide foil) on the top of the target that is required to initially contain the fusion fuel. This platform demonstrated an energy coupling efficiency of ~50% of the main ~2 kJ laser pulse to the fuel and simultaneously reduced mix from the polyimide foil into the fusion fuel.11 The axial magnetic field and current delivered to the target were simultaneously increased from 10 to 15 T and 16.1 MA to 19.4 MA, respectively, by reducing the inductance of the power-feed leading up to the target, increasing the anode-cathode gaps to reduce parasitic current losses, and employing more powerful Helmholtz coils. Simultaneously implementing the increased preheat, axial magnetic field and current delivered resulted in a record MagLIF performance of 1.1x1013 neutron yield (equivalent to 2 kJ DT energy produced), nearly an order of magnitude greater than previous experiments on this platform.

Numerical simulations show additional improvements are attainable by further increasing the applied magnetic field to 30 T, the laser-preheat energy coupled to 6 kJ, and target current to 22 MA, with >100 kJ DT fusion yields produced in 2D simulations using parameters that should be achievable on the Z Machine. Our efforts in the next five years are directed at increasing these input parameters simultaneously. Scaling this target to a next-generation facility is encouraging—fusion yields in excess of 10 MJ are possible with currents of 60 MA, laser preheat energies of 40 kJ, and applied magnetic fields of 19 T. Even larger yields approaching a gigajoule may be possible by propagating the fusion burn into a layer of frozen DT ice on the inside surface of the liner.6,12

Despite the impressive predicted yields, developing MagLIF as an energy producing source will be challenging.13 While the electrical energy delivered to the target is efficient (5-10%), it also generates a destructive post-shot explosion (even in the absence of fusion yields) that destroys the metallic power feed that delivers current to the target, limiting present-day operations to a single shot per day. Gigajoule producing targets would produce a tremendous number of neutrons that could adversely affect pulsed power components while activating materials to potentially hazardous levels. Conceptual solutions to these problems have been investigated, including recyclable transmission lines14 and neutron-absorbing blankets;15 however, our present efforts in MagLIF are directed towards demonstrating the fundamental physics and possibility of attaining significant fusion gains on larger-scale facilities. Surmounting this scientific difficulty remains the first obstacle towards harnessing a magneto-inertial fusion-energy producing system.

This paper describes objective technical results and analysis. Any subjective views or opinions that might be expressed in the paper do not necessarily represent the views of the U.S. Department of Energy or the United States Government.

Sandia National Laboratories is a multimission laboratory managed and operated by National Technology and Engineering Solutions of Sandia, LLC., a wholly owned subsidiary of Honeywell International, Inc., for the U.S. Department of Energy’s National Nuclear Security Administration under contract DE-NA-0003525.