A new era of predictive integrated modeling has begun. The successful validation of theory-based models of transport, MHD stability, heating and current drive, with tokamak measurements over the last 20 years, has laid the foundation for a new era where these models can be routinely used in a "predict first" approach to design and predict the outcomes of experiments on tokamaks today. The capability to predict the plasma confinement and core profiles with a quantified uncertainty, based on a multi-machine, international, database of experience, will provide confidence that a proposed discharge will remain within the operational limits of the tokamak. Developing this predictive capability for the first generation of burning plasma devices, beginning with ITER, and progressing to tokamak demonstration reactors, is a critical mission of fusion energy research. Major advances have been made using this predict first methodology. Extensive predictive modeling has informed the planning for the JET D-T campaign. This includes integrated modeling of JET hybrid regimes with newly upgraded heating sources, for various concentrations of deuterium D and tritium T. The self-consistent profiles of tungsten, ion and electron temperature, toroidal rotation and densities, have been predicted using theory-based turbulence and neoclassical transport models. The EPED model predicts it is possible to access the, higher pressure, super-H pedestal regime for JET achievable shapes. This prediction has been confirmed with DIII-D experiments. Super-H experiments on JET are planned. A new high accuracy neural network fit to the QuaLiKiz transport model has been completed, opening the way to time dependent predictions, at near real time speed, of complete tokamak discharges. Neural network fits to the TGLF and Multi-Mode models are progressing. The EAST tokamak is using predictive modeling to optimize the high bootstrap fraction regime for fully non-inductive operation and to plan future upgrades of power and current drive systems. A new integrated modeling workflow called TRIASSIC is being developed and tested on the KSTAR tokamak. Predictive modeling of CFETR is informing the design activity. ITER is using predictive modeling to simulate phases of the experimental operations plan. An overview of several of these recent advances will be presented, providing the integrated modeling foundations of experimental successes, as well as progress towards the goal of integrated predictive modeling for experimental design. Two examples, selected from the many advances in the prediction of tokamak experiments, are summarized in this synopsis.
1st example: The fast response of cold pulses due to impurity injection in tokamaks, with an inversion of the inward electron temperature pulse from decrease to increase, has long been argued to be inconsistent with a local transport paradigm [1]. The first demonstration that the cold pulse temperature response could be captured by a local turbulence transport model (TGLF [2]) was performed for the C-MOD tokamak [3]. Only electron and ion temperatures were predicted in these cases, with the density profile being evolved in a prescribed way. It was found that the inversion of the electron temperature pulse from decrease to increase was caused by the stabilization of the trapped electron mode (TEM) by the flattening of the electron density profile. In discharges where the TEM mode was not dominant there was no inversion in agreement with experiment. The transport model was then used in predict first method to simulate the cold pulse response [4] in the DIII-D tokamak. The very fast, high spatial resolution, density profile data on DIII-D confirmed the speed of the prescribed density response and the electron temperature response predictions were confirmed. The final step was to prove that the TGLF model could predict the fast density response to the impurity injection. This required adding the injected impurity density to the transport modeling. This integrated modeling was performed for experiments on the ASDEX Upgrade tokamak [5]. The predicted electron temperature response is compared with data in 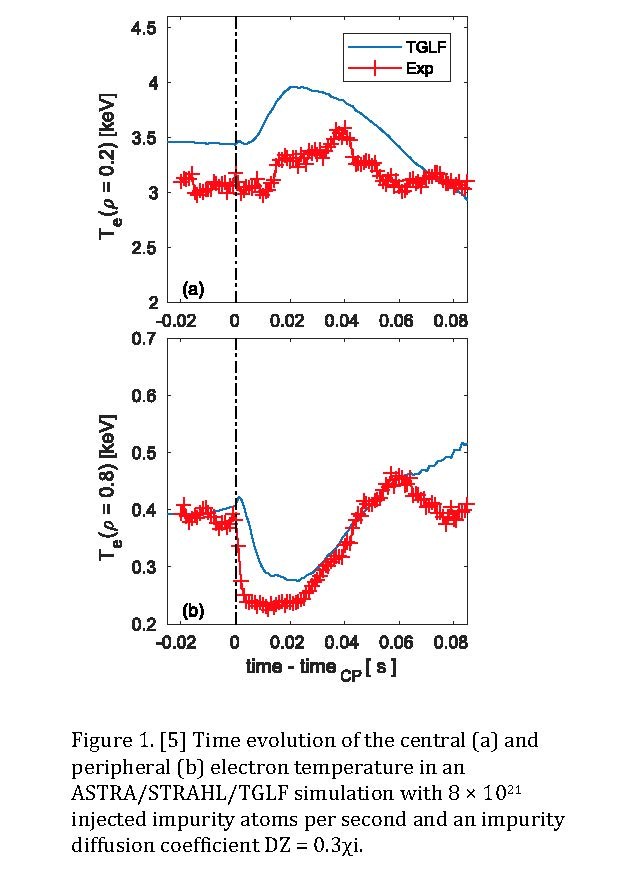 It was found that the destabilization of the ion temperature gradient mode (ITG) by the transiently hollow impurity profile increased the speed of propagation of the electron density pulse into the core. Thus, the speed of the combined electron, ion, and impurity, temperature and density pulses were accurately modeled and new physics insights were discovered. This is a convincing proof that local turbulence transport can account for the paradoxical cold pulse phenomenon.
2nd example: The new upgrades to off-axis NBI current drive capability on DIII-D were preceded by state of the art integrated modeling [6] illustrated by the advanced tokamak predictions in