Dimensionless experiments test the invariance of plasma physics to changes in the dimensional plasma parameters, when the canonical dimensionless parameters, such as rho_star, nu_star, β, q, ... are conserved [1], [2]. In particular, isotope identity experiments exploit the change in isotope ion mass A = mi/mp to obtain plasmas with identical dimensionless profiles in the same tokamak. In order to keep rho_star, nu_star, β and q fixed when also varying A, the plasma current, toroidal magnetic field and the density and temperature must scale, respectively, as I_P, B_T ~ A^(3/4), n ~ A and T ~ √A [3]. However, conditions at the plasma boundary, such as influx of neutral particles, may introduce additional physics, potentially invalidating this approach. Moreover, although the isotope mass appears explicitly only in the parameter rho_star_i, changing A in experiment will affect all plasma kinetic profiles, both in the core and edge plasma, therefore achieving an isotope identity is not trivially expected a priori.

An isotope identity pair was first obtained in JET with C wall (JET-C), with Type I ELMy H-modes in H and D [3]. Remarkably, the scaled thermal energy confinement time Ωi τE,th = B τE,th/A (with Ωi the ion cyclotron frequency), scaled ELM frequency, A f_ELM/B, and scaled sawtooth frequency, A f_saw/B, were all matched, confirming the invariance principle throughout the entire plasma radius despite the different physics processes governing the edge, core confinement and plasma centre regions [3]. We have revisited the isotope identity technique in JET with Be/W ITER-like wall (JET-ILW) with H and D plasmas, both in L-mode and type I ELMy H-mode regimes. Additional aspects are addressed, compared to [3]: i) improved edge kinetic profiles enable careful assessment of profile similarity in the H-mode pedestal region, whose confinement and linear MHD stability is strongly affected by neutrals in JET-ILW [4], [5]; ii) we also seek similarity of the Mach number profile, M ~ ω_tor R √mi/√ kTe (toroidal rotation velocity normalized to ion sound speed) and investigate the role of rotation and ExB shear on the heat and particle transport channels, as ExB shear is the relevant parameter for stabilization of Ion Temperature Gradient (ITG) turbulence, which dominates in the core of NBI-heated JET-ILW plasmas.

An L-mode isotope identity pair was obtained in H (1.44MA/1.74T) and D (2.5MA/3.0T) NBI-heated plasmas [6]: the rho_star, nu_star, beta, q and Ti/Te (= 1) profiles, as well as the line averaged Zeff (=1.4) were all matched in the core confinement region, where the dominant instabilities are ITG modes for both isotopes. The dimensionless thermal energy confinement time, Ωi τE,th, and the scaled core plasma heat diffusivity, A χeff/B_T, are identical in H and D within error bars, indicating lack of isotope mass dependence of the dimensionless L-mode τE,th. This result is broadly consistent with the weak, positive isotope scaling of the dimensional τE,th in NBI heated JET-ILW L-modes [7], which originates at the plasma edge, where both particle and heat transport are larger in H than in D [7], [8]. The scaled input power required to obtain the identity, P_abs/B_T^(5/3), is indeed consistent with Bohm-like transport [9]. Predictive flux driven simulations of the H and D identity pair with JETTO-TGLF are in very good agreement with experiment for both isotopes: the stiff core heat transport, typical of JET-ILW NBI heated L-modes, overcomes the local gyro-Bohm scaling of gradient-driven TGLF, explaining the lack of isotope mass dependence in the core confinement region of these plasmas [6]. Although the M-profiles are not matched in H and D (but within 50% from each other), the effect of E×B shearing on the predicted heat and particle transport channels is found to be negligible for these low beta and low momentum input plasmas [6].

In type I ELMy H-modes, an isotope identity pair was obtained in H (H-NBI, 1.0MA/1.0T) and D (D-NBI, 1.7MA/1.7T), with low triangularity (delta) plasma shape. The companion tritium plasma (T-NBI, 2.3MA/2.3T) is planned for the upcoming JET-ILW campaign in tritium. The scaled ne and Te profiles were matched in H and D over ~ 25 x τE,th’s - both in the core and pedestal regions (see Figure 1) - as well as the q, Ti/Te (=1) profiles and line averaged Zeff (= 1.4). Matching the scaled ELM frequency (A f_ELM /B_T = 54 Hz/T) - using f_ELM control via feedback on gas injection in the D discharge - was key to achieve similarity of the scaled pedestal density profiles. This is because ne,PED decreases with increasing f_ELM in low delta JET-ILW type I ELMy H-modes [4], where the ELM losses are primarily convective. While the input power required to obtain the isotope identity, P_abs ~ B_T, is consistent with gyro-Bohm transport [9], Ωi τE,th increases strongly with A, in line with the strong isotope mass scaling derived from the regression of the dimensional energy confinement time of H and D type I ELMy H-modes, τE,th ~ A^0.4 [7], [10]). The Mach-number profiles are not identical in H and D, but the ExB shear is similar for both isotopes, suggesting the latter as the relevant parameter (and not M) for achieving the identity in ITG dominated H-modes.

In the isotope identity experiments presented here we have sought a match in the ion rho_star, as implicitly assumed in the theory of [1], therefore the electron rho_star profile, rho_star_e = (me Te)^(1/2)/(a B_T) is not matched. As verified experimentally, this is justified in our case because the plasmas are ITG dominated in the confinement region. On the other hand, in plasmas where electron scale turbulence dominates, matching rho_star_e and not rho_star_i would be required. Thus, care must be taken when using wind tunnel experiments to extrapolate to future experiments [11]. It is doubtful whether this approach would be valid in plasmas where ion – and electron-scale turbulence co-exist with similar strength. 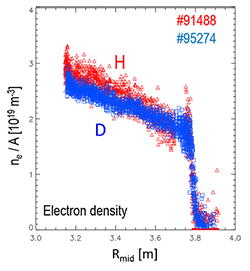 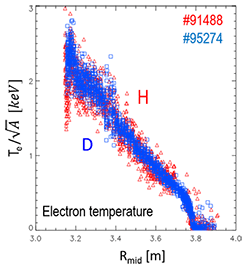 Acknowledgements. This work has been carried out within the framework of the EUROfusion Consortium and has received funding from the Euratom research and training programme 2014-2018 and 2019-2020 under grant agreement No 633053. The views and opinions expressed herein do not necessarily reflect those of the European Commission