Novel disruption prevention solutions spanning the range of control regimes have been developed and tested on DIII-D to enable ITER success. First, the disruption risk during fast, emergency shutdown after large tearing and locked modes can be significantly improved by transitioning to a limited topology during shutdown. More than 50% of limited shutdowns reach a final normalized current $I_N$ < 0.3 before terminating (Fig. 1), scaling to the 3 MA ITER requirement. This is in contrast to diverted shutdowns, the majority which disrupt at $I_N$ > 0.8. Despite improvements, these results highlight the critical importance of early prevention. Second, a new control algorithm has been developed and tested for regulating nearness to stability limits in real-time. Its first application reliably prevented vertical disruptions (VDEs) by adjusting plasma elongation ($\kappa$) and the inner-gap between the plasma and inner-wall in response to a neural-network based VDE open-loop growth-rate ($\gamma$) estimator (Fig. 2). Third, a novel emergency shut down method has been developed which excites MHD instabilities to form a warm, helical core post-thermal quench {1}. The current quench extends to ~100ms and avoids VDEs and runaway electron generation (Fig. 3). Novel real-time machine learning disruption prediction {2} has been integrated into the DIII-D plasma control system (PCS), and a multi-mode MHD spectroscopy technique has been developed which is real-time compatible. 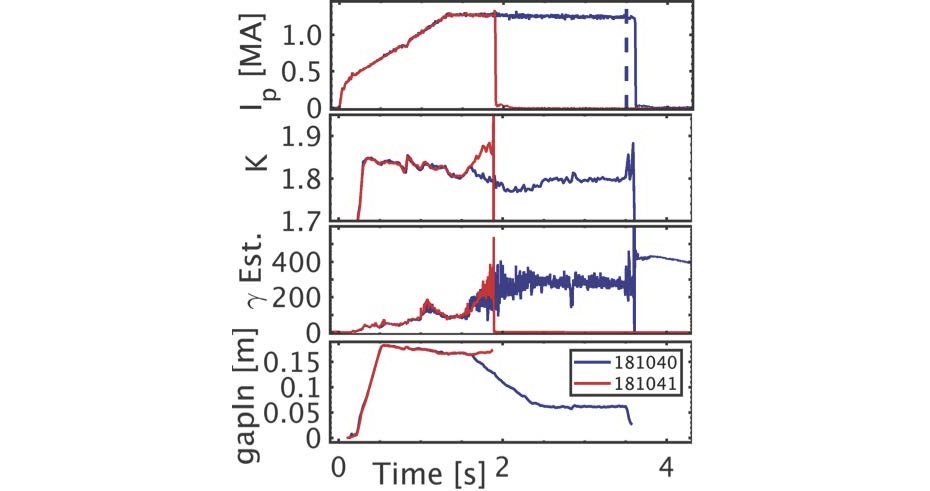 The disruption risk during emergency shutdown in response to large tearing and initially-rotating locked modes is significantly improved by using a limited topology during shutdown. In over 100 discharges, an early, rapid shutdown was triggered on large n=1 rotating mode amplitude or non-rotating locked-mode amplitude to assess its effectiveness under these dangerous conditions. Fast $I_p$ ramp-down rates of 2-3 MA/s and sustained, modest NBI heating were applied, which minimized disruptivity in a previous large-scale study of pre-programmed shutdowns {3}. As the stored magnetic energy is proportional to $I_p^2$, the appropriate metric for emergency shutdown success is the final value of Ip reached before current quench. ITER 15 MA discharges must reach $I_p$ < 3 MA before disrupting, corresponding to $I_N$ < 0.3. Rapidly transitioning to a limited topology in shutdown can dramatically reduce the final $I_N$ reached before terminating, with as much as 50% of shots below the ITER limit (Fig. 1). This is in contrast to maintaining a diverted topology, which results in less than 20% of discharges reaching safe final currents, and the majority disrupting above $I_N$ > 0.8. ITER tolerance to a limited topology is an open question, and likely depends on whether an unintentional H-L back-transition has already occurred before attempting an emergency shutdown. Nonetheless, the risks must be weighed against the danger of high-current disruption. While significant improvement is found with limited emergency shutdowns, early prevention and reliable mitigation will be critical to meet ITER disruption tolerances.

A new proximity-to-instability regulation algorithm (the “Proximity Controller”) has been developed for real-time disruption prevention on DIII-D, and first applied to prevent VDEs in experiment. The VDE open-loop growth-rate ($\gamma$) was robustly regulated at safe levels of 300-400/s for > 2s, despite a pre-programmed ramp in $\kappa$ intended to induce VDEs (Fig. 2). Without the controller active, these discharges ended in disruption. However, disruptions were prevented in all discharges which used VDE protection via the Proximity Controller, until the time the controller was intentionally disabled. The open-loop-$\gamma$ was estimated using a novel, real-time, neural-network-based reduced model trained on tens of thousands of time slices, and included uncertainty estimation. The growth-rate was used to continuously modify targets for the plasma elongation and inner-gap. The controller is being extended to additional real-time stability calculators and control targets for 2020 experiments.

A new soft-landing alternative has been developed that routinely enables high-current ($I_p$ ~1.7 MA) discharges to survive major disruptions (Fig. 3). The technique destabilizes core MHD instabilities in the post-TQ plasma with the aid of applied 3D fields, after which flux surface healing is observed. A helical core is promptly formed and warmed by neutral beam and ohmic heating {1}. In combination with impurity puffing, the plasma current quench duration greatly extends to ~100 milliseconds with a warm core, avoiding the generation of runaway electrons for optimal mitigation. This points to a safe emergency termination alternative. The underlying physics mechanism is under active investigation.

Advanced machine learning and multi-mode MHD spectroscopy (MMS) techniques for plasma stability monitoring have been developed for real-time use. A random-forest machine learning algorithm for disruption prediction has been implemented into the DIII-D PCS {2} and used to trigger fast, emergency shutdowns for disruption prevention (see C. Rea et al this IAEA FEC). MMS based on subspace system identification has been demonstrated as feasible for detecting plasma eigenmodes in real-time, and is being implemented in the DIII-D PCS.

This work was supported in part by the US Department of Energy under DE-FC02-04ER54698.