ITER high Q operation requires the integration of high performance plasmas with high plasma density, good fast ion confinement with acceptable stationary and transient power fluxes to plasma facing components (1). To control transients associated with high performance plasmas (Edge Localized Modes or ELMs), ITER is equipped with a set of in-vessel coils that modify the edge magnetic field structure from 2-D to 3-D (so called Resonant Magnetic Perturbations or RMPs) thereby achieving the required control. While ELM control using this approach has been demonstrated in many tokamak experiments, there remain open issues regarding its integration with other requirements essential to achieve high Q operation in ITER, such as its effect on the achievable energy, particle and fast ion confinement, compatibility with semi-detached/radiative divertor operation, low input torque operation, pellet fueling, etc.

To address these integration issues a series of experiments has been carried out at the EAST tokamak in ITER-like H-mode plasmas with q_95 ~ 3.7, normalized plasma beta β_N ~ 1.7 and with NBI injected torque T ~ 0.3-0.4 Nm, which is similar (somewhat lower) to the normalized torque input of ITER plasmas with 33 MW of NBI. Control of ELMs has been explored with n = 2 and n = 4 symmetry for the toroidal waveforms of the currents applied to the EAST in-vessel ELM control coil set, which is composed of two rows of 8 coils above and below the midplane at the low field side of the tokamak (2). The magnitude of the applied current and the toroidal phase of the applied perturbation (for n = 2) has been scanned and their effects on energy and particle confinement, NBI fast ion losses and divertor power fluxes has been characterized.

As shown in Fig. 1 ELM suppression can be achieved with both n = 2 and n = 4 with similar levels of current in the RMP coils (12 kAt). However, the decrease of particle and energy confinement associated with the achievement of ELM suppression is much larger for n = 2 (30%) than for n = 4 (< 10%). This supports the use higher n RMP perturbations to optimize ELM suppression with regards to energy and particle confinement as required for ITER, where n = 3 or 4 are considered. It is important to note that ELM suppression with n = 4 RMPs can be achieved in a range of density 〈n_e 〉=0.4-0.6 n_Greenwald thereby having an upper and a lower density level.

Because of the lower effects on energy and particle confinement of n = 4 RMP, as required for ITER, the compatibility of pellet fueling with ELM suppression was investigated in this configuration. As shown in Fig. 2 the injection of pellets leads to sudden increases of the plasma density and to spikes in the D_alpha signal from the divertor. However, unlike ELMs, these are not accompanied by an increase in the divertor heat fluxes, unlike the ELMs that are triggered when no RMPs are applied. This is consistent with non-linear MHD simulations of pellet injection in H-modes that always show triggering of MHD activity when pellets are injected but not growing exponentially to trigger ELMs in all cases (3). When successive pellets are injected (10 Hz was used in experiments) and the plasma density increases beyond 0.65 n_Greenwald, ELM suppression between pellets is lost in a similar fashion as with gas fueling described below.

Studies have also been performed to investigate the integration of ELM suppression with radiative/semi-detached divertor operation for n = 2 and 4 RMPs. It has been found that divertor power flux reduction can be achieved while maintaining ELM suppression either by gas fueling or increasing intrinsic impurity radiation by Ne seeding. The reduction of the power flux is larger for the former approach as shown in Fig. 3, although ELM suppression is lost when the density increases to high values.

Interestingly, the divertor power flux and temperature decrease in both near separatrix and off-separatrix lobes, which is in contrast with previous EAST experiments in which ELM control was achieved by LHCD (4). This is consistent with the field line mapping shown in Fig. 3 (with TOP2D in the vacuum approximation) indicating that the outer lobes field lines in this n = 4 are not connected to plasma regions deep inside the separatrix (the pedestal plasma corresponds to 1-ρ_min ~0.05).

The paper will describe the detailed analysis of the wide range of experimental measurements obtained (including NBI losses) and will discuss implications for ITER. 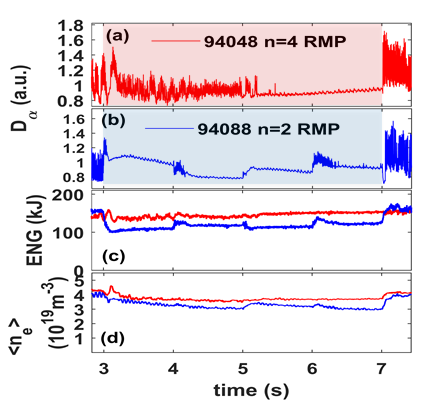 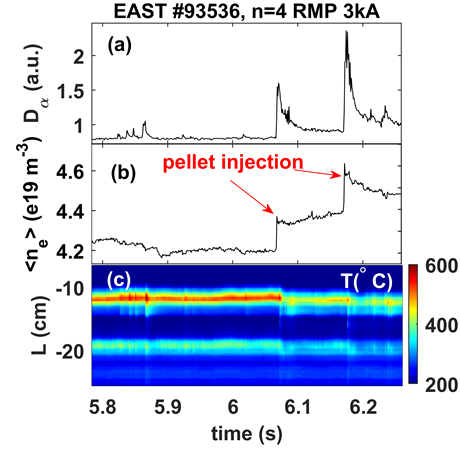 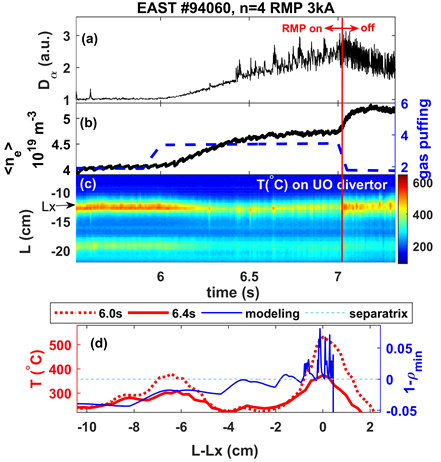