This is the first report of spontaneous Internal Transport Barrier (ITB) formation in reversed magnetic shear plasmas by full-$f$ gyrokinetic simulations with kinetic electrons. We found that (1) a strong mean $E_r$ shear is formed near $q_{min}$ region in flux-driven Ion Temperature Gradient (ITG) turbulence, leading to spontaneous reduction of ion turbulent thermal diffusivity, while it is not observed in adiabatic electron case; (2) a robust co-intrinsic rotation is driven near $q_{min}$ surface and sustain the mean $E_r$ through the radial force balance, which physical mechanism is identified by momentum transport theory; (3) in the presence of electron heating, a counter-intrinsic rotation by Trapped Electron Mode (TEM) turbulence is selectively driven in negative magnetic shear region, leading to steeper $E_r$ shear and resultant larger reduction of ion turbulent thermal diffusivity. These results indicate that the co-existence of different modes can trigger the discontinuity near $q_{min}$, leading to spontaneous ITB formation.
Internal transport barrier, which acts as the shielding layer of particle and heat transport by suppressing turbulence, has a crucial key to achieve high-performance plasma confinement. In recent HL-2A discharge with co-NBI, ITB is formed in the almost flat $q$ profile region, in which mean flow triggered by toroidal rotation plays a dominant role in sustaining ITB. On the other hand, according to the NBI modulation test in JT-60U reversed magnetic shear discharge [i], they found that after the change from balance-NBI to co-NBI, ITB is suddenly collapsed because mean flow shear in outer half ITB region becomes weak in addition to the change of toroidal rotation shear. These indicate that not local but global pattern of mean $E_r$ is crucial for ITB formation. For the comprehensive study of such global effects, we have investigated the effect of momentum injection for ITB formation [ii] by means of our 5D full-$f$ gyrokinetic code GKNET [iii-iv], which can trace self-consistent profile evolutions coupled with mean $E_r$ through the radial force balance, even in weak/reversed magnetic shear plasmas not like $\delta f$ code. We found that toroidal rotation shear in outer region can change mean $E_r$ shear through the radial force balance, leading to ITB formation in which the ion thermal diffusivity decreases to the neoclassical transport level. However, enough large momentum injection, which is proportional to plasma size, was required for ITB formation in our previous work based on adiabatic electron model.
In this work, we have introduced a kinetic electron process based on hybrid electron model, in which trapped electrons are fully kinetic while passing electrons are adiabatic except $(m,n)=(0,0)$ one. Based on this model, we performed flux-driven ITG/TEM simulation for reversed magnetic shear configuration with $q(r=0.6a_0 )=q_{min}=1$. Figure 1 shows the time-spatial evolution of $E_r$ in (a) flux-driven ITG turbulence with adiabatic electrons, (b) ITG turbulence with kinetic electrons and (c) ITG/TEM turbulence with kinetic electrons. Here, we set only ion heating near magnetic axis in ITG case but both ion and electron heating near magnetic axis in ITG/TEM case. Figure 1 shows that the stable local maximum of $E_r$ is formed near $q_{min}$ surface only in the kinetic electron cases. This is because the kinetic electron dynamics can provide a finite phase difference between density perturbation and electrostatic potential, leading to more unstable linear ITG/TEM instability and resultant zonal flow generation.
Interestingly, we also found a robust net toroidal rotation around $q_{min}$ surface as is shown in Fig. 2 (a). According to the momentum transport theory, the residual stress part of momentum flux is given by $\langle\Pi_{RS}\rangle_{\theta\varphi}=\alpha I E_r'+\beta I'+\gamma \langle k_{\theta}k_{\varphi}\phi^2\rangle$, which first and second terms work to reduce diagonal momentum diffusion, which is confirmed by the correlation analysis. On the other hand, the steep electron temperature gradient selectively destabilize TEM in the negative magnetic shear region, where the ITG mode is relatively stable. This makes an opposite intrinsic rotation (see the red line among $0.2a_0 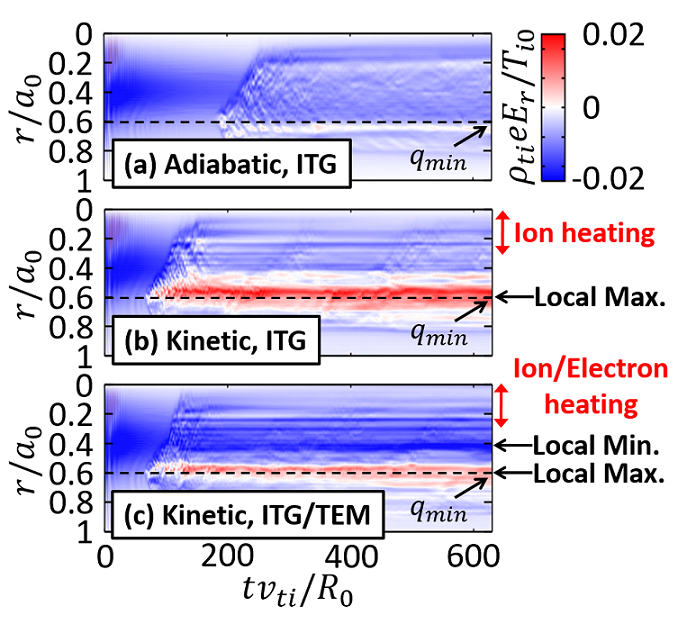