Sudden increase of the energy confinement time by 38% is observed during divertor detachment operation with RMP application in deuterium plasmas in LHD. Edge transport barrier (ETB) is formed during the RMP induced H-mode phase at the inner separatrix of magnetic island created by the RMP, leading to steepening of pressure profile while the detachment is maintained. Such behavior has been observed neither without RMP nor in hydrogen discharges to date. During the RMP induced H-mode, MHD activity is detected in magnetic probe, and high charge state impurity emission decreases indicating decontamination of core plasma. Core plasma transport analysis shows clear decrease in the transport coefficient after the detachment transition and in the subsequent RMP induced H-mode phase. The present results have revealed, for the first time, the impact of 3D edge magnetic field structure and isotope effect on core plasma performance during divertor detachment operation that provides important perspective toward integrated performance in future reactors.
Compatibility of good core plasma performance with enhanced edge radiation to mitigate the divertor heat load is a crucial issue for magnetically confined fusion reactors. It is also not clear yet how 3D edge magnetic field structure affects the divertor heat load and the core plasma transport during detachment either in tokamaks or in stellarators. In LHD, stable detachment control is realized with RMP application of m/n=1/1 mode [1]. The present paper reports new observations on core plasma confinement during divertor detachment operation in deuterium and hydrogen plasmas.
The RMP application creates a magnetic island of m/n=1/1 in the edge stochastic layer, where the impurity radiation is enhanced due to increased volume of cold plasma region. 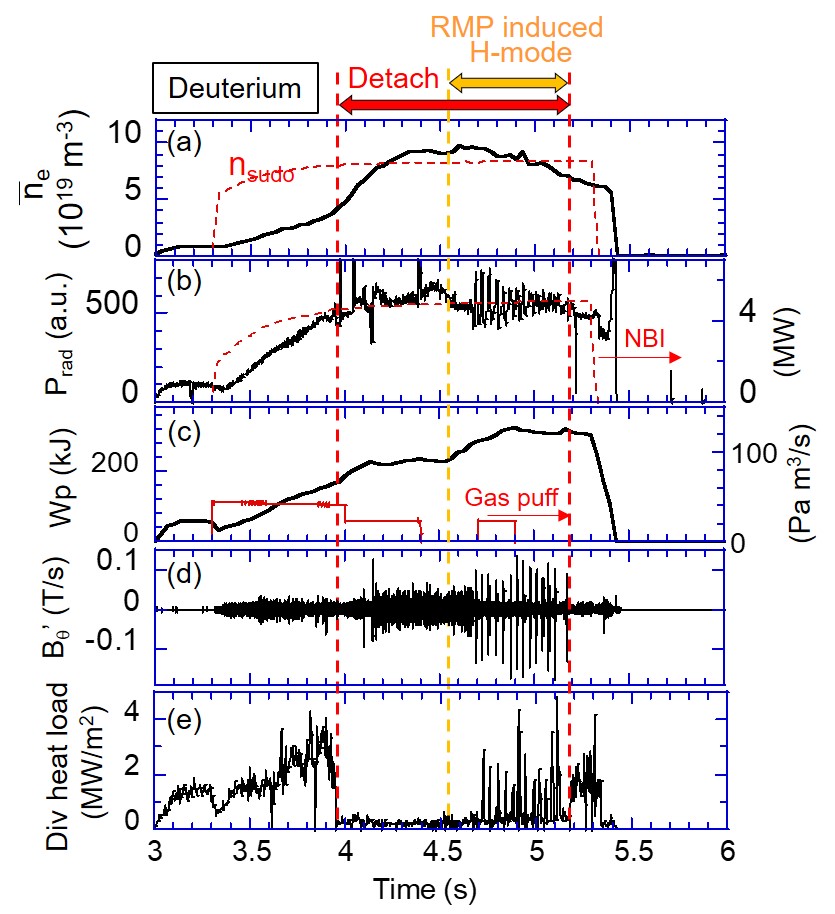 Figure 1 shows time traces of plasma parameters with RMP application in deuterium plasma operation. The total NBI heating power of three beam lines was ~5 MW with injection energy of 152~177 keV (3.6MW in co-direction and 1.4 MW in counter-direction, respectively). Density was ramped up with deuterium gas puff and the radiated power increased as well. The detachment transition occurred at t = 3.95 sec as indicated by the reduction of divertor heat flux in Fig.1 (e). It was found that there appears toroidal modulation in the divertor heat load pattern caused by the m/n=1/1 RMP field mode structure. During the detached phase, the density was increased even further beyond the density limit (nSudo, Sudo limit) (Fig.1 (a)). It was observed that plasma stored energy spontaneously increases at t ~ 4.5 sec by 38%, and spikes appears at the magnetic probe signal and divertor heat flux while the detachment is maintained. Such increase of stored energy during detachment is unique to the deuterium plasmas with RMP application. This phenomenon has never been observed without RMP and in hydrogen plasmas up to now. 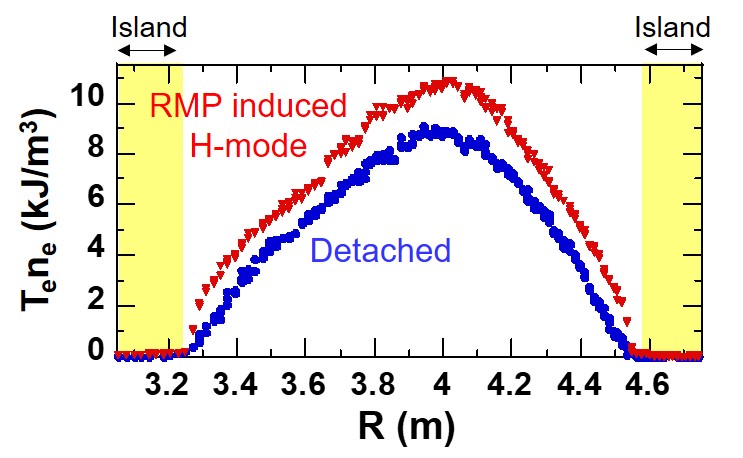 The RMP induced H-mode is accompanied by the ETB formation with steep edge pressure gradient. Figure 2 shows the radial profiles of the plasma pressure at the edge region for deuterium plasmas with RMP application during the detached phase and the subsequent H-mode phase. Due to the strong edge cooling at the island where $T_e$ < 10 eV, the pressure profile is clamped by the edge island in the detached phase. Clear steepening of pressure profile is observed in the RMP induced H-mode phase (red, 5.1 sec), where the ETB is formed at the inner edge of the magnetic island induced by the RMP. 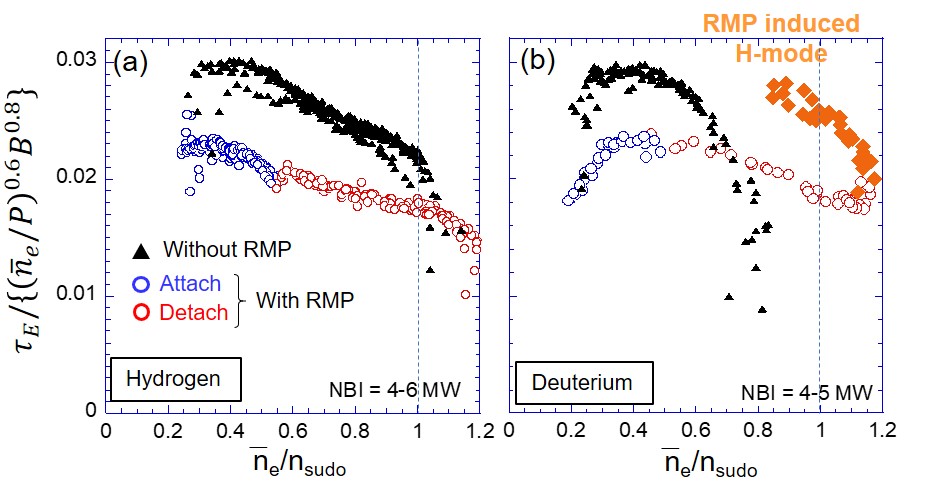 Figure 3 shows energy confinement time, $\tau_E$, scaled by gyro-Bohm dependence, $\tau_E^{GB} \propto (n_e / P)^{0.6} B^{0.8}$. $\tau_E / \tau_E^{GB}$ monotonically decreases with increasing density. The systematically smaller values in the case with RMP application are due to the shrinkage of the plasma volume caused by the edge magnetic island, while heat transport coefficients, $\chi_{eff}$, obtained by transport analysis, show similar values for both cases with and without RMP. It is observed that during the RMP induced H-mode phase the $\tau_E / \tau_E^{GB}$ increases by 38%.

The core plasma transport has been analyzed with TASK3D code by taking into account the NBI heating profile. Figure 4 shows the results of the deuterium plasma. After the detachment transition, the pressure profile as well as the NBI heating profile become peaked (t = 4.3 sec). The peaked heating profiles are attributed to deeper penetration of NBI in the detached phase with shrinkage of plasma volume due to the strong edge cooling. The transport coefficient decreases at almost entire plasma in the detached phase. In the RMP induced H-mode phase (t = 4.9 sec), the pressure profile becomes further steeper at the edge while the NBI heating profile also slightly peaked. The transport coefficient decreases by a factor of 1.6 to 2 at the edge region, $\rho$ ~ 0.8, which corresponds to the inner separatrix of the island as shown in Fig.2 where the ETB is formed.