Introduction. Extrapolations to ITER and DEMO from existing smaller experiments alone are unreliable, especially for turbulent transport - requiring the aid of predictive simulations. The 3D fluid turbulence code GRILLIX [1–4] is used to study confinement improvement through turbulence suppression that is compatible with power exhaust. This contribution describes the validation against experimental edge and scrape-off layer (SOL) measurements from the ASDEX Upgrade tokamak (AUG). Particular focus is put on the role of sheared $E \times B$ flows in turbulence suppression, and the resulting profiles, i.e. fall-off lengths (‘SOL width’). Simulations are also checked against experimental scaling laws [5] over varying parameters, and against smaller machines like C-mod and TCV. Further, we investigate the effect of varying magnetic geometry, in shaped single null as well as in advanced divertor configurations (ADCs).

Verification and validation. We report on the first quantitative validation based on L-mode AUG experiments in standard single null divertor geometry, depicted in Fig. 01. We compare profiles and fluctuations of density and temperature, and the electric field. In agreement with experiment, the ballooning driven fluctuations in the confined region are moderate, < 4%, and rather high in the SOL, > 15%, with highly intermittent events. Obtaining these results was possible after several improvements in the physical model, numerical methods and computational performance. The code has been verified via the method of manufactured solutions [1]. Previously, it was shown to reproduce many features of limited and diverted tokamaks [1, 3], and validated against experimental results from the Large Plasma Device (LAPD) [2], explaining the mechanism of blob formation and propagation. 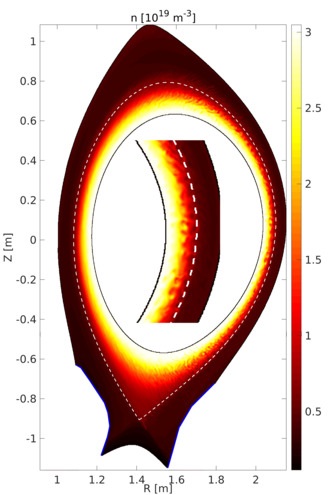 Shear flows and turbulence suppression. $E \times B$ flow shear [6] and magnetic shear [1] at the separatrix suppress turbulence in the pedestal, which is crucial for the desired confinement in ITER. The $E \times B$ flow shear is explained by the experimentally observed jump in the radial electric field $E_r$ across the separatrix. We show that this is due to different underlying mechanisms in the closed and open field line regions: $E_r \approx \partial_r p_\mathrm{i}/n$ in the confined region, transitioning to $E_r \approx −3 \partial_r T_\mathrm{e}$ in the SOL due to sheath boundary conditions [6]. Additional contributions from rotation and Reynolds stress are damped at higher temperature. The resulting pressure and electric field profiles are shown in Fig. 02. 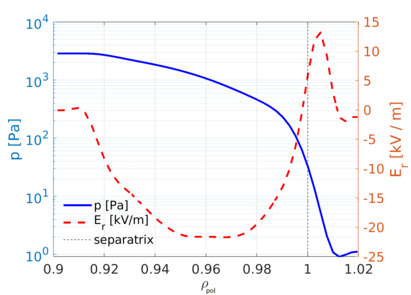 Dedicated framework for diverted tokamaks. The plasma edge and SOL have to be studied together, because edge turbulence is affected by the plasma-wall interaction in the SOL, and SOL turbulence largely spreads from the plasma edge [7]. Their interface, the separatrix, not only allows to separate the plasma-wall interaction in the divertor from the confined plasma, but it also produces strong, turbulence suppressing magnetic shear. Accurately resolving this dynamics is vital for predicting both the heat flux on the divertor, and the confinement properties of the device. GRILLIX is able to do this thanks to the flux-coordinate independent (FCI) approach [8], which allows for a flexible and efficient treatment of arbitrary magnetic geometries.

Multi-scale electromagnetic model. The model in GRILLIX, by keeping all global dependencies [3], describes the evolution of equilibrium profiles together with turbulent fluxes, allowing fluctuations of arbitrary magnitude. This is important for the prediction of pedestal profiles, i.e. fall-off lengths like the SOL width. Electromagnetic effects are crucial in limiting the response of the parallel current via shear Alfvén waves, as opposed to resistivity [1]. However, electromagnetic cross-field transport (due to field-line flutter) is significant only at higher pressure ($\beta$) and primarily for heat.

Advanced divertor concepts. ADCs such as snowflake and Super-X are promising for decreasing the heat flux to reactor walls [9], but their experimental implementation is so far rare. GRILLIX can support advanced divertor design by simulations [4]. In the snowflake divertor, we find a more complex structure of the electric field then in single null: a potential maximum at the magnetic null, i.e. a convective cell, redirects part of the SOL flows to the secondary divertor legs. Together with the increased magnetic flux expansion, this is promising for improving heat exhaust in DEMO.

Parameter scalings. The comparison to experimental multi-machine scalings, such as the SOL width scaling by Eich et al. [5], is facilitated by direct simulations of different machines like AUG, C-mod and TCV, and by parameter scans. Both plasma pressure and collisionality increase turbulent transport through different mechanisms. Larger machine size and larger toroidal magnetic field decrease the vortex size compared to the machine scale, effectively increasing confinement. In addition to magnetic field strength, the shape of the poloidal magnetic field has a significant impact: turbulence can be suppressed both directly through magnetic shear, and indirectly through a different flow pattern. This effect is especially visible near the X-point.

Conclusion. GRILLIX was validated against AUG experiments and checked against multi-machine scaling laws, which is a crucial prerequisite for ITER and DEMO simulations. The code is able to predict turbulent fluxes, including their suppression in the pedestal, as well as the resulting equilibrium profiles, $E_r$ and fall-off lengths like the SOL width. This was shown both in standard single null as well as in advanced divertor concept geometry.