Here we report recent progresses of laser fusion energy research in Japan, especially on the fast ignition scheme. For the fast-track to the laser fusion energy, we are investigating the fast-ignition plasma physics to realize optimal compression of a fusion fuel as well as efficient heating of the compressed fuel. In this scheme, we have demonstrated the efficient heating of high density plasmas with compression of the solid sphere by using a multi kJ lasers. The results imply the FI could have burning of a laser fusion plasma with a few 100kJ including 50-100kJ heating laser. Furthermore, we are developing a high repetition high power laser system: 10kJ/10-100Hz laser system to realize data driven analysis of fusion plasmas for the optimal target design as well as test of laser fusion reactor engineering with a fusion subcritical reactor including fusion power generation. These extensive studies are being made with under the fast ignition consortium and laser fusion strategy committee of IFE forum in Japan.

laser fusion plasma physics for the fast ignition
In the fast ignition (FI) scheme, an ultra-intense laser light generates high energy particles such as relativistic electron beam (REB) to heats a high density compressed fuel. The first demonstration of fast heating of laser compressed fuel1 has been made with a cone geometry for the efficient propagation of the heating laser pulse to generate the REB close to the high density core plasmas.
Details of the heating mechanisms has been investigated through experiments and simulations. In general, REB can heat the core plasma with 3 different mechanisms such as drag heating, return current heating and diffusive heating [2]. The drag and diffusive heating processes are important especially for the efficient heating by REB in the FI scheme. To improve the coupling of REB to the core plasma, the magnetized fast-isochoric heating (MFI) scheme had been designed and demonstrated. Delivering REB with a guidance of external magnetic fields at kT-level had been realized with the GEKKO XII (GXII) + LFEX, a ps/ kJ laser [3]. The REB, which has inherently a large divergence, was successfully guided along the magnetic field lines to the core, resulting twice higher laser-to-core coupling for the drag heating than that in a case without the guidance [4]. Another important heating mechanism in the FI is the diffusive heat driven by a strong radiation pressure of the heating pulse toward the core plasmas [5]. This scheme has been based on the physic of a relativistic laser -plasma interaction and becomes significant with a multi-picosecond kJ laser. The diffusive heating is the main heating process in the current experiment with relatively low density core plasmas, e.g. 0.1g/cm2 [6], and the drag heating will be comparably important in the ignition-scale core (0.3 -0.5 g/cm2).
Improving the coupling of the heating laser to the appropriate energy of REB is also crucial for the efficient heating. One is focusing of multiple coherent laser beamlets spatially and temporally overlapped, thus producing an interference pattern in the laser focus, has significantly improved the laser energy conversion efficiency into the REB, compared to one laser beam with the same energy as the four beamlets combined [7]. Another idea to the higher coupling efficiency is utilization of shorter wavelength laser light to generate relatively lower energy REB, which then has a shorter stopping power. A 527nm laser light will make expectation for future realization of fusion gain of more than 10 with a heating laser energy of 70kJ for the DT fuel with ρR=2 g/cm2 and 500 g/cm3. Furthermore, higher efficiency could be expected with fundamental (1053 nm) and second harmonics (527nm) mixed wavelength laser lights.
Optimal fuel compression for the FI is critical to realize the efficient ignition of the laser fusion. The FI scheme can optimize separately the processes of the fuel compression and the heating of the compressed fuel. We find that a solid spherical fuel target will be more feasible, to stably obtain high-density fuel compression without a risk of the hydrodynamic instability. Moreover, the solid sphere target has an advantage in more simple fabrication process, as compared with the shell target, especially for the cryogenic fuel fabrication. High density compression of the solid sphere attached a Au cone target, which could be hydro dynamically stable, had been experimentally demonstrated to be ρR~0.1 g/cm2[8]. Based on 2D simulation results, about 130kJ would be required to obtained ρRmax  =1.0 g cm−2 using a solid sphere and multi-step laser pulse [9]. More efficient coupling > 20% would be expected through the optimal heating processes to initiate ignition and burning of the compressed fuel with 50-100kJ heating laser energies [10].
High repetition laser system development and fusion energy reactor engineering
We are developing a 100J/100Hz high power lasers with an active mirror amplification scheme using 10 cm Yb:YAG ceramics pumped by laser diodes. Based on this system, we are now proposing a new type of high power laser system as shown Fig. 1 to explore a variety of new fields of sciences, which is called “J-EPoCH”. This facility integrates all the state-of-arts high power laser technologies, based on the 160 beams of 100Hz /100J laser module, providing high repetition 10kJ long pulse lasers, 5-20PW short pulse lasers and different kinds of laser plasma accelerators, and laser-driven radiation sources such as x-rays and neutrons. 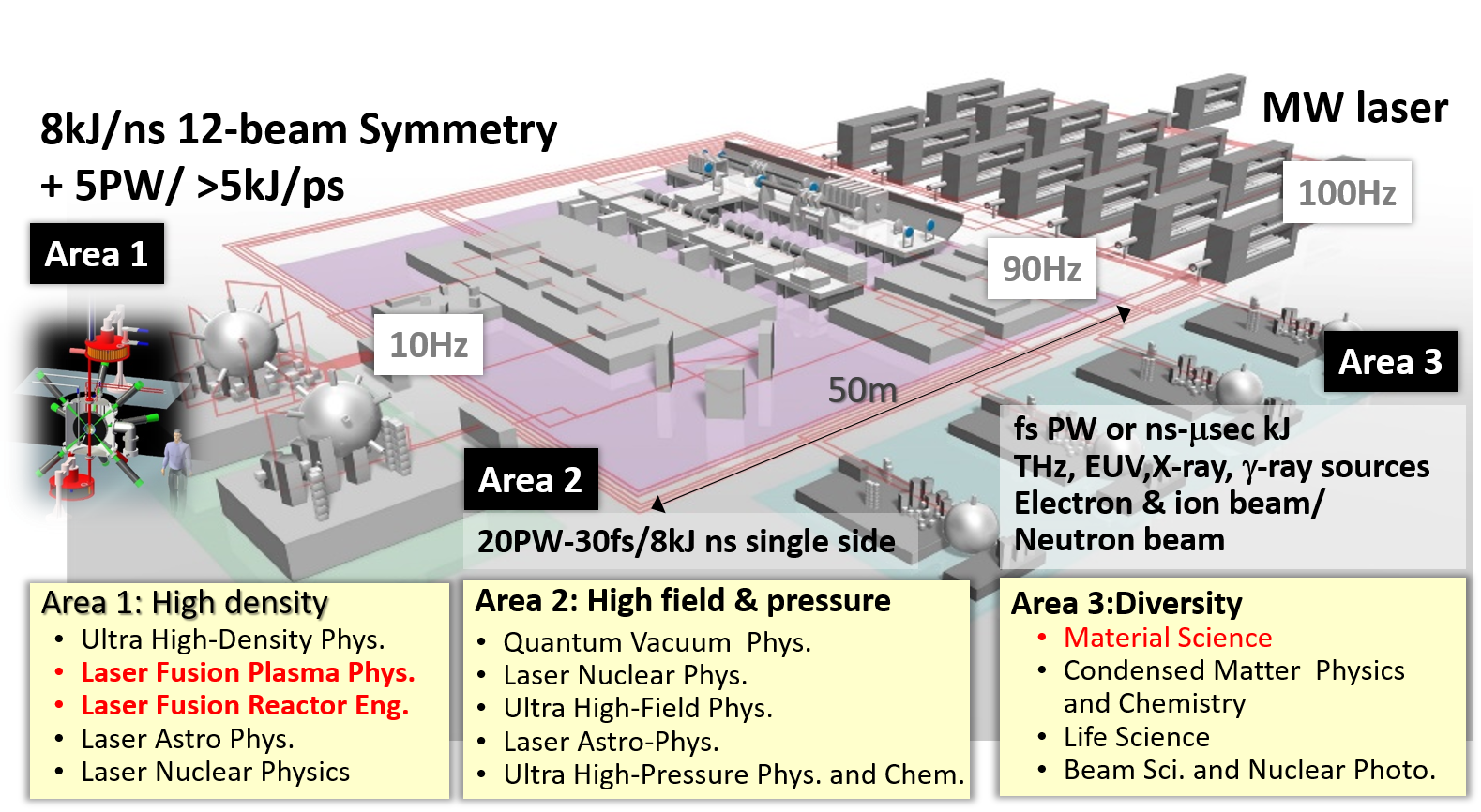