Using its unique flexibility and advanced plasma diagnostics, the TJ-II stellarator is contributing to the understanding and solution of critical challenges in fusion plasmas. Next, we highlight some of the most relevant recent results in the framework of its research programme.

Towards validation of gyrokinetic and neoclassical simulations. Aiming at the validation of the instability properties predicted by gyrokinetic (GK) simulations and of the electrostatic potential variations on the flux surface, φ1, calculated by neoclassical (NC) codes, dedicated experiments have been carried out in TJ-II for a systematic characterization of turbulence wavenumber spectra and perpendicular rotation velocity measured by Doppler Reflectometry (DR) at poloidally separated positions on the same flux surface [1]. Poloidal asymmetries in the intensity of the wave number spectrum that depend on plasma conditions have been characterized and compared with global linear GK simulations by the code EUTERPE. Model and experiment qualitatively agree in the radial dependence of the turbulence intensity, in the turbulence dispersion relation and in showing a poloidal asymmetry that depends on the magnetic configuration. Recent experiments exploring configurations with different magnetic ripple have shown a reduction in the turbulence asymmetry at configurations with reduced ripple. Besides, the influence of base ion mass has been investigated in hydrogen and deuterium plasmas. The ion mass in TJ-II plasmas does not affect the properties of the turbulence, neither the amplitude nor the spectral shape or the poloidal asymmetry. The lack of dependence of the turbulence spectrum on the ion mass is also found in GK simulations. Model validation will also benefit from the effort of verification of GK simulations in different computational domains [2] as well as from the application of the recently developed GK code stella to multispecies turbulent transport calculations in TJ-II [3].

Poloidal asymmetries in radial electric field, Er, are found that depend on the plasma collisionality. These results have been compared with the contribution to Er arising from −φ'1 as calculated with the NC version of the code EUTERPE. These results show variations in Er comparable in size to those found in the experiments, but there is a disagreement regarding the sign of the Er correction. Recent simulations performed with the newly developed NC code KNOSOS [4] show that the effect of kinetic electrons on φ1 has to be taken into account due to the strong Te dependence of the electron contribution to φ1 when the electrons are in the 1/ν regime [Fig. 1]. KNOSOS (KiNetic Orbit-averaging SOlver for Stellarators) is a freely available, open-source code that calculates neoclassical transport in low-collisionality plasmas of three-dimensional magnetic confinement devices by solving the radially local drift-kinetic and quasineutrality equations. 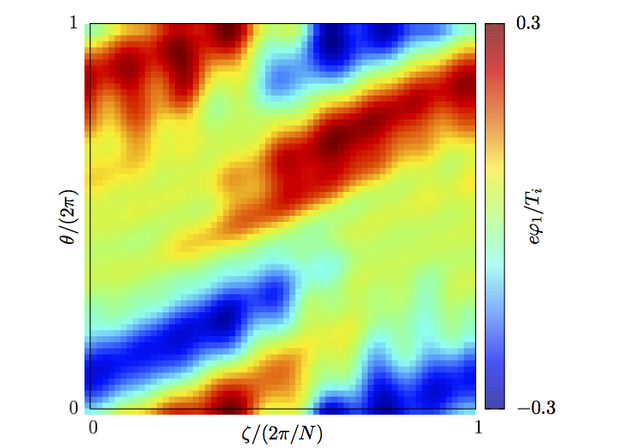 Experiments in TJ-II with cryogenic and TESPEL pellets show that post-injection particle radial redistributions can be understood qualitatively from neoclassical predictions while also providing a means to benchmark the HPI2 code [5]. TJ-II measurements provide 2-D maps of plasma potential and fluctuations to address the question of how hollow density profiles, created by pellets, affect turbulent transport. Fluctuations are stronger in the negative density gradient than in the positive one in consistency with TEM linear simulations [6].

Towards the validation of fast ion induced stabilization and the identification of Alfvén Eigenmode actuators. An ambitious research programme is in progress to investigate the relation between zonal structures and Alfvén eigenmodes (AE) and its role on the nonlinear dynamics of AEs and transport as well as to develop and demonstrate AE control strategies using ECRH and ECCD in TJ-II. The unique TJ-II experimental set-up using a dual HIBP has shown that, in some conditions, long range correlations (LRC) are detected both at the AE frequencies and low frequencies (<10 kHz) [Fig. 2]. LRC are observed in plasma potential fluctuations but not in density fluctuations as expected in zonal flow structures [Fig. 2]. It is an open question whether those zonal structures are directly driven by fast particle effects or/and are the consequence of plasma scenarios with reduced damping of zonal flows. Experiments in TJ-II have demonstrated the effectiveness of ECRH and ECCD actuators to modify AE activity [7]. 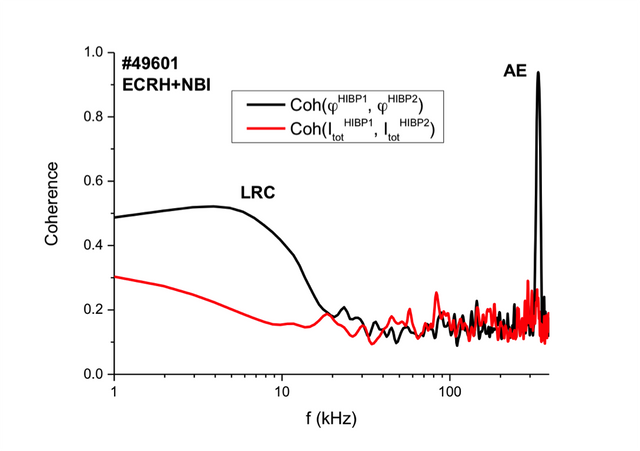 Towards the characterization of the interaction between neoclassical and turbulent transport mechanisms. We have investigated the impact of Er on turbulence propagation and the coupling between the plasma edge and the scrape-off layer (SOL) during electron–ion root transitions where Er is changed in a controlled manner from positive to negative values. It is shown that Er does not only affects the radial turbulence correlation length but it is also capable of reducing the propagation of turbulence from the edge into the SOL. This result was obtained using a technique based on the transfer entropy, which quantifies the propagation of information [8]. These observations are highly relevant for the understanding of the mechanisms that determine the SOL width.

The interplay between of NC radial electric fields, Reynolds stress gradients and LRC has been investigated in different plasma scenarios in TJ-II. Turbulent driven acceleration alone cannot explain the dynamics of zonal flows whose radial width is affected by the isotope mass [9]. These results are in line with the expectation that the interplay between turbulent and neoclassical mechanisms is an important ingredient of the dynamics of edge zonal flows.

Power exhaust physics: liquid metals. Solid and liquid samples of Li/LiSn/Sn, in a Capillary Porous System (CPS) arrangement, have been exposed to the edge plasma [10]. A simple 1D model was applied to the data, allowing for the evaluation of the kinetic energy (Ek) of ejected atomic species while their residence time at the edge was determined by monitoring the ratio of first ion/neutral emission light intensities. A clear evolution of Ek with sample temperature was deduced for Li atoms, this being associated to the different relative contributions of sputtered/evaporated atoms. SnI emission into the plasma has also been measured with radial and toroidal resolution. The deduced mean free paths for the ejected Sn atoms under sputtering conditions (low T) imply unrealistic high energies if the bibliographic data for the ionization rate constant of Sn are assumed. For the LiSn case, Li as well as Sn emissions were simultaneously detected and analysed. Plasmas under cut-off (collapsing) conditions were also investigated to check for the sensitivity of the recorder line intensities and ionization rates to the edge electron temperature.