The key role of plasmoid-mediated magnetic reconnection has been experimentally investigated during transient-coaxial helicity injection (T-CHI) for non-inductive plasma start-up on HIST. The fast magnetic reconnection is required for the flux closure in T-CHI discharges. Here, we have found that, (i) during the helicity injection phase, an current sheet is elongated and broken apart at some points inside it due to a tearing instability, so that a small-size plasmoid is newly born in sequence by being divided due to reconnection from a bigger plasmoid. The separation and coalescence of the multiple plasmoids are repeated through the reconnection. (ii) Doppler ion temperature has increased from 10-20 eV up to 80 eV during the T-CHI. The ion heating driven by the plasmoid reconnection has been for the first time identified on HIST.

For fusion reactors, non-inductive current drive methods, such as various helicity injection techniques and subsequent RF- or neutral-beam injection are required for steady-state operation. Transient-CHI (T-CHI) non-inductive plasma start-up method [A] could realize compact reactor designs based on the spherical tokamak (ST) without the central solenoid coil. This method needs the magnetic reconnection at the X point for generating a high quality closed flux during the plasma injection phase. The magnetic reconnection is well known to heats effectively ions by converting from magnetic energy to kinetic energy. The application of reconnection heating can be expected for the T-CHI. At present, one of the most important issues in the T-CHI is whether it can establish enough closed flux surfaces and plasma heating by driving the magnetic reconnection as fast as possible.

According the recent MHD numerical simulation on T-CHI [B], the reconnection rate based on the plasmoid instability is much faster than that by Sweet-Parker (S-P) model even in the high Lundquist number S regime. Understanding mechanism of the fast plasmoid reconnection for the flux closure and the related ion heating is the primary objective of the T-CHI experiment on the Helicity Injected Spherical Torus (HIST) device [C].

Figure 1 shows the time evolution of the toroidal plasma current, the electron density, the poloidal flux (at Z=0.37 m), the reconnection electric field calculated by $E_t=-(d\Psi_p /dt)/2\pi R $ at X-point (at R=0.25 m, Z=0.318 m). The plasma is injected from the coaxial magnetized plasma gun (MCPG) into the flux conserver (FC) and decays due to a plasma resistivity. The regular oscillations with the frequency of ~175 kHz can be seen in $n_e$,$\Psi_p$,and $E_t$ signals between $t$=170 and 220 $\mu$s. The ion Doppler temperature increases to 30-40 eV between $t$=150 and 170 $\mu$s, proceeding up to 80 eV. These oscillations indicate that small-size plasmoids are repeatedly generated in the elongated current sheet by the reconnection.

Figure 2 shows 2D contour plots of $\Psi_p$ and toroidal current density $J_t$ (a), and $E_t$ (b) that are calculated from data obtained by the internal magnetic field measurements. The $J_t$ and $E_t$ are in the direction on the R-$\Theta$-Z cylindrical coordinate system.

It notes that the current sheet is elongated by the pull $J$x$B$ force from the MCPG and there are three small-size plasmoids inside it. Results from the $E_t$ contours exhibit that its polarity changes at the reconnection points during one cycle of the plasmoid oscillation in the elongated current sheet.

Figure 3 shows the detailed formation process of a new plasmoid from a mother plasmoid with a large amount of flux. The current sheet $J_t$ is increased and elongated from $t$=160 $\mu$s and broken up due to a tearing instability, so that a plasmoid has been born from the flux-amplified plasmoid on the left due to reconnection between $t$=170 and 172 $\mu$s. After that, the newly born plasmoid is moving away from the X-point at $t$=174 $\mu$s and approaching back to the mother plasmoid at $t$=178 $\mu$s. This cyclic plasmoid behavior is a fine picture of the observed oscillations accompanied by magnetic reconnection events. The magnetic oscillation of $B_z$ measured on the mid-plane propagates radially from the X-point (at R= 0.35 m) with $V_r$=29 km/s which is found to agree with the Alfven speed. The propagation of $B_z$ is caused by the reconnection out-flow.

In summary, the experimental investigation has revealed the process of plasmoid-driven magnetic reconnection during transient-CHI on HIST. The experimental findings are as follows; (1) the separation and coalescence process of plasmoids is repeated after the elongated current-sheet becomes unstable during the CHI current start-up. (2) the ion heating is enhanced due to the repetitive reconnection during the plasmoid oscillation. 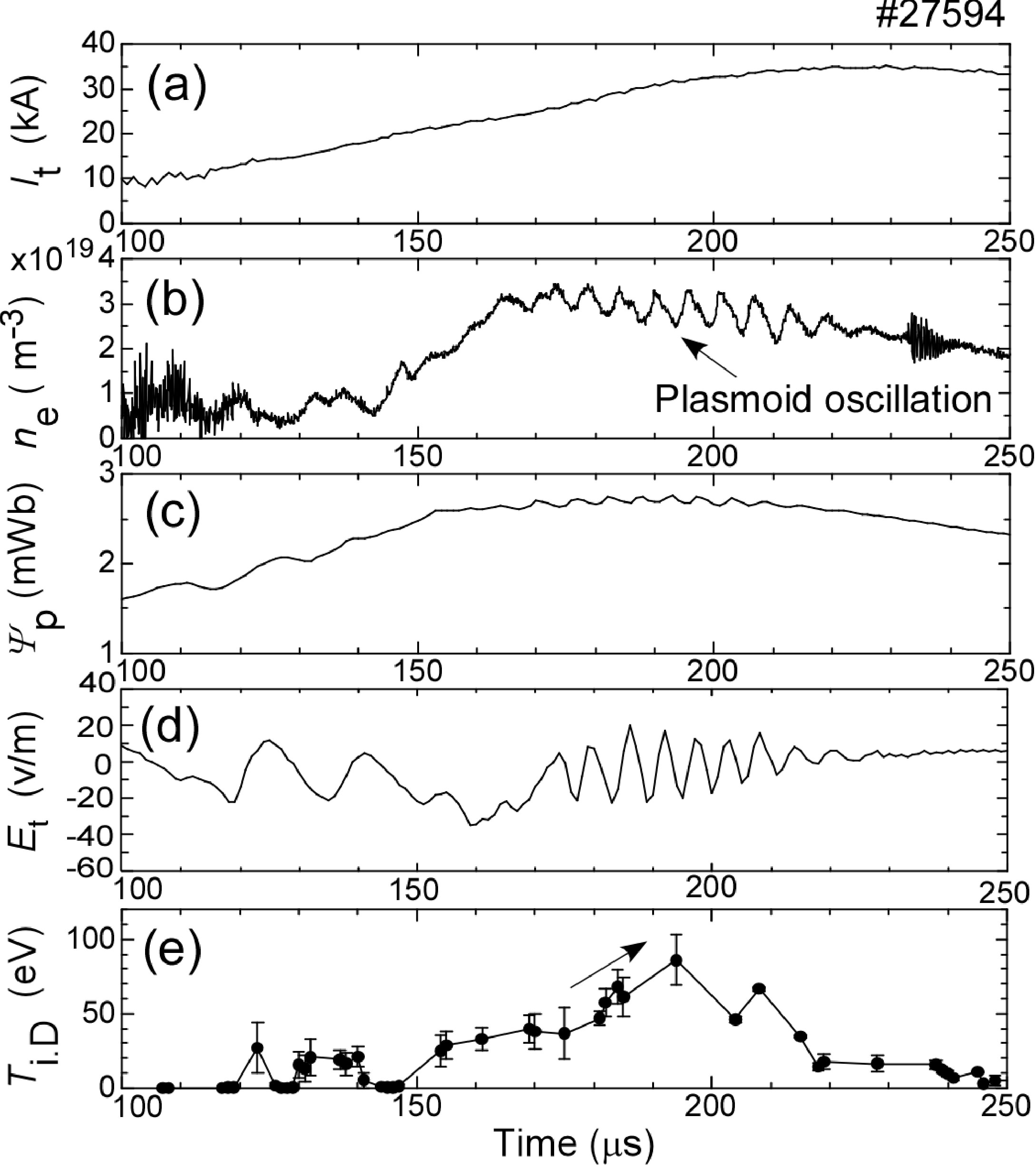 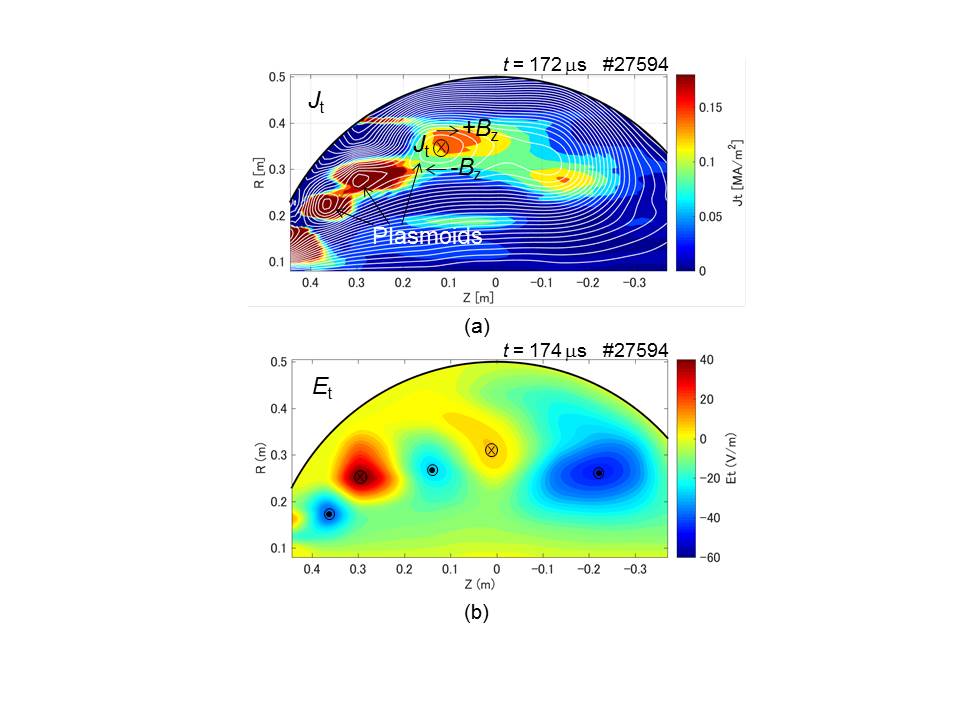