The new findings for dynamic process of inward diffusion in the magnetospheric plasma are reported on the RT-1 experiment: (i) The evolution of local density profile in the self-organized process has been analyzed by the newly developed tomographic reconstruction applying a deep learning method $[1]$ . (ii) The impact of gas injection excites low frequency density fluctuation, which continues until the peaked density profile recovers. The fluctuation has magnetic components (suggesting the high-beta effect) which have two different frequencies and propagation directions. The phase velocities are of the order of magnetization drifts and increase in proportion to the plasma pressure. The self-regulating mechanism of density profile works most apparently in the naturally made confinement system, magnetosphere, which teaches the basic physics of long-lived structures underling every stationary confinement scheme.

The spontaneous confinement of high-beta plasma in the magnetospheric configuration results from the inward (or uphill) diffusion driven by “low-frequency” fluctuation; the relevant frequency must be in the ion drift frequency range so that the constancy of the angular momentum is broken, while the actions of the bounce and gyro motions are conserved. The topological constraints due to these adiabatic invariants explain the inward diffusion $[2]$ . The Ring Trap 1 (RT-1) device confines a high-beta plasma (local electron beta $\sim$ 1) in a dipole magnetic field generated by a levitated superconducting magnet. The density has a strongly peaked profile that is explained as the homogenization of particle number among different magnetic flux tubes. In the high-density regime of RT-1, interferometers and a reflectometer detect edge localized fluctuations in the electron density in the frequency range less than 1 kHz. The fluctuation level increases obviously near the cut-off density, suggesting the density dependence of the fluctuations. 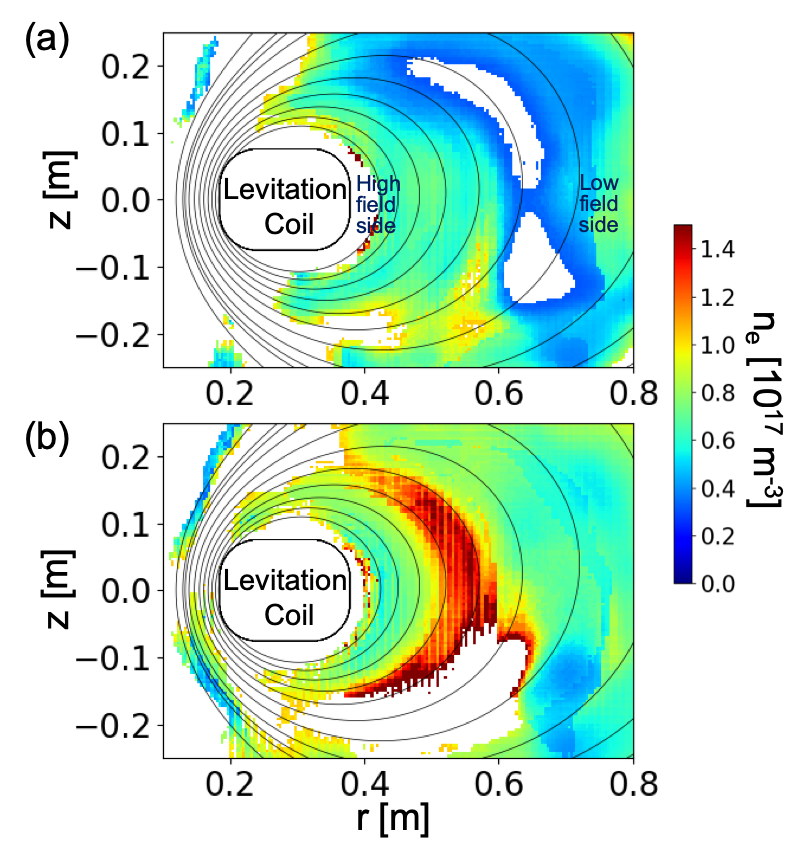 Simultaneous excitation of low-frequency fluctuations during the inward diffusion are observed in electrostatic potential, density, and magnetic field ($\mathrm{B_{||}}$ direction) measured by a floating potential probe, interferometers, and magnetic probes, respectively. Figure 2 (a) shows the time evolution of phase difference for each frequency between two magnetic probes toroidally separated by $\Delta \varphi$ = 45 degrees. A neutral gas is injected at $t =1.1$ sec and the inward diffusion occurs until $t =1.8$ sec. The fluctuations of two frequency component ($\sim$ 1 kHz and $\sim$ 0.7 kHz) are observed. The typical phase velocities for the low-frequency fluctuation in toroidal and z-direction are 30 km/s ($k_\perp$= 0.003 $\mathrm{cm^{-1}}$, $k_\perp \rho_i \sim$ 0.02) and 2 km/s ($k_{||}$ = 0.03 $\mathrm{cm^{-1}}$, $k_{||}\rho_i \sim$ 0.2), respectively. Here, the $k_\perp$ and $k_{||}$ are wave number in the perpendicular and parallel direction to the magnetic field, respectively, and the $\rho_i$ is ion gyroradius. The phase velocity of the fluctuation during the inward diffusion is of the order of diamagnetic drift velocity of $10^4$ m/s and it increases from 20 km/s to 40 km/s as the increase of electron beta ($\beta_e$) (Fig. 2 (b)). The phase velocity in the z-direction also increases from 1.5 km/s to 2.5 km/s as the increase of $\beta_e$ (Fig. 2 (c)). During the inward diffusion from $t = 1.1$ sec to $t = 1.8$ sec, the fluctuation of $\sim$ 1 kHz propagates toroidally in the electron diamagnetic direction. After the inward diffusion, on the other hand, the fluctuation of $\sim$ 1 kHz disappeared and the fluctuation of $\sim$ 0.7 kHz which propagates in the ion diamagnetic direction is gradually excited. The propagation direction depends on the density profiles, suggests that the drift wave instability is a possible candidate for the low-frequency fluctuation. 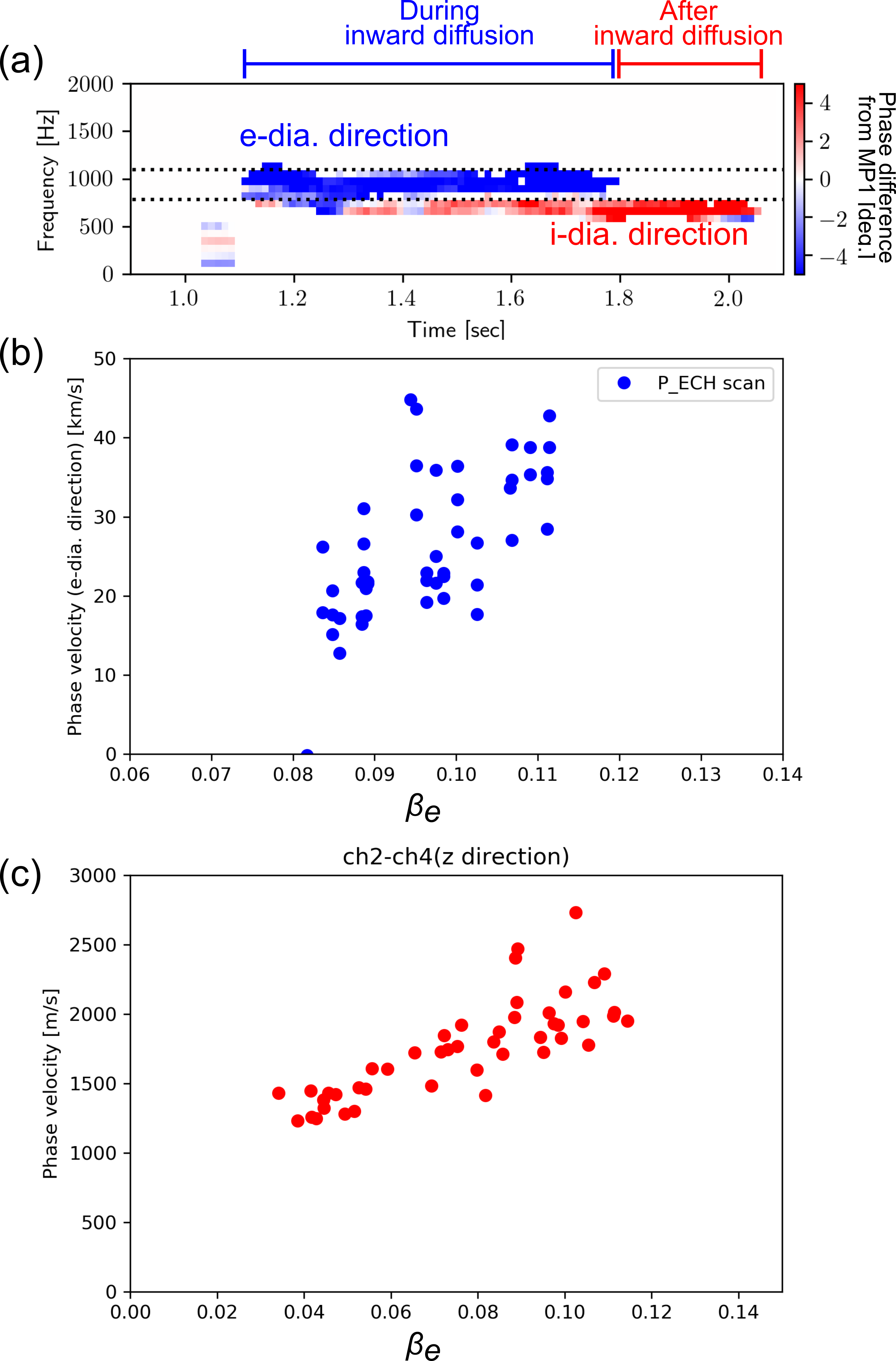 The results are summarized as follows: (i) The self-organized peak density profile after the inward diffusion has been visualized by the tomography with deep learning technique. (ii) The existence of low frequency fluctuation which drives inward diffusion has been experimentally proved and its physical characteristics have been revealed. These results advance our understanding of transport and self-organization not only in dipole plasmas, but also in general magnetic confinement systems relevant to fusion plasmas.