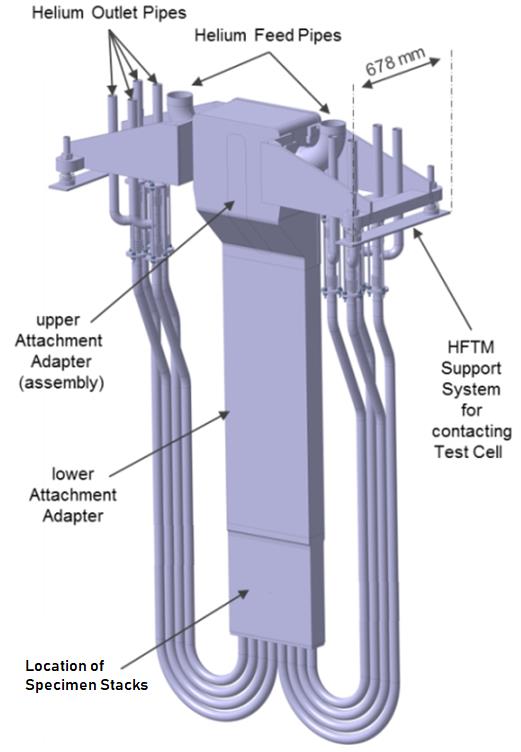 In this work tritium production and activation characteristics expected after 1 year of operation were estimated for IFMIF-DONES high flux test module. It was assumed that during this time period device will be operating incessantly for 345 days at full power. Remaining 20 days will serve as maintenance period. Neutron spectrum for HFTM was obtained with MCNP5 [2.] particle transport code with McDeLicious extension utilizing JEFF 3.1.2 [3.] nuclear data library. Activation calculations were performed with FISPACT-2 [4.] inventory and source-term code with JEFF 3.3 [3.] nuclear data library.
HFTM model [5.] includes container structure and specimen stacks with sample capsules. Container structure consists of attachment adapter and helium feed pipes, lower attachment adapter, support trusses, upper attachment adapter. All container structure parts are made of 316L(N) stainless steel. As for specimen stacks, it consists of closer, grid, sleeve and top reflector. All these parts are made from EUROFER steel. There is also natural sodium filling for heat conduction. Dummy specimens are made from EUROFER (75%) and sodium (25%) composite. Specimen envelope is made from EUROFER, AISI 321, MgO, NiCr 80/20, and INNOBRAZE ML 442 alloy with respective percentage shares of 73.26, 10.76, 8.04, 2.3 and 5.64 %. 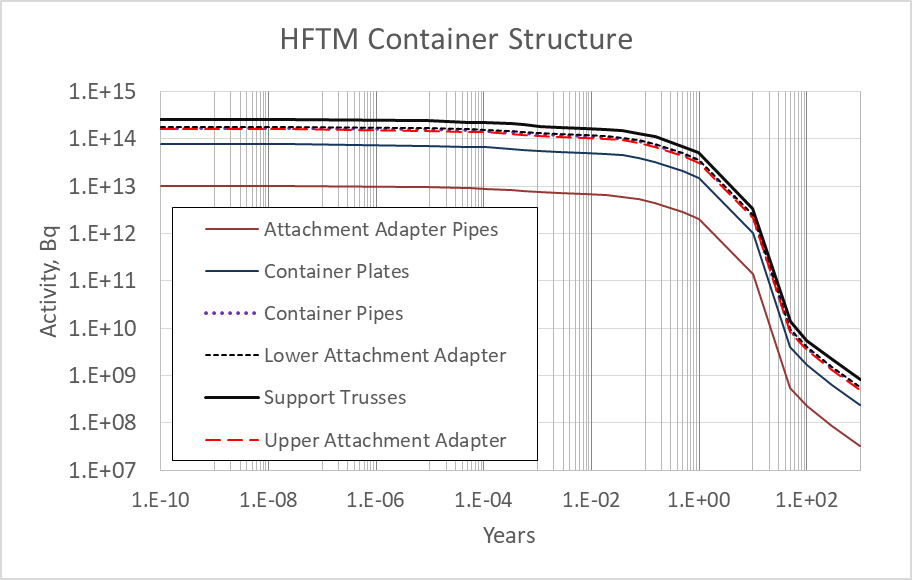 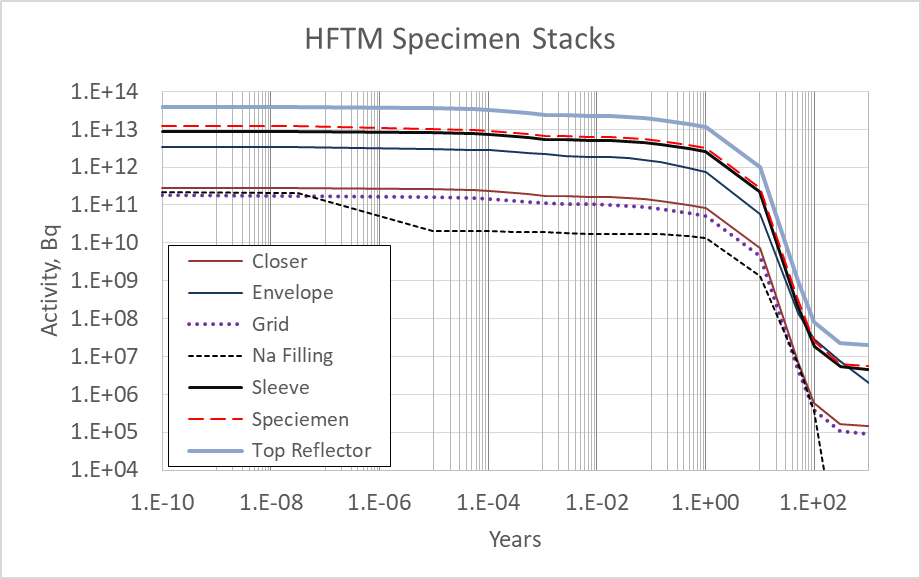 In HFTM, atoms of sodium are up to ~50% more likely to be displaced compared to structural steels with annual DPA equal to ~10. Sodium also exhibits highest specific decay heat, activity and contact dose rates, while among investigated steels most active material after the end of irradiation is 316L(N) type stainless steel. In most cases heat is mainly produced by gamma radiation (from 60 % to 95%) with remaining fraction belonging to beta particles. This is valid for shutdown period up to 10 years as later on beta particles from tritium decay are the main contributors to the decay heat. There is also exception for sodium where beta particles from F 20 decay process constitute up to 62% of total decay heat within first few seconds at the end of irradiation.
Tritium inside the HFTM is being produced in all investigated materials in relatively low amounts (up to 1E-07 appm/sec). At the end of the irradiation tritium contributes up to ~0.05% to the total value of activity with a tendency for fraction to increase with longer shutdown periods. In sodium, tritium is mainly produced from Na 23 (n,t) reaction, while in investigated steels, Fe 56 (n,Xt) reactions are most common. The highest total activity and tritium inventory in container structure (figure 2) belongs to support trusses followed by lower attachment adapter and container pipes. As for specimen stack (figure 3), the highest total activity and tritium inventory belongs to top reflector. After one year of operation ~1 mg of tritium is being produced in whole HFTM structure.