To develop innovative materials, components and basic technologies of thermonuclear fusion demonstration plants (DEMO) and hybrid fusion fission systems, sources of D-T fusion neutrons with an energy of 14.1 MeV with an intensity of up to 1019 n/s are needed 1. The design of such an experimental hybrid thermonuclear source (DEMO-FNS) is currently being carried out at the Kurchatov Institute 2.
NRU Moscow Power Engineering Institute and NRC Kurchatov Institute 3 use modern experimental stands and installations to test thermonuclear materials under plasma beam and neutron loads, and to study heat transfer and hydrodynamics in components of thermonuclear reactor cooling systems at extremely high megawatt-scale thermal loads. A comprehensive program of experimental and computational-theoretical research is planned.
Most of these tests and studies are performed for the first time in the world and is aimed at the solution of acute critical questions [4] of resistance of materials and components for thermonuclear reactor in support of Russia's participation in the international tokamak-reactor ITER and the construction of domestic reactors, fusion neutron source, and DEMO.
One of the key unsolved problems in the design of fusion plants is the problem of the first wall. The initial stage of designing the first wall includes the task of selecting suitable materials and determining the doses of their neutron irradiation. An important circumstance is the possibility to use materials produced by industry for an experimental hybrid thermonuclear neutron source. This is facilitated by reducing the requirements for the neutron load on materials to 0.2 MW/m2 and radiation doses to 2 MW×years/m2 2.
A distinctive feature of the DEMO-FNS is the combination of thermonuclear plasma neutrons and hybrid blanket fission neutrons in the energy spectrum formed in the installation materials. This spectrum is more harmful than the energy spectrum of fast neutron reactors. To implement the DEMO-FNS project, it is important to assess the effect of this neutron spectrum on radiation-induced damage to the installation materials, primarily the materials of the first wall, which is the most problematic node of the installation. The study can only be performed using a computer simulation of the experiment due to the lack of real hybrid fusion plants.
Computer modeling was performed using the Monte Carlo method. The MCNP-4 [5] program was used with cross sections from FENDL-2 [6] and ENDF/B-6 [7] files.
An improved three-dimensional full-scale model of the DEMO-FNS reactor developed for solving neutron-physical problems was used for calculations (Fig. 1 and 2).
In this paper, the energy spectrum of neutron radiation was determined in the first wall of the DEMO-FNS installation with a blanket for transmutation of minor actinides at the power of a thermonuclear D-T neutron source equal to 40 MW. The DEMO-FNS spectrum was compared with the energy spectrum of the fission reactor. The obtained spectrum was used to estimate the dose of radiation damage in the first wall materials, including tungsten, beryllium, Cu-Cr-Zr bronze, and steel (Fig. 3), as well as the rate of transmutation reactions under the action of neutrons, leading to the accumulation of solid and gas impurities. The obtained results are compared with similar results for other thermonuclear plants and fast neutron reactors.
It was found that the dose of radiation damage in the materials of the DEMO-FNS can be 1.5 times higher than the dose in fast neutron reactors at a fluence of 1022 n/m2.
The work is supported by the RFBR grant 19-29-02020 "Properties of materials under extreme thermal, plasma-beam and neutron loads to support the development of new structural components for hybrid fusion reactors". 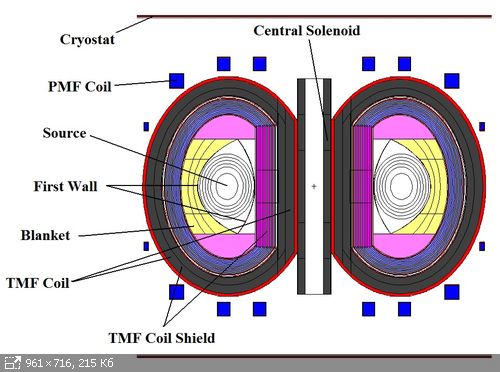 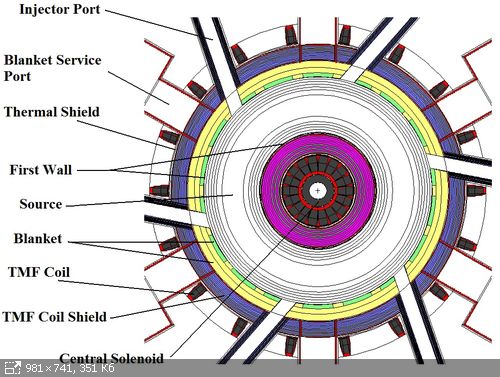 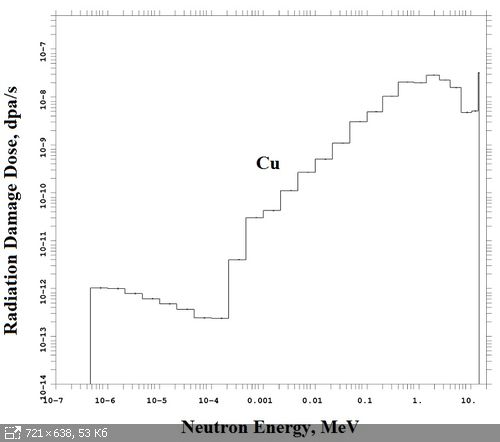