Introduction
India is one of the participating countries of International Thermonuclear Experimental Reactor program, where various Test Blanket Modules along with the Test Module systems are being tested for their performance. 6Li enriched Lithium Titanate is found to be one of the most promising candidates for solid test blanket module material for fusion reactors. In this context synthesis of various ceramic breeder materials such as Li2TiO3, LiAlO2 are being carried out and characterized [1,2]. Accurate and Precise information on the 6Li/7Li isotope ratio of Lithium is required at various stages of the nuclear fusion fuel cycle such as: i) Quantifying the Tritium produced in the blanket material before and after irradiation ii) provide inputs for validation of various computer codes used for calculating the Tritium generated [3] and iii) for optimization of experimental parameters to achieve required enrichment [4].
Our Laboratory has a vast experience in determining isotopic composition of various elements in geological and nuclear materials by Thermal Ionisation Mass Spectrometry (TIMS). Recently we developed a simple method for analysis of lithium in ceramic compounds such as LiAlO2, Li2TiO3, which involved direct fusion of the ceramic powder with sodium borate flux on the rhenium loading filament to form heavier molecular ions NaLiBO2+ (m/z 71,72,73) and Na2BO2+ (m/z 88,89) to give very precise values for 6Li/7Li ratios [5]. The method did not require sample dissolution or purification procedures to be carried out and also the contribution of boron due to fractionation or contamination could be accounted by simultaneously measuring 10B/11B isotopic ratio using Na2BO2+. In the present studies total evaporation method (TE) was used where the molecular species of the ions NaLiBO2+ and Na2BO2+ were collected in the faraday cups till the sample was completely consumed. This procedure enhanced the merits of the molecular ion method to give accurate and precise values for 6Li/7Li with much smaller sample size requirements.

Experimental
In the conventional or normal method of ion collection, the sample solution is loaded and dried on the filament. This is heated in the ion source to obtain steady ion current of the atomic or molecular ions of the element which is collected in the faraday cups for a limited duration. Even though this method of ion collection gives precise isotopic ratios which may not be accurate due to ion source fractionation as a result of faster evaporation of the lighter isotope, causing the isotopic ratio to change continuously during the course of analysis. This phenomena effects the lighter elements more than the heavier ones. As a result 6Li/7Li isotope ratio when analyzed as atomic ions (Li+) results in highly fractionated values. A 10% variation of isotopic composition of lithium has been observed with the change in loaded amount, ion source loading material and time of analysis. Methods using Li3PO4 as the loading material after complete conversion of the purified lithium to its phosphate compound has shown high precision provided stringent analysis conditions are followed [6].
We had initially developed the Li2BO2+ method for analysis of lithium at m/z 54 to 57 which shows lower fractionation due to the higher molecular mass of the evaporating species. The 56I/57I ion intensity ratio is monitored to obtain 6Li/7Li isotopic ratio which has to be corrected for contribution from boron isotopes. This requires boric acid having known isotopic composition such as NIST 951 isotopic standard. Any change in the 10B/11B ratio due to contamination or analysis conditions remains unaccounted which could result in biased 6Li/7Li ratios.
Presently analysis of lithium is being carried out at our laboratory, using NaLiBO2+ as a monitoring ion on TIMS model TRITON-PLUS. The instrument is equipped with nine faraday cup detectors for simultaneous collection of the ions and also has a software for carrying out Total Evaporation and ion integration (TE) of the ions generated in the ion source of TIMS. The conventional mode of data acquisition that was earlier used, involved ion acquisition for 3 blocks of 36 scan, each scan being integrated for 4.2 Seconds. The 6Li/7Li ratio was determined using the formula

The method gave very precise values for 6Li/7Li ratios for several samples of LiAlO2 and Li2TiO3, proposed breeder materials for the Indian TBM’s. Repeated analysis of isotopic standard L-SVEC lithium gave a precision of better than 0.1% for 2µg sample size [6].
In the present studies, total evaporation method (TE) was used where the molecular species of the ions NaLiBO2+ and Na2BO2+ were collected in the faraday cups till the sample was completely consumed to give accurate values for 6Li/7Li using the above formula. Ion collection was carried out from filament current of 1.11A at which the signal appeared and the ion intensity continued to increase at a filament heating rate of 1 mA/cycle till the sample was completely exhausted. The methodology employed for various lithium compounds over varying abundances of 6Li gave a correction factor K = (6Li/7Li) conventional/ (6Li/7Li) TE= 1.01±0.0008 (1σ) between conventional and total evaporation (TE) methods as shown in Figure 1. An accuracy and precision of better than 0.1% was achieved for various lithium matrices such as LiAlO2, Li2TiO3 and L-SVEC Li2CO3 for a sample size of 500ng as seen in Figure 2.

Due to the high precision of the total evaporation and ion integration method developed for the measurement of 6Li/7Li using NaLiBO2+ as monitoring ion, different lithium compounds of natural composition with minor differences in their isotopic ratios can be identified. 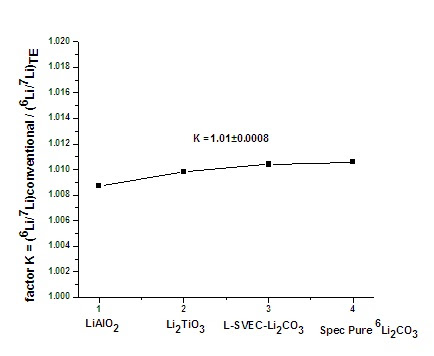 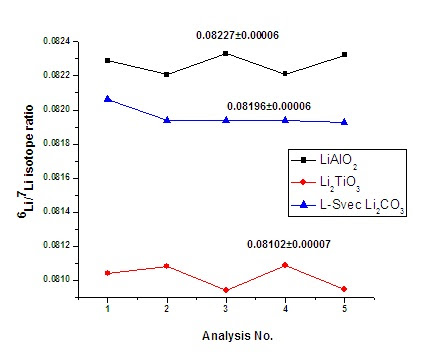