The realization of advanced fusion reactors rests with improvement of plasma facing materials for divertors. Thermal stability of the strength of tungsten (W) is one of the critical issues for the improvement. This paper reports development of Dispersion-Strengthened W (DS-W) alloyed with Ti using a new process which is based on a combination of Mechanical Alloying (MA) and Hot Isostatic Pressing (HIP). New W-Ti alloys dispersed with TiO2 were obtained, and the thermal aging test showed high strength and thermal stability of the alloys, which were enhanced when larger MA balls were used.
Tungsten (W) alloys are candidates for plasma facing materials (PFM) of divertor components in terms of high thermal conductivity, high melting point and low tritium retention, etc. In the design of a Helical Fusion Reactor, FFHR-d1, the PFM of W will be used to withstand the heat loading of 20MW/m2 1. However, W has critical issues for the application such as recrystallization-embrittlement at high temperature. In previous studies of Dispersion-Strengthened (DS)-W, W-1.1wt%TiC alloys were investigated 2. However, this process has some critical issues such as its complexity and the limited volume of the products. Therefore, we have adopted a new fabrication process based on Mechanical Alloying (MA) - Hot Isostatic Pressing (HIP) methods [3], which have been applied to ODS ferritic steels, for the production of DS-W alloys. In this study the effects of Ti addition is investigated for potential dispersion strengthening with Ti-bearing particles. As a research for the fabrication parameters, the size effect of the milling balls was also examined.
In the production of DS-W-Ti alloys, the initial elements of W and TiC were mixed and mechanically alloyed in a planetary-type ball mill using tungsten carbide balls of 1.6 mm and 3.0 mm in a 250 cc MA pot with ball-powder ratio of 2:1. The alloying was carried out with a rotating rate of 360 rpm for 64 hrs in a pure argon gas atmosphere. The mechanically alloyed powders were compressed by cold isostatic pressing (CIP), and were then pre-sintered in hydrogen gas atmosphere at high temperature. The pre-sintered DS-W-Ti alloys were then sintered by HIP at 1750℃ for 1.5 hr with a pressure of 186 MPa. The DS-W-Ti alloys were characterized by chemical analysis, tensile tests, XRD (X-Ray Diffractometry), TEM (Transmission Electron Microscopy) and EDS (Energy Dispersive X-ray Spectroscopy).
Fine powders were produced by MA with 3.0 mm balls, whose XRD spectra, exhibited broadening and shift of the peaks, implying sufficient alloying took place. However, the refinement of the powders, XRD peak broadening and shift were limited in the case with 1.6 mm MA balls. In the case of 3.0 mm MA balls, the XRD exhibited the peak of TiO2 as shown in Figure 1. TEM and EDS after the HIP treatment showed that fine particles were formed in tungsten matrix, which are identified to be TiO2, in contract to the previous study in which TiC particles were formed 2. It was expected that TiO2, which has lower formation energy than TiC, precipitated preferentially at the MA stage. The alloys produced with 3.0 mm MA balls showed better mechanical properties (hardness and bending strength) than those of the alloys produced with 1.6 mm balls as shown in Figure 2. It is expected that the enhanced alloying and the subsequent formation of TiO2 dispersed particles resulted in the improved mechanical properties. 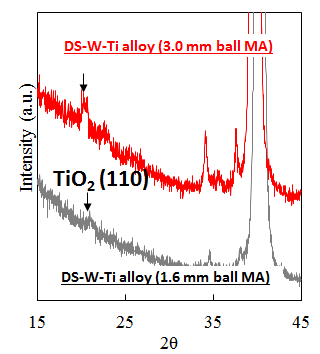 For investigation of the change of properties by the heat loading, the HIPed DS-W-Ti alloys were annealed at 1500-1900 ℃ for 1.5 hr in vacuum. The DS-W-Ti alloys obtained by using 1.6 mm MA balls exhibited coarsened grains and agglomerated dispersion particles. The coarsening of grain and the agglomeration of particles resulted in decrease of hardness as shown in Figure 2. On the other hands, the DS-W-Ti alloys obtained by using 3.0 mm MA balls were composed of micro-grains including dispersed particles, and did not exhibit significant grain coarsening and decrease in hardness after annealing. The results indicated effectiveness of 3.0 mm balls relative to 1.6 mm balls for the MA process. As a future work in this study, we are planning to improve further the W-Ti alloys through the control of dispersion particles by means of optimizing MA conditions, such as further increase in the ball diameter. 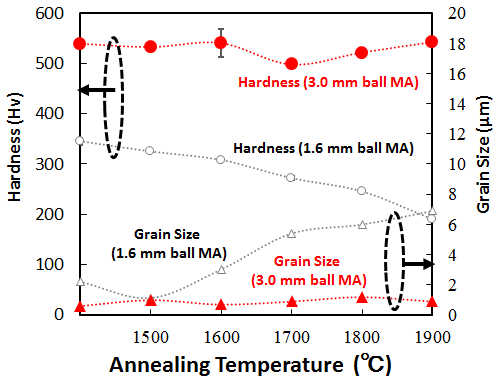