In support of establishing an integrated ITER scenario and also in preparation of the next DT JET-ILW campaign a series of experiments at different plasma currents and different auxiliary heating power levels are presently carried out at JET in which fuelling by gas puff and pellets are compared with respect to the energy confinement and impurity behaviour properties (1) . In previous experiments at very high input power (2) it has been observed that the energy confinement increases with pellet fuelling (or pacing) in comparison with gas puffing rendering pellet fuelling quite an attractive scenario for thermonuclear plasmas. This contribution is focused on the comparison of the two fuelling methods with respect to impurity radiation and impurity densities. A series of seven pulses (three with gas puff only, four with reduced gas puff + pellets) at $I_{p}$= 3 MA, $B_{t}$ = 2.85 T with average electron density $\langle n_{e}\rangle$ about $7\times 10^{19} m^{-3}$ and input power about 26 MW (22 MW NBI + 4 MW ICRF heating) is here considered. The stored energy, Wth, the confinement factor, H98, as well as Zeff are quite similar in the seven pulses, about 6.5 MJ, 0.88 and 1.4 respectively, while the radiated power (Ptotrad), and high-Z impurity concentrations can change significantly.
For the pulses with gas puff only, the increase in puffing rate from $4.9\times 10^{21}$ to $6.8\times 10^{21}$e/s leads to the decrease in $P_{tot}^{rad}$ from 10.3 MW to 7.6 MW, accompanied with the increase in the ratio of the radiated power in the divertor to the total one ($P_{DIV}^{rad}/P_{tot}^{rad}$ ) from 0.194 to 0.265 and in the ELM frequency, $f_{ELM}$, from 34 to 58 Hz. For the pellet pulses (fuelling or pacing) $P_{tot}^{rad}$ stays in the range 10.1 - 11.3 MW and $P_{DIV}^{rad}/P_{tot}^{rad}$ is lower than with gas puff only, in the range 0.162-0.181 with $f_{ELM}$ in the range 40 – 58 Hz, depending on pellet frequency and size (1).With respect to high-Z impurities VUV as well as SXR diagnostics show a definite difference between the two fuelling methods. For the gas puff only, the W concentration in the plasma core, cW, also decreases from $1.4 \times 10^{-4}$ to $1.0 \times 10^{-4}$4 with increasing the puffing rate while it stays at about $1.6 \times 10^{-4}$for pellet pulses. Similar behaviour is observed for Ni concentration. For this series of pulses there are no data for Be fluxes as well as concentrations, but judging from the similarity of $Z_{eff}$ in all the seven pulses one can assume that the concentrations are also similar. Indeed $Z_{eff}$ is mainly determined by Be in JET-ILW. Considering that in this series of seven pulses the input power and the stored energy are quite similar as well as the pedestal structure (1) the significant difference in $P_{tot}^{rad}$ , in $P_{DIV}^{rad}/P_{tot}^{rad}$ and in high-Z impurity concentration arises most likely from differences in the SOL transport since there is no evidence of increase in the level of impurity released by the wall and/or of longer impurity residence time with pellets,. Unfortunately, due to the magnetic configuration, for these pulses it was not possible a measure of the electron temperature and density as well as of some spectral lines near the OSP. However, for a pair of similar pulses at lower $I_{p}$ LPs indicate about a factor of two lower temperature and about a factor of two higher density for the pulse with gas puff only in comparison to pellets and spectroscopic data show that for the pellet pulses the fluxes both of Be and of W (see Fig.1) are not higher than those for the gas puff only while the core concentration of W is seen to be a factor 1.5 higher 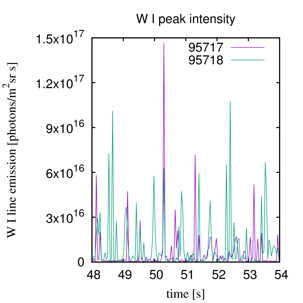 On the basis of these experimental facts and independently of differences in ELM frequency in the seven considered pulses, see ref. (1), which certainly contribute to differences in impurity transport and concentration, we have considered some basic transport mechanisms in the SOL by modelling the experimental pulses with the steady-state transport code COREDIV which couples self-consistently the 1D core with the 2D SOL and also impurities with the main plasma. Impurity diffusion coefficient in the core is set to be equal to that of the main ions and the anomalous impurity pinch, which is a code input, is set to zero. The SOL model is primarily based on Braginskii-like equations for the background plasma and on rate equations for each ionization state of each impurity species. In order to reconstruct numerically the experimental $P_{tot}^{rad}$, $P_{DIV}^{rad}/P_{tot}^{rad}$ and the W and Ni concentrations, the SOL density (input of the code) of the pellet pulses had to be set nearly a factor of two lower than that of the gas puff only pulses - while keeping the same <ne> - and the particle SOL diffusivity also lower, by about a factor of 1.5. This leads to a change in the balance between frictional drag and thermal forces in the SOL with related change in the impurity transport. Indeed, following ref. (3) the leading SOL parameter to avoid divertor leakage and core impurity accumulation is the ratio of the deuteron mean free path to the ion temperature gradient length, $\lambda_{D}/ \lambda_{T}$, which should be low, lower than the Mach number. A qualitative analysis of some preliminary COREDIV simulations for the here considered pulses shows that $\lambda_{D}/ \lambda_{T}$ for the pellet pulses is about a factor of three higher than for the gas puff only. Considering the computed little difference in the Mach numbers, this preliminary result suggests that the observed higher core high-Z impurity concentrations with pellet is at least partly due to the lower divertor impurity retention.
(1) Ch. Perez Von Thun et al. “ Pellet-gas comparisons with matched ELM frequency of pedestals, SOL, ELMs, impurities and core confinement in JET-ILW” This Conference (2) Kim H-T et al. Nucl. Fusion 58,036020 (2018) (3) Neuhauser, J. et al. Nucl. Fusion 24, 39 (1984) *See the author list in E. Joffrin et al., accepted for publication in Nuclear Fusion Special issue 2019, https://doi.org/10.1088/1741-4326/ab2276