Transport in magnetically confined devices is one of the key subjects in the area of fusion relevant plasma research. Both theoretical and experimental investigations have shown that the plasma confinement is largely controlled by drift wave fluctuations and associated anomalous transport across the magnetic field lines, among whom the toroidal electrostatic ion temperature gradient mode (ITG) or electromagnetic kinetic ballooning mode (KBM), trapped electron mode (TEM) and electron temperature gradient mode (ETG) are of great importance 1. Recent simulations have attracted a great interest in understanding the type of turbulence in Ohmic and L-mode edge plasmas. One possible candidate that can describe the transport level at the edge of L-modes is the resistive ballooning modes (RBMs) 2, or drift-resistive-inertial ballooning modes (DRIBMs) in which two fluid drift effects and electron inertia are included [3]. Although various approaches such as gyrokinetic and fluid models have been used to investigate the DRIBMs, the calculations of the modes have been treated as a separate fluid module of the simulation codes. Thus, it is imperative for the construction of an integrated transport model that is able to incorporate finite ion gyro radius effects at arbitrary order, in which the widely applied electromagnetic gyrofluid models [4], are proven to be a useful tool in understanding of plasma turbulence and the associated transport.
From this prospective, a local gyro-Landau fluid model is developed for the description of DRIBMs and toroidal drift wave modes in the collisional tokamak plasmas based on the two-fluid reduced Braginskii equations in a generalized ŝ-$\alpha$ geometry. The six-moment model for both ion and electron incorporates DRIBM, ITG, KBM and ETG, as well as kinetic effects including finite Larmor radius effect (FLR) and Landau damping. The eigenvalues are obtained by solving the linearized set of the model equations through standard numerical algorithm. Besides, particle transport driven by plasma instabilities at a given wavenumber k$\theta$$\rho$s can be estimated by ExB drift motion in the radial direction through the quasi-linear theory with growth rate and eigenvectors and as , where the superscripts r and i donates the real and imaginary parts of the perturbations, respectively. The detailed beta dependence of the linear stabilities of ITG, KBM and ETG has been achieved under the Cyclone base case parameters. It is clearly shown that for small values of $\beta$e=0 and 0.1%, the dominating instabilities are the mescal-scale ITGs and short-scale ETGs, while for large values of $\beta$e=0.7% and 0.8%, the transport is controlled by KBMs and ETGs with ITGs being fully suppressed. The plasma beta has little influence on the growth rate spectrum of ETG. It is also shown that the maximum growth rates of ITG and ETG are comparable under low $\beta$e cases, however, the maximum eigenvalues of KBMs are substantially larger than that of ETGs, suggesting that the core plasma is dominated by low k KBM turbulence, as shown in Fig. 1(a). All of these modes will lead to the outward transport. The contribution of ETGs are almost unaffected by βe, implying that the ETGs can persist and may play an important role in the high performance discharges, particularly in the future fusion reactors, as shown in Fig. 1(b). 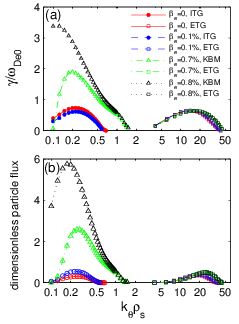 However, simulation results using JET-ILW edge-like parameters have indicated that the transport process at the edge is mixed by intermediate-scale (0.1<k$\theta$$\rho$s<1) DRIBM and ITG and short-scale (k$\theta$$\rho$s>5) ETG turbulence, which can be discovered in Fig. 2(a). Compared to the outward flux induced by ITG in the core plasma, the ITG and DRIBM produce the inward particle transport under L mode edge plasma conditions with the contribution of the latter much larger than the former. The ETG will induce the outward transport in the wavenumber region k$\theta$$\rho$s>5. The combination of these effects has strongly suggested that turbulent transport is predominated by DRIBMs in the collisional plasma edge, as shown in Fig. 2(b). The above findings are clearly beneficial for the understanding of the dominating instabilities and transport processes for various plasma conditions and different regions. 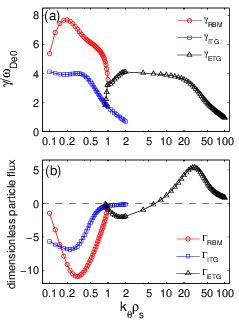