Summary: Aiming to approach a whole-device integrated simulation, this work reports a compact collisionless gyro-Landau-fluid(GLF) multi-mode multi-scale turbulence transport modeling, in which inherent multi-mode turbulence are consistently involved coupling with the evolution of plasma profiles. A massive parallel initial value code—extended fluid code (ExFC), is newly developed to finalize the closure of the modeling while the code is well-benchmarked versus gyrokinetic(GK) simulations. As applications of ExFC code, besides that the ion temperature profile stiffness phenomenon in heat flux-driven tokamak turbulence can be well-reproduced, two transport problems are solved and highlighted: (1) a 3D electrostatic potential structure with the same helicity as the embedded helical RMP is observed, especially enhanced in heat flux-driven turbulence. Results show that the 3D neoclassical electric field is subject to the constrain of neoclassical equilibrium force balance. (2) modeling simulations show that while the dynamic transition of ITG-TEM turbulence could be responsible for the characteristics of electron transport under the modulation of the inherent tearing mode magnetic island on HL-2A tokamak, it may also result in density flattening/peaking phenomena experimentally observed in the ECRH L-mode discharges.
Multi-mode multi-scale turbulence transport modeling in fusion plasmas is not only pursued to advance the integrated transport analyses, but also facilitates to efficiently simulate plasma transport response to highly complex nonlinear interaction, especially in the flux-driven turbulent plasmas. The former purpose is mainly to hoist the capacity of integrated modeling. Meanwhile, the latter one aims to understand the underlying transport mechanics mainly due to the turbulence. As the next step, a whole-device integrated simulation coupling the multi-mode multi-scale turbulence and neoclassical transport could be essentially necessary. However, the time-scales of the turbulence interaction as well as the core-edge energy confinement coupling are much shorter than the plasma transport time-scale. To realize the integration of whole-device physics with much separated spatio-temporal scale, high-fidelity GK simulation could be the first priority in use, but has been of great challenge in numerical scheme and also in CPU-time cost, especially for global simulation of the flux-driven turbulence transport. In sense, the fluid-type model exhibits rather more merits. Advanced fluid modeling including critical kinetic effects may be a favorable alternative.
In this work, a compact collisionless gyro-Landau fluid(GLF) turbulence transport modeling is presented, in which inherent MHD modes, the ion temperature gradient (ITG) mode, the trapped electron mode (TEM), the kinetic ballooning mode (KBM) and more others can be consistently involved coupling with the evolution of plasma profiles. Particularly, the novel collisionless model is established based on the adjustment of the phase shift between electrostatic potential and density response. The trapped electron dynamics here are treated by improving the so-called Weiland model. The compactness of the model is characterized by the lowest order moment equation system. Typically, a set of 5-field equations governing the nonlinear evolution of the density and temperature of the trapped electrons, vorticity, parallel velocity and temperature of ions are chosen to construct the electrostatic ITG-TEM model. It is extended to electromagnetic (EM) version by introducing the equation of the parallel magnetic vector potential for low beta plasmas. This set of 6-field EM equations build the theoretical framework of multi-mode multi-scale tokamak turbulence transport modeling. It may be flexibly extended to involve the isotope and impurity effects, even the energetic particle physics probably through employing a hybrid simulation approach.
The compact model above keeps several artificially adjustable numerical coefficients undetermined, which replace usual artificial viscous damping in conventional fluid model. To fix them, a massive parallel initial value code-extended fluid code (ExFC), is newly developed using 3D finite difference scheme. ExFC code consists of a suite of hierarchic versions from 3-field ITG with adiabatic electron response (ITG-AE), 5-field electrostatic ITG-TEM to 6-field EM ITG- TEM- KBM with MHD modes and more others. It is well-benchmarked versus GK simulations while optimizing the numerical coefficients, as illustrated in Fig.1, showing perfect agreement with GYRO and GS2 simulation results.
The model with ExFC code has been working in studies of tokamak transport. (1) The ion temperature profile stiffness phenomenon with core ion heating is well reproduced in the ITG-AE version of ExFC simulations. (2) A 3D electrostatic potential structure with the same helicity as embedded helical RMP island is observed, which is enhanced by core heating, and also poloidally rotates with a rotating RMP island. Results show that 3D neoclassical electric field is induced to satisfy the constrain of neoclassical equilibrium force balance. (3) The dynamic transition of ITG-TEM turbulence under the modulation of the inherent tearing mode magnetic island on HL-2A tokamak is simulated in the ITG-TEM version. The electron transport is analyzed around the MHD magnetic island. (4) A modeling global ITG-TEM simulation is performed to understand experimentally observed density flattening/peaking phenomena in the ECRH L-mode discharges. ExFC simulations show that the density flattening/peaking may result from dynamic transition among ITG, ITG&TEM, TEM even between electron temperature and density gradients driven TEMs, as illustrated in Fig.2.
Acknowledgements: This work was supported by National Natural Science Foundation of China under Contacts No. 11775069, U1967206, and by National Key R&D Program of China under Grant No. 2017YFE0301201. 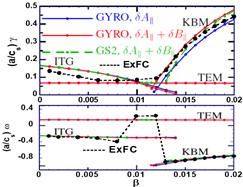 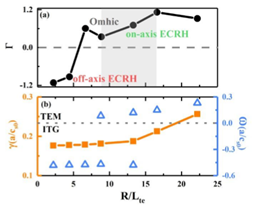