A novel quasilinear turbulent transport model DeKANIS has been constructed, which is suitable to investigate formation mechanisms of density and temperature profiles. DeKANIS predicts turbulent particle and heat fluxes in a quasilinear limit, considering the diagonal (diffusion) and off-diagonal (pinch) transport mechanisms individually. The predictions are performed quickly with machine-learning techniques. In addition to the separation of the transport mechanisms and the calculation speed, DeKANIS can apply a semi-empirical saturation rule and a theory-based one to determine fluctuation amplitudes. While the former one is capable of accurate predictions in a known plasma parameter range, the latter one enables us to extend the applicable range. These advantages enable us to predict density and temperature profiles of high-performance fusion plasmas as in JT-60SA.

Understanding and predicting particle and heat transport are important to obtain high-performance fusion plasmas. Since transport phenomena are dominated by turbulence especially for tokamak plasmas, detailed descriptions of underlying turbulence physics are required to predict density and temperature profiles accurately. Using theory-based turbulent transport models, such as TGLF, shows reasonable agreement with experiments. However, the existing models are hard to use to investigate the relationship between profile formation and transport processes because they do not tell us details of the calculated particle and heat fluxes. Furthermore, introducing the detailed descriptions of turbulence physics to the transport models tends to increase the computational cost. To resolve the issues, we have developed the turbulent transport model DeKANIS, which takes account of several transport processes individually and employs machine-learning techniques for the speed-up.

DeKANIS has originally been developed for particle transport$^1$, but the present one covers heat transport as well, predicting turbulent particle and heat fluxes for electrons in a quasilinear limit as $\bar{\Gamma}_\mathrm{e}=\bar{D}(R/L_{n_\mathrm{e}}+C_\mathrm{T}R/L_{T_\mathrm{e}}+C_\mathrm{P})$ and $\bar{Q}_\mathrm{e}=\bar{\chi}_\mathrm{e}(R/L_{T_\mathrm{e}}+C_\mathrm{N}R/L_{n_\mathrm{e}}+C_\mathrm{HP})$, respectively. Here, non-dimensional $\bar{D}$, $\bar{\chi}$, $R/L_n$ and $R/L_T$ are the particle and heat diffusivities in proportion to fluctuation amplitudes and the density and temperature gradients, respectively. The fluxes are composed of the diagonal (diffusion) and off-diagonal (pinch) terms, which are quantitatively determined by calculating the pinch term coefficients ($C_\mathrm{T,P,N,HP}$) and the diffusivities ($\bar{D}$ and $\bar{\chi}$). It has been confirmed that the original DeKANIS reproduces differences in the diffusion and pinch terms between plasmas with different density profiles$^1$. DeKANIS estimates the pinch term coefficients and the diffusivities with a neural network (NN) model, which is one of the machine-learning techniques. Besides DeKANIS, a couple of NN-based transport models are also now available$^{2, 3}$, but our model has different features from others’: In addition to the aforementioned flux decomposition, it contains original saturation rules of fluctuation amplitudes, as seen later.

The training dataset for the NN construction has been developed using core plasma parameters of 23 JT-60U H-mode discharges. The pinch term coefficients in the training dataset have been given by linear calculations of the local flux-tube gyrokinetic code GKW. On the other hand, there are two ways to estimate the diffusivities. The first one uses a semi-empirical saturation rule that evaluates $\bar{D}$ with experimental particle fluxes $\bar{\Gamma}_\mathrm{e,exp}$ in the JT-60Udataset. The NN model has been trained to reproduce the resultant pinch term coefficients and particle diffusivity $\bar{D}$. To cover ion heat transport, the NN also outputs the ratio of the effective electron heat diffusivity to the ion one ($\bar{\chi}_\mathrm{e,eff}/\bar{\chi}_\mathrm{i,eff}$), which is based on the linear calculations. The remaining heat diffusivity $\bar{\chi}_\mathrm{e}$ is determined not to break the Onsager symmetry between the off-diagonal terms of the particle and heat fluxes. We note that the saturation level of the fluctuation amplitude is estimated based on $\bar{\Gamma}_\mathrm{e,exp}$, without the use of the experimental heat flux $\bar{Q}_\mathrm{e,exp}$. The semi-empirical transport model is referred to as DeKANIS-1. The second way uses a theory-based saturation model, the introduction of which is the new feature of DeKANIS. In this paper, the following mixing-length-like expression$^4$ is used: $\bar{D}=1.86\times10^{-4}(\bar{\gamma}/\bar{k}^2_\theta)^{1.5}L^{-2.71}_\mathrm{ZF}$, where $\bar{\gamma}$ and $\bar{k}_\theta$ are the normalized local maximum linear growth rate and the poloidal wavenumber corresponding to $\gamma$, and $\bar{L}_\mathrm{ZF}$ is the residual zonal flow level. To apply the mixing-length-like model, the other NN model has been constructed to reproduce $\bar{\gamma}$, $\bar{k}_\theta$ and $L_\mathrm{ZF}$ that are given by the linear calculations. As to $\bar{\chi}_\mathrm{e}$, the Onsager symmetry is applied. This theory-based model is referred to as DeKANIS-2.

Both transport models give fluxes in $\sim10^{-3}$ second with a single CPU, which run $10^3$-$10^4$ times faster than the conventionally-used transport models, and they have been validated, using 14 JT-60U H-mode plasmas as test data. Fig. 1 demonstrates $\bar{\Gamma}_\mathrm{e}$ and $\bar{Q}_\mathrm{e}$ profiles and their breakdowns predicted by DeKANIS-1 and -2. In fig. 2, one can see that the accuracy of the two models is higher than that of TGLF at almost all radial points. It has been found that the fluxes for the training and test data are predicted with similar accuracy, which can be improved by optimizing hyperparameters.

DeKANIS-1 is more pragmatic in a known plasma parameter range since it uses the NN model that has learned the experimental values directly. As proof of the advantage, $\sigma_{\bar{\Gamma}_\mathrm{e}}$ of DeKANIS-1 is lower than that of DeKANIS-2 even for the test data (fig. 2 (a)). While DeKANIS-1 is suited to investigation of transport processes embedded in existing experiments, it is difficult to use outside the known parameter range. On the other hand, DeKANIS-2 uses the NN model relying purely on the linear gyrokinetic calculations. When DeKANIS-2 has been used for a different device, JET, it has been found that the accuracy tends to be higher than that of DeKANIS-1, though it is not as high as the accuracy for JT-60U. It therefore enables us to extend the applicable range towards higher-performance fusion plasmas as in JT-60SA. The features of the two models are useful for accurate prediction in various devices, leading to solid understanding of formation mechanisms of density and temperature profiles. 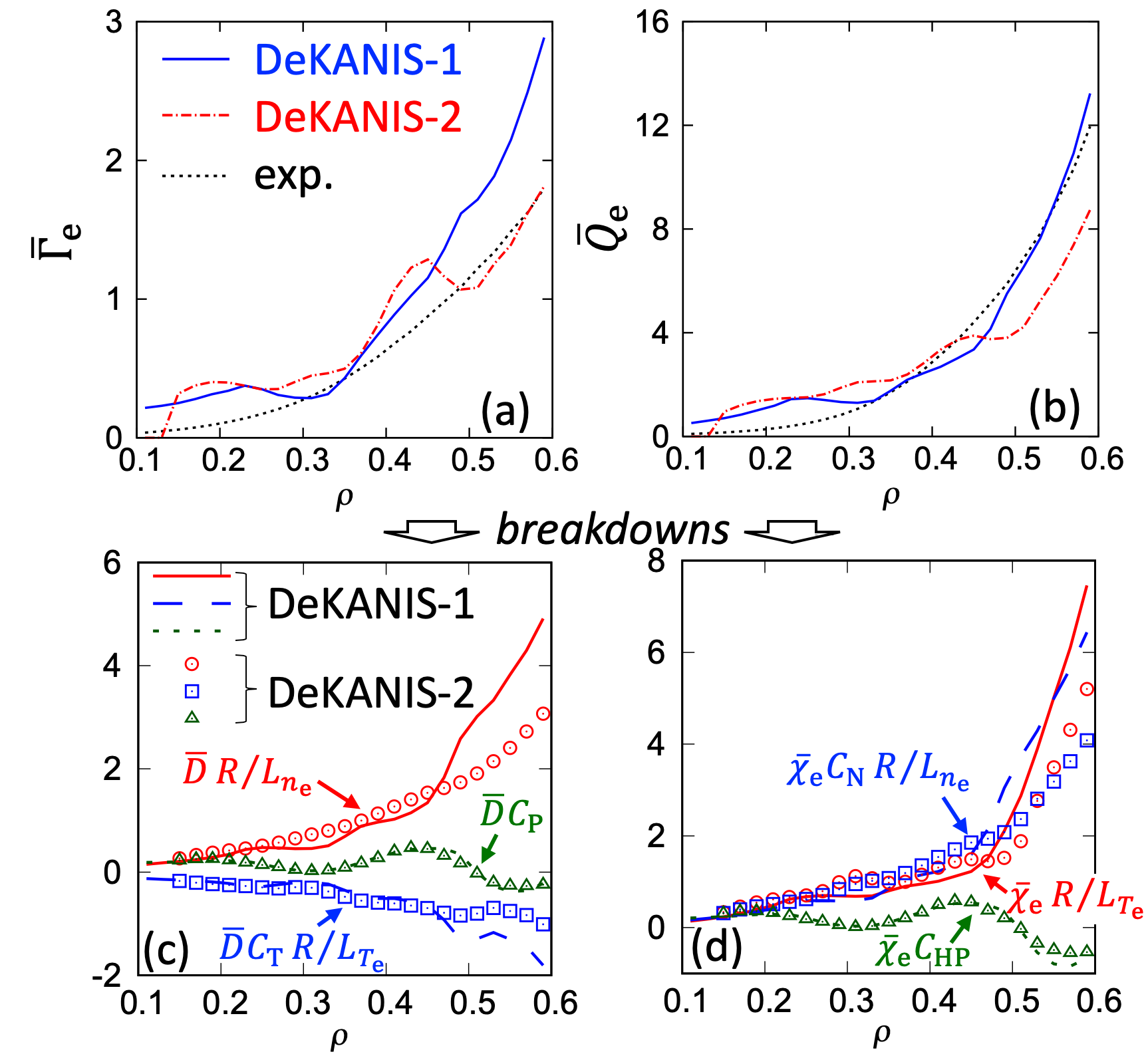