Electromagnetic emissions are seen in the frequency range covering the 1st to 7th harmonics of deuterium cyclotron frequencies on NSTX and NSTX-U [jointly, NSTX(-U)]. In many respects the fluctuations are similar to the ion cyclotron emission (ICE) seen in conventional tokamaks. Despite over three decades of experimental and theoretical studies, understanding of this phenomena remains qualitative at best (1). With the need for diagnostics of the confined fast ion population compatible with future burning plasma experiments, there has been a resurgence of interest in developing a theoretical interpretation of ICE. With a good theoretical model for ICE it may be possible to use measurements of ICE to put contraints on the confined non-thermal fast ion population. Despite the overall similarity of ICE observed on NSTX(-U) (narrow band emission near harmonics of the fast ion population cyclotron frequencies) to previous observations, there are significant differences between previous observations of ICE and the ICE on NSTX(-U) (2). These differences, while initially challenging to theoretical interpretations, might guide the development of a robust theoretical model of ICE. Additionally, the relatively low frequency of the ICE seen on NSTX(-U) allows for more detailed experimental measurements than were possible previously. 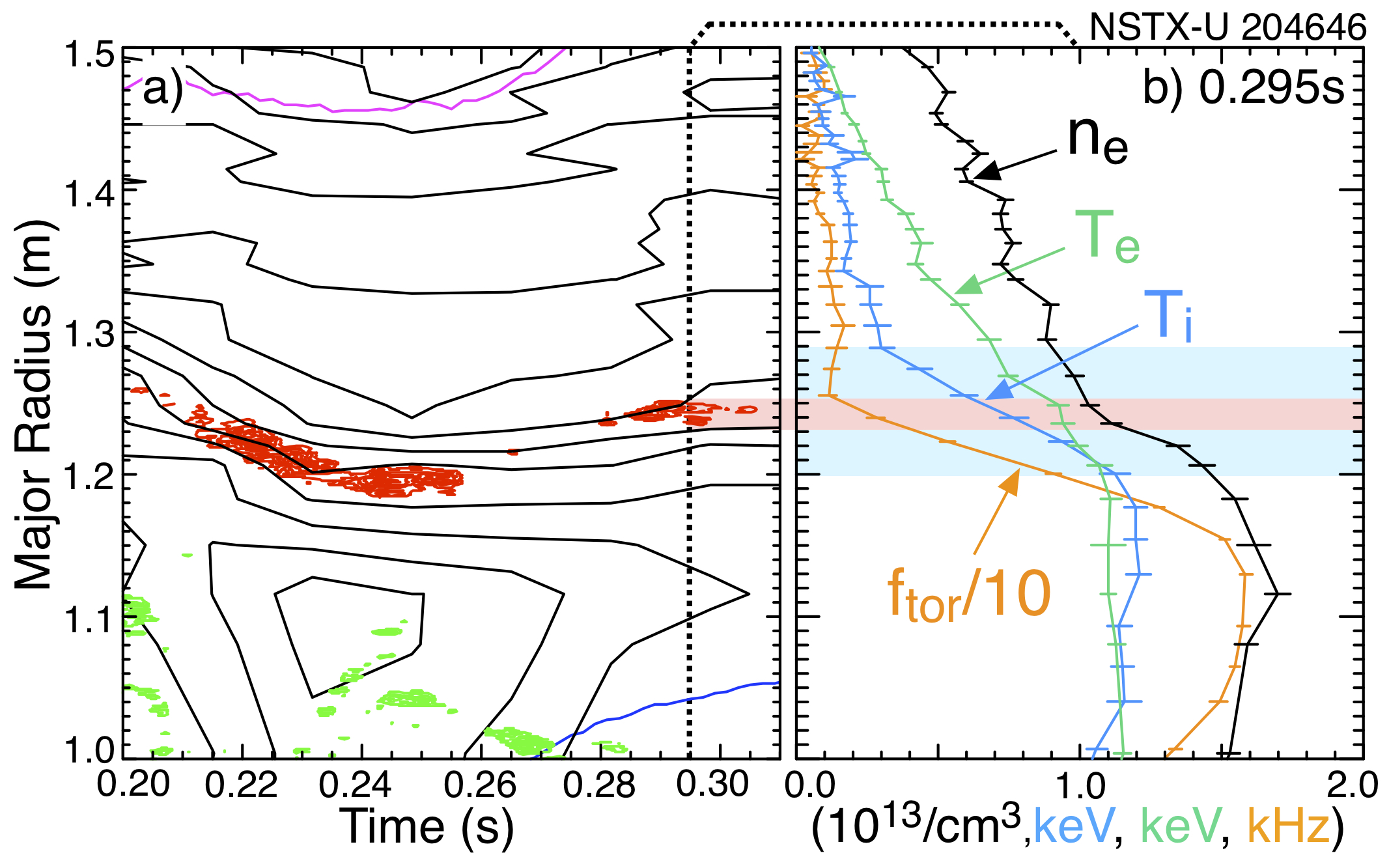 Four distinct variations of ICE have been identified on NSTX(-U). The first and most common type has many similarities to observations of ICE on conventional aspect ratio tokamaks, with the exception that the ICE frequency maps to the cyclotron frequency deeper in the plasma, not at the plasma edge (Fig. 1). This first type of ICE is seen at frequencies up to the seventh harmonic of the deuterium ion cyclotron frequency. A second type does not show the bursting character of the first type, but appears in a quasi-stationary state with only moderate amplitude modulation. Strong three-wave coupling between the ICE and lower frequency Global Alfvén eigenmodes was seen with this ICE. The third type of ICE is distinguished by longer, stronger bursts with substantial chirping (Fig. 2); while chirps downwards in frequency are typical, chirps in both directions have been seen. Another distinguishing characteristic of this third type of ICE is that only frequencies corresponding to the 2nd, 3rd, 4th and 6th harmonics of deuterium are seen. A fourth type, seen in an unusual plasma configuration, is a weaker, bursting ICE that appears to originate from a magnetic well in high current, low field and high 𝛽 plasmas. Each of the bursts are narrow in frequency, but scattered over a range in frequency that encompasses the magnetic well.

Direct measurements of the ICE have only been made with the high frequency Mirnov coil arrays which had a bandwidth of ≈ 1.8 MHz for NSTX and ≈ 3 MHz in NSTX-U. The number of high frequency coils in the array has increased from a single coil in initial experiments to 15 coils in the NSTX-U. The data acquisition rates in shots where ICE has been studied are 10 MHz (5 MHz Nyquist frequency) or 15 MHz in a few shots for fundamental ICE frequencies from 1.8 MHz up to 4.2 MHz. Thus the 2nd and higher ICE harmonics are typically aliased. The modeled sensor response shows an ≈1/f2 fall-off above the nominal bandwidth, but the ICE is still sufficiently strong to be clearly seen up to the 7th harmonic. 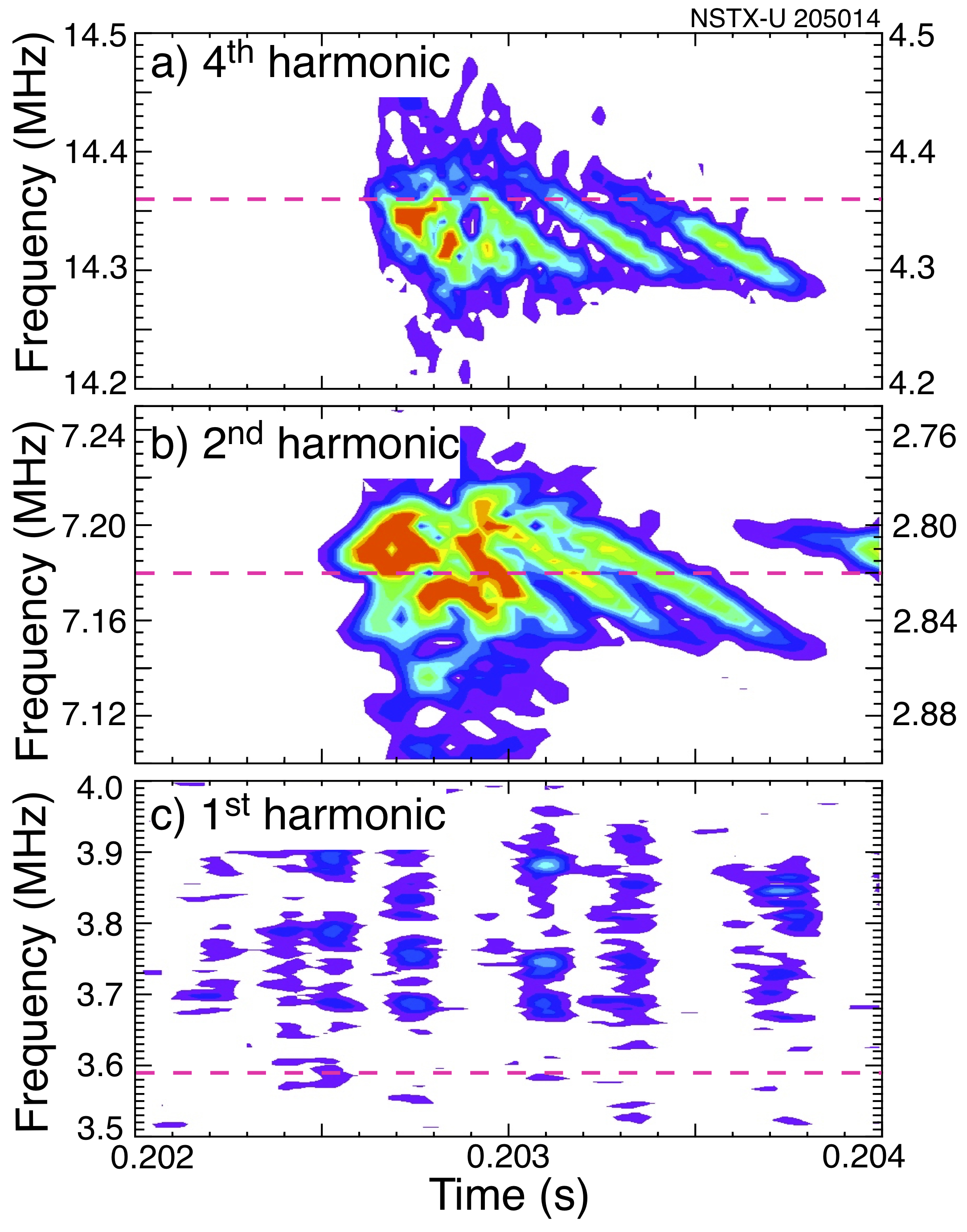 The toroidal array of fast Mirnov coils can be used to measure the toroidal wavelength of the ICE. The 1st harmonic ICE is typically best fit with a toroidal mode number of n = -1 (i.e., counter-propagating). The 2nd harmonic bursts, as in Fig. 2, are also typically counter-propagating, with n = -3. The counter-propagation of the ICE suggests excitation through an ion-cyclotron resonance. A partial poloidal array finds the ICE wave has opposite helicity to the equilbrium field. The ICE frequency maps to an ion-cyclotron resonance deep in the plasma. This location is strongly correlated to the radius at which the plasma rotation is locked to the wall (Fig. 1b). This location presents a challenge to theory in that the ICE should be strongly damped by the cyclotron resonance with the thermal ions.