Abstract: Electron beam injection (EBI) to spherical tokamak (ST) plasmas which are non-inductively produced by electron Bernstein wave (EBW) has been carried out for the first time in LATE. When an electron beam with energy of 100 $\sim$ 600 eV and current up to 800 A is injected, the electron density increases to more than 30 times the plasma cutoff density and is maintained by EBW and EBI. When the density increase is mild ($\sim$20 times the plasma cutoff density) at the early stage in EBI, the electron density profile, plasma images taken by a fast CCD camera and soft X-ray signals show the significant core heating around the electron cyclotron resonance layer. On the other hand, significant increment of plasma current is not observed. It may be partly because the feedback control of vertical magnetic field is not performed to maintain the tokamak equilibrium.

Non-inductive formation of tokamak plasmas is a very important issue for advanced low-cost tokamak reactors, especially STs. Electron cyclotron heating and current drive (ECH/ECCD) is a strong candidate. In LATE, ECH/ECCD by EBW which is an electrostatic wave and mode-converted from the injected microwave is used to form an overdense ST plasma with electron density more than 7 times the plasma cutoff density [1] [2]. For ramp-up of plasma current and increase of electron density and temperature during the start-up phase, electron beam is used for direct injection of momentum and energy efficiently. The power supply and the injector are rather simple and cost-effective for high power injection. Such a start-up method is known as helicity injection and performed successfully in some STs like Pegasus and NSTX. In those experiments, rather low electron temperature is pointed out and ECH is being planned. In this report, we have set up a new EBI system and studied the combined properties of heating and current drive by EBW and EBI for the first time. 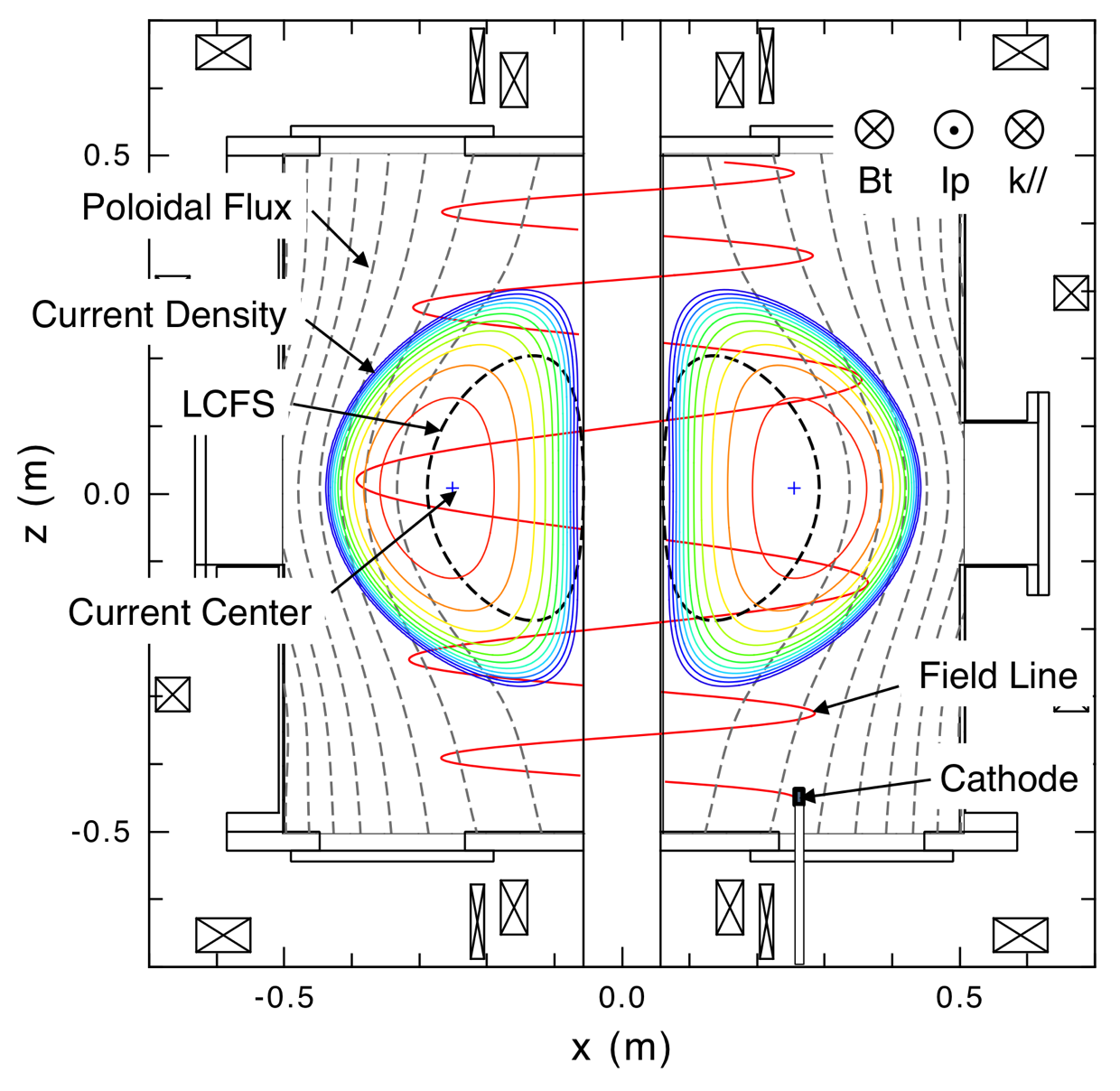 An electron beam injector with Mo cathode head (emission area size is 8 x 18 mm) is installed on the bottom side ($R_c = 0.255$ m, $Z_c = -0.45$ m) of the LATE device (center post radius $R_{in} = 0.057$ m, outboard wall radius $R_{out} = 0.5$ m, top and bottom wall height $Z = \pm0.5$ m). The emission surface is set normal to the toroidal direction. When a plasma contacts the Mo cathode head and a negative voltage relative to the vacuum vessel is applied to the head, the plasma works as an anode and an electron beam is extracted and flows into plasma roughly along the magnetic field lines. The direction of the beam is the same as that of the toroidal field $B_t$ and drift of electrons which carry the plasma current $I_p$. The collision of the beam with the injector or the bottom wall after one turn around the torus may be avoided because of the large pitch of the magnetic field as shown in Fig. 1. The power supply for EBI consists of a capacitor bank (20 kV, 250 $\mu$F) and two ignitron switches, one for start and the other for commutation to stop. Resistors (10 $\Omega$ in total) are connected in series to regulate the cathode current. Hydrogen gas is fed through slits in the cathode head to mitigate the ion bombardment. 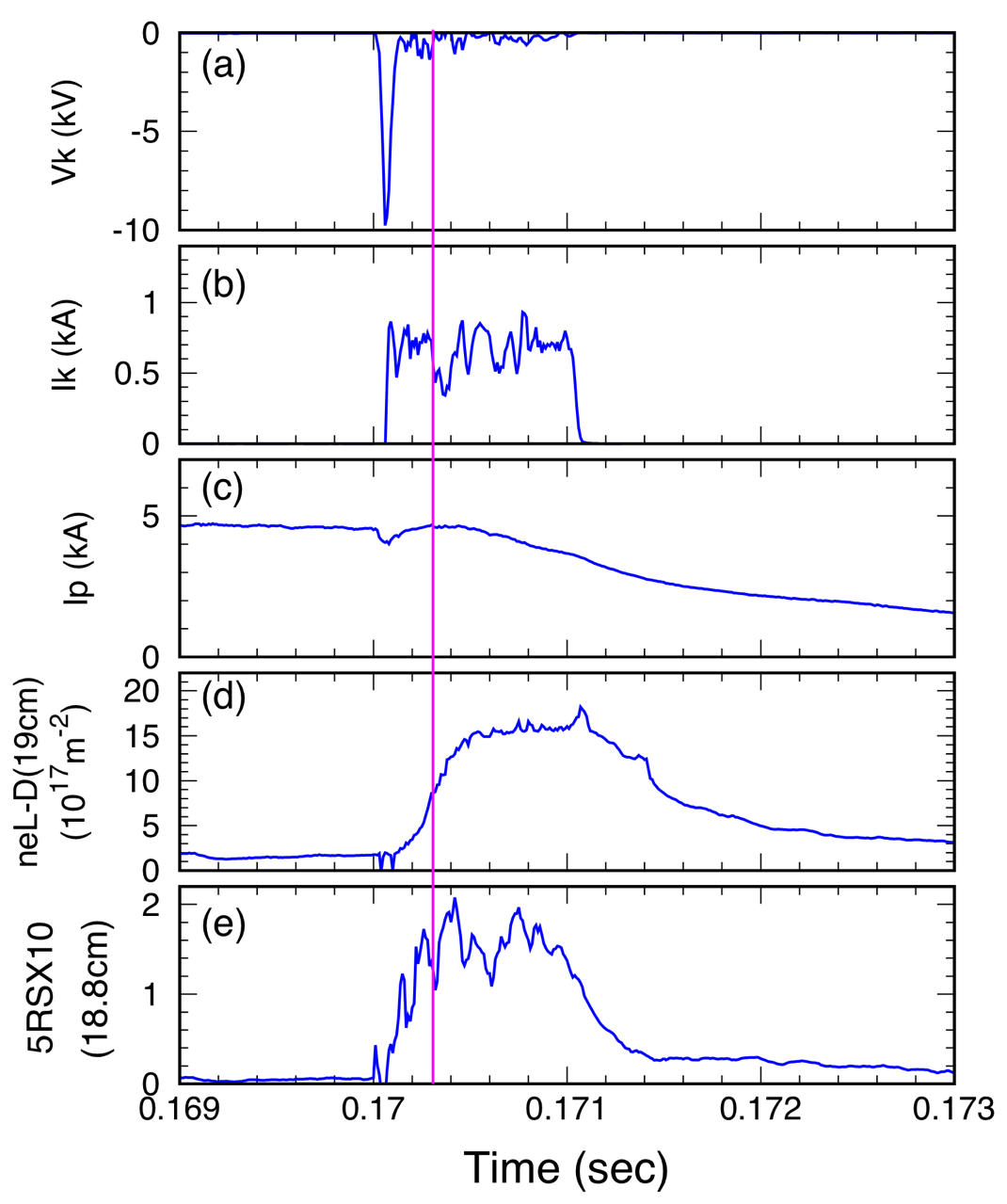 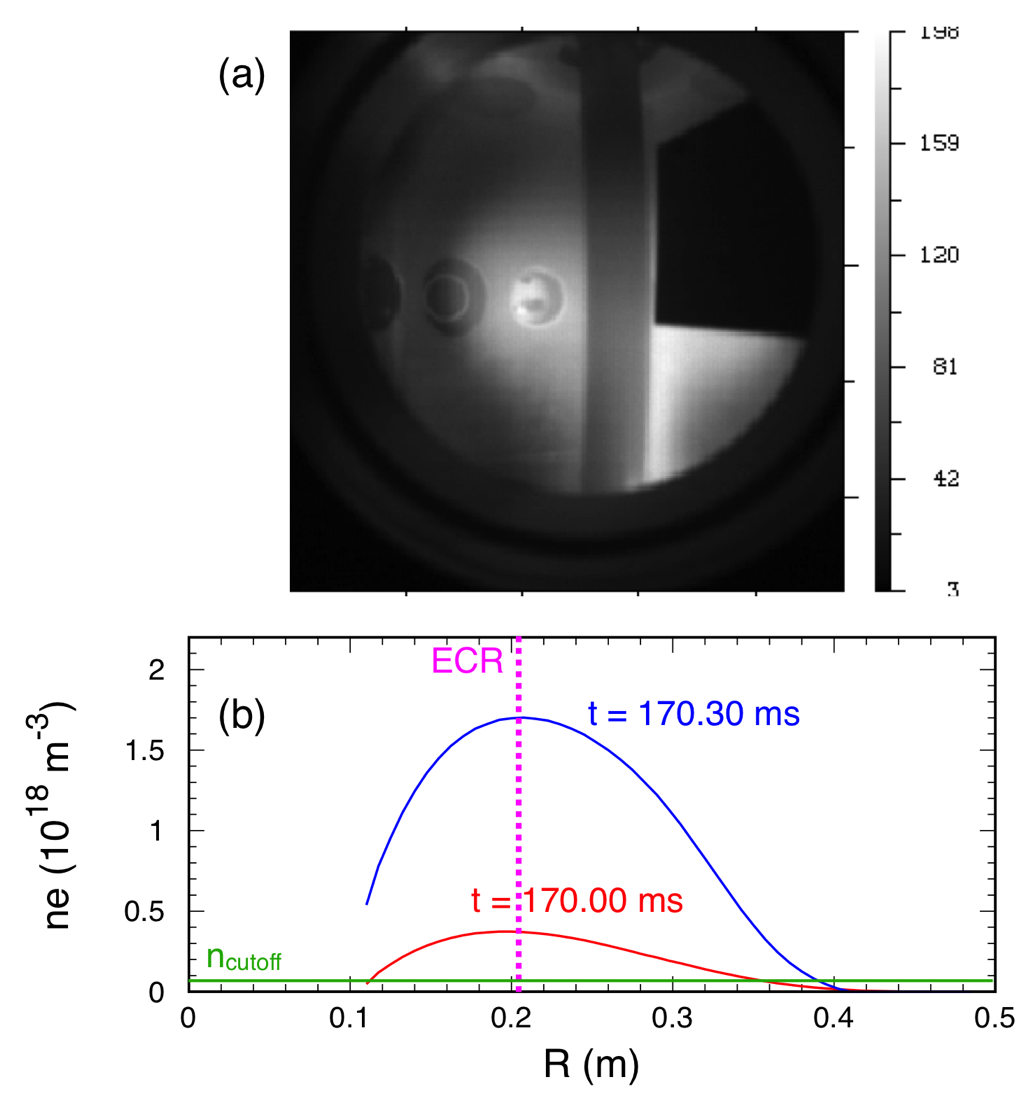