In the TST-2 spherical tokamak (ST), non-inductive start-up by lower-hybrid waves (200 MHz) has been studied and a plasma current of 27 kA was achieved [1]. However, further study is necessary to optimize the current drive [2]. An electron transport model is constructed to simulate electron diffusion in 2-dimensional phase space, and an X-ray emission model is constructed to simulate X-ray emissions. Comparison with experimental data shows that a major part of the LHW deposition power is lost by fast electrons hitting the outboard limiter, while a minor part is used to heat cold bulk electrons. The diffusion in real space is well described by the RF induced radial transport, which is often used to interpret fast ion diffusion in ICRF heating [3]. The present work clearly demonstrates the RF induced transport of fast electrons for the first time. In addition, this result implies that there is an appropriate density range and that the outboard power deposition is preferable.
Figure 1 shows the schematic configuration of the electron transport model. Electrons starting from a magnetic surface defined by $R_{\rm sin}$ and $R_{\rm sout}$ are accelerated or decelerated by the electric field of the lower-hybrid wave (LHW). Here we assume, the acceleration or deceleration occurs only at the inboard side, because the inboard power deposition is expected from ray traces [4] and electrons would spend longer time at the inboard side than at the outboard side due to the low aspect ratio configuration. As the co-directed parallel velocity increases by LHW, the orbit expands outward. The velocity would be slowed down through collisions with cold bulk electrons or ions or neutral molecules, and they are assumed to occur at both inboard and outboard midplane striking points ($R_{\rm in}$ and $R_{\rm out}$). By tracing many electrons we obtain the velocity ($V_{\rm ||}$) distribution function and the real space distribution functions. Equations (1) and (3) indicate that the velocity space diffusion induces real space diffusion. This is what we call RF induced transport. When the electrons reach the outboard limiter, they are lost and new cold electrons at $R_{\rm sout}$ (and $R_{\rm sin}$) are supplied by electron impact ionization of neutrals. The density of neutral is adjusted to preserve the number of electrons. Steady state velocity and real space distributions are obtained after a sufficient time (Fig. 2(b)), and we can calculate energy, momentum (i.e., current) and particle flow.

The model parameters, such as the velocity random walk step and the initial starting positions $R_{\rm sin}$, $R_{\rm sout}$, are adjusted to reproduce the following experimental parameters: LHW injection power: 60 kW, electron density: $2 \times 10^{17}\,{\rm m^{-3}}$, plasma current: 17 kA and the experimental hard X-ray emission shown later. From the model parameters and Eq. (3), we can also estimate the typical velocity $V_{\rm loss}$ ($\equiv R_{\rm sout} \Omega_{\rm pe} \delta R_{\rm out}/(R_{\rm sout}-R_{\rm sin})$) of the fast electrons hitting the outboard limiter (see Fig. 2(b)). Analysis of the obtained state reveals that about 44-49 kW is lost by the escaping electrons and about 6-10 kW is used for bulk electron heating, which is consistent with the measured bulk electron temperature ($T_e \sim 40\, {\rm eV}$) when we assume ITER IPB98(y,2) scaling for the energy confinement time. The obtained neutral density and particle confinement time for the fast electrons are reasonable.

The most critical test of the model is the comparison of the energy of fast electrons which hit the limiter, because the typical energy $m_e V_{\rm loss}^2/2$ is a function of $\delta R_{\rm out}$, and it can be approximated by the distance between the outboard limiter position and the outboard last closed flux surface position $R_{\rm LCFS}$, we compared the hard X-ray spectra for two discharges with different $R_{\rm LCFS}$s (Case I and Case II in Fig. 3). Since we do not know the exact $R_{\rm sout}$s, we assume the difference between $R_{\rm sout}$s in Case I and II are the same as those (30 mm) between the experimental $R_{\rm LCFS}$s. The X-ray spectrum from a molybdenum limiter for a given energy distribution of lost electrons is calculated using the method described in [5], but there are several ambiguities, and we cannot compare the absolute emission levels between the calculations and the measurements. Case I and II show a large difference in the spectral shape and the difference is well characterized by different $m_e V_{\rm loss}^2/2$. 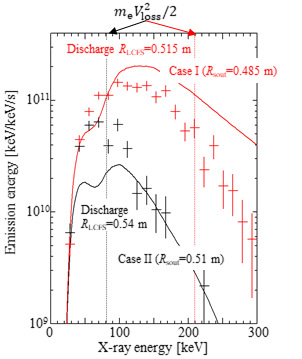