Multiple blob/plasmoid structures were measured for the first time in current sheet of merging spherical tokamak (ST) plasmas in TS-3U and TS-4U, using new high-resolution and high-accuracy print-circuit-board (PCB) type magnetic probe array. We found (i) formation of multiple current sheet blobs: initially one, finally three or four, partly due to current sheet deformation by Hall effect, (ii) merging of the multiple blobs into a single blob, (iii) existence of small plasmoid (=magnetic island) inside the blobs of current density, (iv) increase in reconnection electric field $E_t$ due to plasmoid ejection from the X-point region. The plasmoid ejection with large mass ejection from X-point area, increases $E_t$, suggesting large increase in reconnection heating power for the burning ST plasma formation.
We have been investigating on reconnection heating characteristics of merging ST plasmas for direct access to burning plasma without using any additional heating like NBI$[1]$. The reconnection heating depends on the current sheet structure which is left unsolved for a long time due to lack of high-resolution and high-accuracy magnetic field measurement. As shown in Fig. 1(a), we developed the PCB type magnetic probe array with 5mm-resolution$[2]$, whose accuracy is about 0.1%, about one order higher than the conventional value 1%. It made clear formation of a single plasmoid and multiple blobs in the current sheet of merging STs in Fig. 1(b) and Figs. 2(a)(b), respectively.

In Figs. 2(a)(b), the current sheet initially appears, then peaks at two positions and splits into three and/or four blobs. The magnetic field lines deformed by the tilt motion look promoting the current sheet splitting. The Hall current density $j_{Hall}$ indicated by black arrows in Fig. 2(c), deform/rotate the current sheets clockwise in Fig. 2(a) or counter-clockwise in Fig. 2(b), depending on polarity of applied toroidal field $B_t$ shown by red arrows: $\bigodot$,$\bigotimes$. Since electrons move along magnetic field lines much faster than ions, the current sheet always has radial Hall current $j_{Hall}$ flowing toward the X-point, as shown in Fig. 2(c). It also produces negative and positive potential wells for ion acceleration, as shown in Figs. 2(c)(d). The $j_{Hall}×B_t$ force rotates the current sheet, deforming the magnetic field lines (at 73µs), promoting multiple blob formations. Then, the four blobs merge together and finally relax into a single blob. As shown in Fig. 3, the current splitting period agree with ramp-up period of the reconnection electric field $E_t$. This fact suggests that the number of blobs increases with the sheet current ($=E_t/\eta$: resistivity). As shown in Figs. 2(a)(b), the size of current density blob tends to be 4-8cm that is 2-5 times larger than that of the magnetic island.
The next important question then arises as to how the blob formation and ejection influence the reconnection speed. In Fig. 1(b), the large-size single plasmoid grows in the center region and is ejected to the left side. At the same time, the common reconnected poloidal flux $\psi_{com}$ in the downstream increases significantly during 70-72µsec, because the ST plasma merging/reconnection transforms private fluxes $\psi_{private}$ of the two ST plasmas into their common flux $\psi_{com}$ as shown in Fig. 2(c). This large increase in $\psi_{com}$ agrees with increase in reconnection electric field $E_t=(d\psi_{com}/dt)/2\pi{r_X}$, where $r_X$ is radius of X-point. This fact indicates that the plasmoid ejection increases $E_t$ probably through its effective mass ejection. In Figs. 2(a)(b), positions of O-points (plasmoid) and X-points are indicated by white symbols: $\diamond$ and $+$, respectively. Similar but small plasmoid ejections are observed from 69 to 73µs in Fig. 2(a) and from 69 to 75µs in Fig. 2(b).
Figure 3 shows the time evolutions of plasmoid radial position r, its velocity $dr/dt$ and acceleration $d^2r/dt^2$ and the reconnection electric field $E_t$ at X-point when the large plasmoid is ejected from the X-point region in TS-3U. It clearly indicates that $E_t$ increases with $d^2r/dt^2$. The acceleration force for the plasmoid related with mass ejection from X-point area, is probably caused by the external compression force to the current sheet. The current sheet compression to the order of ion gyrodadius triggers onset of anomalous resistivity of the current sheet$[3]$, increasing reconnection electric field $E_t$ at X-point. The reconnection outflow speed increases with $E_t$, suggesting that the plasmoid ejection increases the reconnection heating power for our ST merging startup in agreement with our recent observation$[1]$. 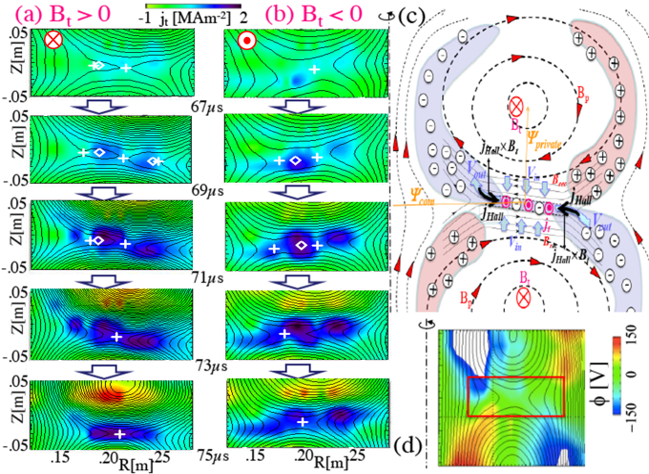 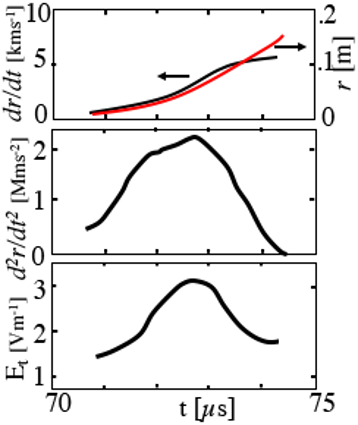 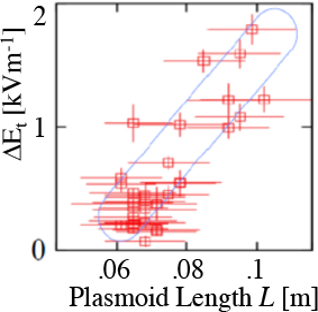 The amount of plasma mass ejected by plasmoid is observed to increase with $E_t$. Figure 4 shows the reconnection electric field increment $\Delta{E_t}$ before and after the plasmoid ejection, as a function of ejected plasmoid size (radial length of magnetic island $L$) in similar ST merging experiment TS-4U. We found that $\Delta{E_t}$ increases with $L$, probably because the mass ejection from the current sheet drives the plasma inflow to the current sheet region. Those facts indicate the effective mass ejection by plasmoid is a new fast reconnection mechanism for the merging ST plasmas. If the initial poloidal flux of merging STs was sufficient, this phenomenon was observed two or three times, indicting intermittent reconnection composed of the mass pileup phase and the mass ejection phase with transient increase in $E_t$ $[3]$.