The W7-X ICRH antenna prototype has been fully characterized and tested at FZJ Juelich. The first low power measurements of the antenna and capacitor units' individual scattering matrices, as well as very good agreement thereof with CST Microwave Studio 2017 simulations, have been reported in 1. Further low power measurements were recently carried out, namely the S-matrices of 1) antenna with the capacitors mounted, 2) idem with vacuum windows, line stretchers and transmission lines up to the matching unit and 3) idem including the matching unit. All have shown good agreement with the S-matrices calculated from individual measurements.

Fig. 1 shows the 2-port S-matrix of the antenna, magnitude and phase, with the two capacitors mounted with a particular setting, corresponding to an internal DC capacitance $C_{DC}\approx 200$ pF on both units. The effect of the RF adapters was removed from the measured results. The global S-matrix for the composite system was calculated from the individual measurements of the antenna and capacitors reported in 1, also suitably de-embedded. Evidently the agreement is quite good both in $|S|$ and $\Phi(S)$, with the exception of the small height difference in the magnitude peaks and the phase difference around 66 MHz. A potential source of discrepancy is the assumption, in the calculation of the composite S-matrix, that the fields are tangent to the reference plane where the individual components are connected. This is certainly the case when the individual measurement is performed, but not when the capacitors are mounted at the antenna ports due to the 3-D shape of the strap-to-capacitor transition. Modification of these connection points in the models did not yield an improvement in the comparison, hence this assumption does not significantly influence the results. 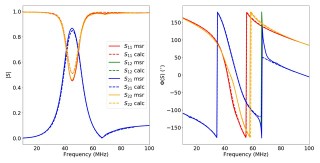 Fig. 2 shows the S-parameter measured at the generator side of the matching unit - including the matching unit itself, transmission lines, vacuum windows, capacitors and antenna. The line stretcher and stub settings are such that the system is nearly matched at 25 MHz, as evidenced by the downward peak at that frequency. Note that the system is also matched at other frequencies. The reconstruction reproduces essentially all the features of the measured S-parameter both in magnitude and phase, with the exception of several peaks at higher frequencies (notably around $\sim$ 80 - 90 MHz). The lengths of the many line segments included in the calculation were not known exactly, so it is to be expected that the discrepancy is larger in the higher frequency range (which is in any case outside of the operating range of the antenna). Similar results were obtained also with matching settings for 38 MHz.

Calibration data for the capacitor housing current and voltage probes has also been extracted from recent measurements. 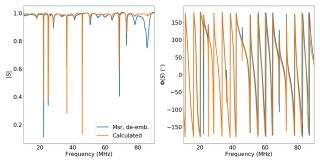 1 Stepanov I. et al. Measurements of the scattering matrix of the W7-X prototype ICRH antenna and capacitor units. To be published in 23rd Topical Conference on Radio Frequency Power in Plasmas (AIP Conference Proceedings).