In this paper we look at the functional requirements that NBI has in the various envisaged plasma scenarios for tokamak fusion reactors of the DEMO and fusion power plant (FPP) class and compare them with the constraints imposed by neutral beamline physics and technology. We show in particular that there is an intermediate beam energy range in which beamlines are unattractive because of size.
Besides being treated as one option for start-up heating and burn control in the pulsed European baseline DEMO1 [1], neutral beam injection (NBI) is a particularly attractive actuator for attaining steady-state operation in tokamak reactors, both because of its high achievable current drive efficiency as well as its ability to create rotational shear and fuelling in the edge region [2, 3, 4]. The neutral beam requirements for these two functions differ substantially; while driving rotation and fuelling favour low beam energies < 100 keV [2, 3, 4] with several tens of MW, current drive profits from much higher beam energy. Scenario simulations for DEMO machines have assumed beam energies up to 2000 keV [5, 6] for high NBCD efficiency and calculated a required NBI power between 135 and 210 MW. However, recent METIS simulations [4] for the proposed European Flexi-DEMO [7] indicate that off-axis NBCD may strongly increase the bootstrap fraction and thereby decrease the NBI power for steady state to about 110 MW, and that this power is practically independent of NBI beam energy in the range from 800 to 2000 keV, i.e. acceleration voltages upwards of 1 MeV may not be a necessary requirement. 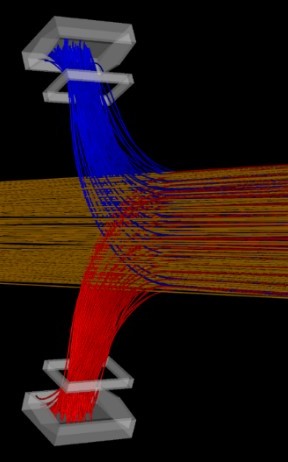 We calculate a number of figures of merit as a function of beam energy for an NBI beamline that delivers 25 MW of deuterium neutral beam power to the plasma. We consider both positive (PNBI) and negative-ion-based (NNBI) systems. As neutralisers we consider both the gas neutraliser (GN), that neutralises positive ions by charge exchange and negative ions by stripping, and the beam-driven plasma neutraliser (PN) for negative ions. In the latter, the passing ion beam itself ionises the neutraliser gas, and the resulting plasma is confined by cusp magnets surrounding the neutraliser tube, including magnets in bars on the entrance and exit sides. We use the model by Surrey, Holmes and Turner [8, 9] to predict the degree of ionisation in the neutraliser, the optimum target thickness that gives the maximum neutralisation yield and the corresponding gas flow. We iteratively change the extracted current in this procedure and scale the source and neutraliser cross-section accordingly, keeping the accelerated current density constant. We also consider transmission losses in the neutraliser and beamline, but assume a moderate improvement over the ITER NBI beamlines. We explore a further increase of the wall-plug efficiency through recovery of the energy of both positive and negative residual ions after the neutraliser by magnetic deflection and electrostatic deceleration. In particle tracking simulations (see Fig. 1) we find that deceleration to 5 % of the full beam energy is possible while still capturing all ions. We are not considering photoneutralisation in these calculations although it promises even higher yields, as current experiments are still orders of magnitude away from the requirements in laser power, cavity amplification and size, and its technical feasibility is anything but certain. 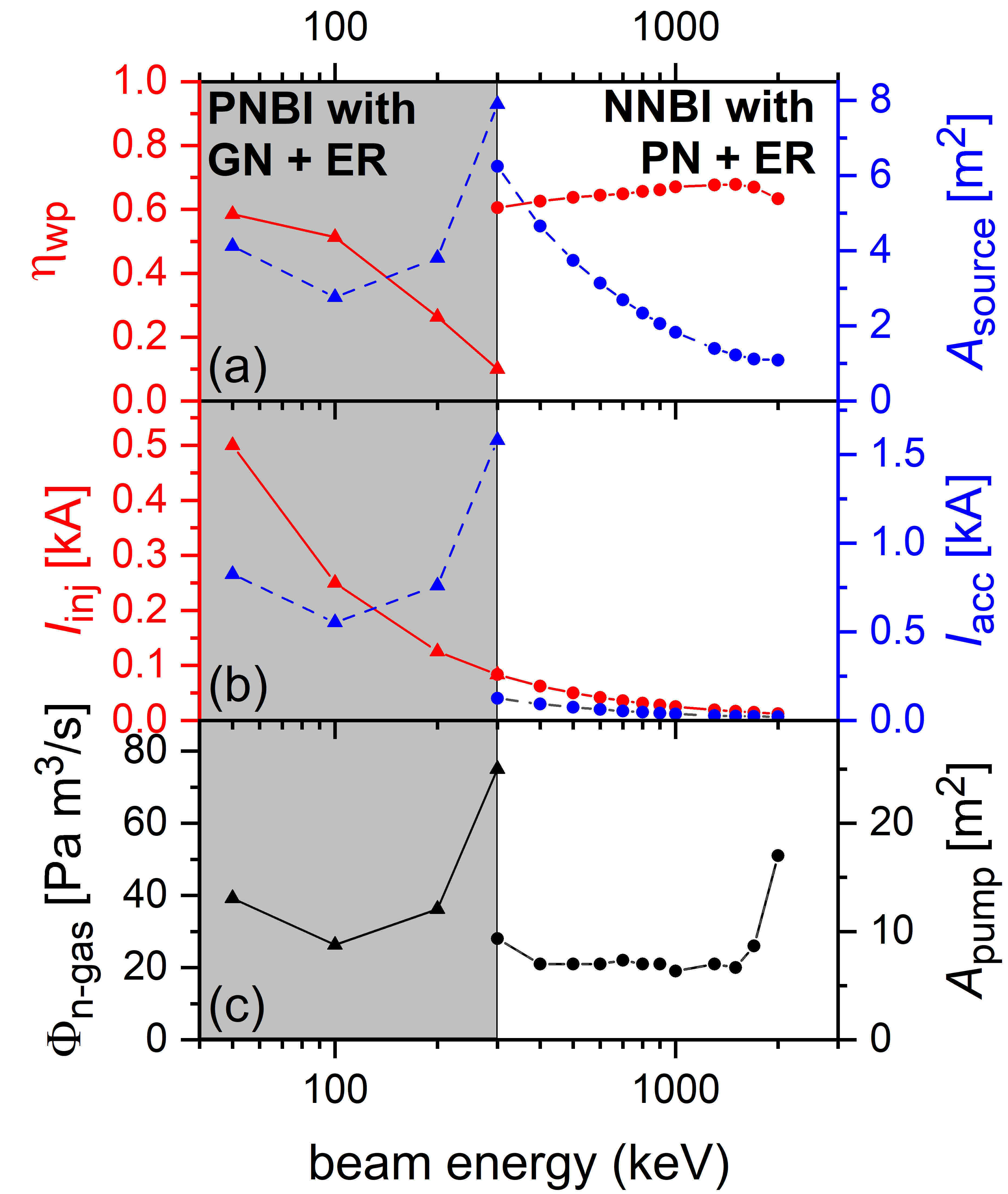 The main results of our study are shown in Fig. 2. For clarity we show only PNBI results with gas neutraliser and energy recovery (ER) below 300 keV, and NNBI with beam-driven plasma neutraliser (PN) and ER above 300 keV. In the low energy range (grey shaded) the achievable wall-plug efficiency $\eta_\mathrm{wp}$ (Fig. 2(a), left scale) can be as high as 0.6, but strongly decreases with increasing energy due to the decreasing neutralisation yield. Accordingly accelerated current and cross-sectional source area have to increase (Fig. 2(b)). This is the well-known reason why high beam energies require NNBI. In this high energy range $\eta_\mathrm{wp}$ (Fig. 2(a)) is practically constant and above 0.6. However, as for constant NBI power the equivalent current of the neutral beam has to increase as the beam energy decreases (Fig. 2(b)), the source dimensions also increase (Fig. 2(a)). Furthermore, the maximum current density that can be extracted from a negative ion source is about 1/10 of that of a positive ion source. Hence there exists an intermediate energy range between about 200 and 400 keV where the ion sources and beamlines become very large, for positive ions because of the low neutralisation and for negative ions due to the low current density and low energy per particle. In conclusion, this region is unattractive for NBI operation on reactor-class devices.
Another aspect with relevance for both beamline dimensions and efficiency is pumping. In order to keep reionization losses low, a high pumping speed is required that can only be provided by large cryo or getter pumps. The determined neutraliser gas flows was proportionally converted into a surface area of a non-evaporable getter (NEG) pump required in the beamline down-stream of the neutraliser (Fig 2(c)), assuming a pressure of $2\times 10^{–2}\ \mathrm{Pa}$ and a pumping speed of $75\ \mathrm{m^3/s}$ per $\mathrm{m^2}$ of pump surface. This area is constant over most of the high energy range, but increases again towards 2 MeV due to the higher required neutraliser gas flow.
Altogether, the whole range of energies considered for current drive appears feasible with negative-ion-based NBI. Energies closer to 2 MeV offer the advantage of reduced source size, but are more challenging from the high voltage point of view.