This study reports a progress toward realizing a high performance Cs-free negative ion source, that produces negative ions by volume production in a magnetized-sheet plasma device (TPDsheet-U). The experimental results show that this performance of the current density of the negative hydrogen ion beam J$_{c}$ without Cs on TPDsheet-U is a pproximately comparable to that of the negative ion source on ITER-NBI with Cs. Experimental observations show that (i) negative hydrogen ions are successfully extracted from the sheet plasma by single/multi-aperture grids, and (ii) the ratio of the extracted electron current I$_{EG}$(e) and hydrogen negative-ion current I$_{C}$(H-), I$_{EG}$(e)/I$_{C}$(H-) decreases from 5.0 to 1.0 with an increase in the height of the electron fence (H$_{EF}$), which is a physical filter that prevents electron diffusion from the extraction region. The J$_{c}$ is approximately 10-20 mA/cm$^{2}$ at the extraction voltage V$_{EX}$ of 9.0 kV, the discharge current I$_{d}$ of 80 A, the gas pressure of 0.3 Pa, and the magnetic field strength of 40 mT.

Most NBI systems in fusion devices use surface production with Cs. Without Cs, the current density that is based on volume production is < 2 mA/cm$^{2}$. If it is operated with Cs, the source can deliver a negative ion current density of over 20 mA/cm$^{2}$, which is 10–15 times higher. However, careful Cs control is required for the continuous operation of the NBI, which must be also regularly maintained. Thus, it is important to find alternative materials or to develop Cs-free methods. 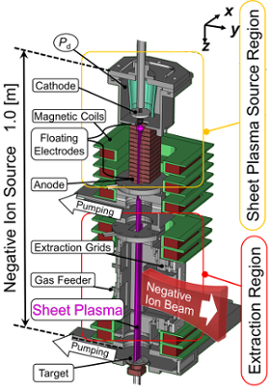 To produce and control negative hydrogen ions in plasma, we proposed to use magnetized-sheet plasma, which is produced by TPDsheet-U [1-3]. Magnetized-sheet plasma is suitable for generating negative hydrogen ions during dissociative attachment processes because high-energy (10–15 eV) and low-energy (1 eV) electron regions are narrowly spaced (e.g., 10–25 mm). This study is a work in progress toward realizing a Cs-free negative-ion source. This paper presents the characteristics of the extracted ion beam current using TPDsheet-U.
The experimental setup is a Cs-free negative-ion source using TPDsheet-U, which is schematically illustrated in Fig. 1. The hydrogen sheet plasma is introduced to the extraction region under the stationary magnetic field generated by rectangular coils and terminated by an electrically floating target. The discharge current is varied between 40 A and 80 A. The neutral pressure in the extraction region is controlled by feeding the secondary hydrogen gas at the pressure of approximately 0.3 Pa. To extract negative-ion beams, two different sets of grids are located in the extraction region (Fig. 1): single-aperture and multi-aperture extraction grids. The negative hydrogen ion beam is extracted by the two-grid extraction system [i.e., plasma grid (PG) and extraction grid (EG)] located at the periphery of the sheet plasma, as shown in Fig. 2. The diameter of PG is Φ 4 mm and that of EG is Φ 6 mm, and the gap between grids, d, is 4 mm. In the multi-aperture grid, each grid has 39 apertures, and the beam group is made of 13 × 3 apertures. With a field strength of 40 mT and V$_{EX}$ of 3–10 kV, the extracted current densities J$_{c}$ and J$_{EG}$ are measured at the collector (C) and EG, respectively. 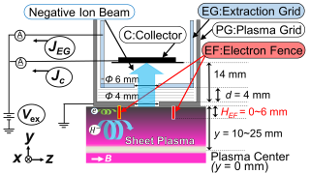 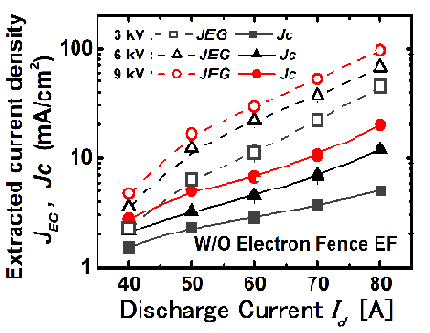 The electron fence (EF) bar is located on PG to suppress co-extracted electrons (Fig. 2). The dependence of the ratio of the extracted electron current I$_{EG}$(e) and hydrogen negative-ion current I$_{C}$(H-), I$_{EG}$(e)/I$_{C}$(H-), on the height of the EF bar, H$_{EF}$, is shown in Fig. 4. I$_{d}$ changes from 40 A to 70 A at V$_{EX}$ of 9.0 kV. The ratio of I$_{EG}$(e)/I$_{C}$(H−) gradually decreases with an increase in H$_{EF}$ and is approximately 0.5–1.3. Near PG, electrons are trapped with the EF bar owing to the smaller gyro-radius of the electrons. The gyro-radius of hydrogen negative ions is larger than that of electrons, and hydrogen negative ions can pass through the electron fence bar. This result shows that electrons are effectively suppressed by the EF bar. 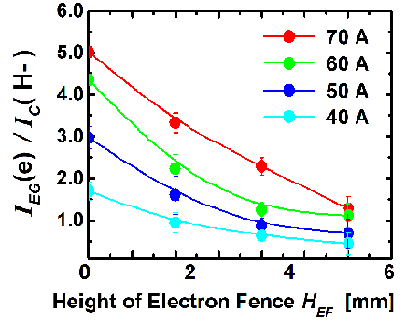 Multi-aperture grids have 39 holes to extract negative ions, which results in an increase in the extracted current depending on the number of apertures. In the multi-aperture setup with four EF bars (H$_{EF}$ = 6 mm, 4 mm, 4 mm, 6 mm), the extracted negative ion beam current I$_{C}$ increases with an increase in I$_{d}$. At an extraction voltage of 9.5 kV and a discharge current of 80 A, the current density of the negative hydrogen ion beam is approximately 23 mA. These shows that hydrogen negative ions are successfully extracted from sheet plasma.

This study indicates the importance of investigating the characteristics of extracted beam current in a magnetized-sheet plasma device (TPDsheet-U) without Cs and the possibility of achieving the continuous operation of the NBI without Cs.