Megawatt (MW) gyrotrons with a wide frequency range from 14 to 300 GHz are being developed for fusion devices in collaboration with fusion research institutes. (1) In the experimental test of a new 28/35 GHz dual-frequency gyrotron which has achieved world record power of 1.65 MW at 28 GHz, the cooling characteristics of a double-disk sapphire window were evaluated. The output power of 0.13MW with a pulse width of 30 s was demonstrated at 28 GHz. Comparing the experimental results with the calculated results the capability of 0.4 MW with a continuous wave (CW) at 28 GHz has been confirmed. (2) Detailed designs and fabrication for a 14 GHz 1 MW gyrotron are currently in progress. The calculated transmission efficiency to the corrugated waveguide was drastically improved to 94%, which was achieved by introducing a design concept (direct RF beam coupling by built-in waveguide) to minimize the RF transmission path.

Electron cyclotron heating (ECH), electron cyclotron current drive (ECCD), and electron Bernstein wave (EBW) heating are attractive and promising schemes for achieving heating, current drive and plasma control of fusion magnetic confinement systems, especially in future dense and large-core plasma control. Gyrotron is a powerful and essential tool for ECH and ECCD. Currently, we are collaboratively developing MW-class gyrotrons, which cover a wide frequency range (14–300 GHz), to be incorporated in the existing and future fusion devices. In the relatively low-frequency region of 14–35 GHz, there are technical difficulties compared to high-frequency gyrotrons because of the long wavelength and the large divergence of the RF beam. Particularly, the 14 GHz gyrotron with built in mode convertor has not been developed until now due to those difficult issues. The development of MW gyrotrons in this low-frequency range and their applications in nuclear fusion experiments are useful for nuclear fusion research.
The 28 GHz gyrotron developed for GAMMA 10/PDX, which achieved an output power of 1.38 MW, is applied to the QUEST plasma experimental campaign. An over-dense plasma with a density of more than 1×1018 m-3, which is higher than the cut-off density at 8.2 GHz, was produced, and an unprecedented EC-driven plasma current of approximately 80 kA was non-inductively achieved by a 28 GHz injection [Ref.1]. These successful results lead to the 28 GHz gyrotron application program at NSTX-U. In the 2018 experimental test of the new 28/35 GHz dual-frequency gyrotron (2 MW for 3 s and 0.4 MW CW) for QUEST, NSTX-U, Heliotron J, and GAMMA 10/PDX, an non-saturated output power of 1.65 and 1.21 MW were observed at 28.036 and 34.83 GHz frequencies, respectively [Ref.2].
In the current 2019 experimental test at 28 GHz, the cooling characteristics of a double-disk sapphire window were evaluated, because window cooling performance is the critical quantity limiting the CW power. Temperature evolution at the center of the output window, i.e., a temperature increase during oscillation and temperature decay after oscillation, was measured by an infrared (IR) camera. A photograph of the experimental test setup and a structural cross-section of the double disk sapphire window are shown in Fig.1. The time evolutions of the measured and calculated window temperature of the gyrotron with the 28 GHz operation are shown in Fig. 2. At the operation of 0.13 MW 30 s, the measured window temperature increased during the operation period and tended to saturate at approximately 42 °C (solid curve). The heat transfer coefficient h from the sapphire disk to coolant was estimated by comparing these calculated results and the experimental measurements using the three operation parameters of 0.13 MW 30 s, 0.22 MW 10 s, and 0.27 MW 8 s at 28 GHz, and h was estimated to be 1200–1500 W/m2K. The calculated result for 0.13 MW 30 s oscillation with 1200 W/m2K is plotted with closed circles. Further, the measured and calculated results with 1500 W/m2K for 0.27 MW 8 s oscillation are plotted with a dashed curve and open circles, respectively. The output power and pulse width limited by the cooling water flow rate of the water load and the collector, and the power supply. 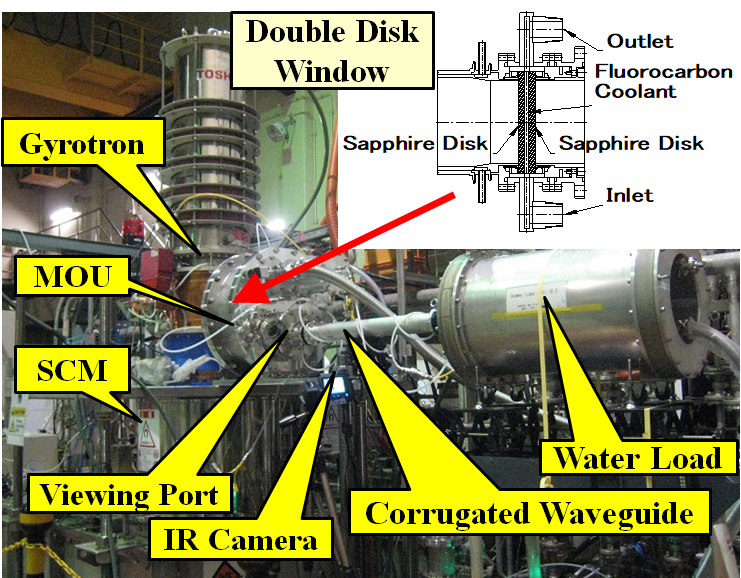 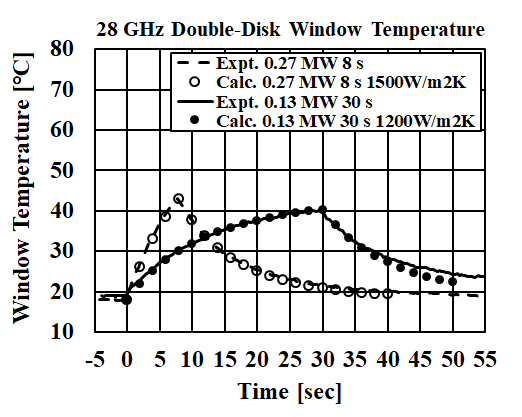 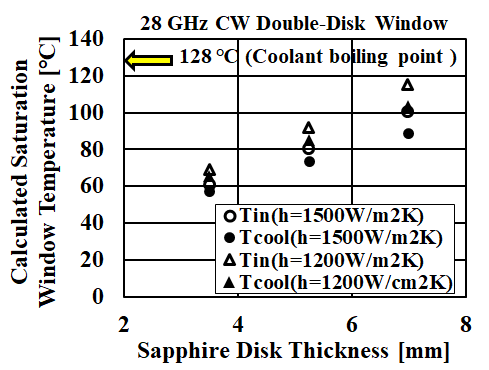 Detailed designs and actual fabrication of a new 14 GHz gyrotron for QUEST and GAMMA 10/PDX are currently in progress [Ref.2]. For a 14 GHz RF beam with a large divergence, the transmission efficiency of 94% to the built-in corrugated waveguide was obtained by minimizing the RF transmission path. For further improvements in transmission efficiency, a built-in corrugated horn antenna is being designed using a 3D full-wave electromagnetic fields simulator HFSS (ANSYS com.).