As magnetic fusion devices operate at higher power, it is increasingly important to achieve an improved theoretical understanding of edge plasma turbulence and transport in order to control core energy confinement and to maintain the necessary limit on plasma heat flux to surrounding material components. Making use of advanced numerical methods from the computational fluid community and building on the success of continuum core-region codes (e.g., GYRO, GENE) the continuum finite-volume gyrokinetic code COGENT has been developed for edge plasma simulation. The code is unique in that it is based on a consistent high-order discretization and interpolation of the underlying equations, and hence the error (in particular near the X-point) can be bounded. It utilizes multiblock grid technology, in which logically distinct blocks are smoothly mapped from rectangular computational domains and a high-order interpolation is used to provide data communication between the blocks. To facilitate simulations of highly anisotropic plasma turbulence and transport the spatial grids are typically chosen to be aligned (or nearly aligned) with the magnetic flux surfaces in 4D or magnetic field lines in 5D. To facilitate time integration of physics problems involving multiple time scales an Additive Runge-Kutta (ARK) Implicit-Explicit (ImEx) method is used, such that selected stiff-terms (e.g., diffusion-like) can be advanced implicitly. The COGENT code solves full-F gyrokinetic equations for an arbitrary number of plasma species, which can also be coupled to a set of lower-dimensionality fluid equations in cases where a reduced fluid model is adopted to describe electrons or neutrals. Presently, the long-wavelength electrostatic limit is utilized and the options for self-consistent electrostatic potential variations include the gyro-Poisson equation, which supports kinetic electrons, and the quasi-neutrality equation, $\nabla \cdot j=0$, which can be coupled to a fluid electron model. The code offers a number of collision models, ranging from the simple Krook operator to the fully nonlinear Fokker-Plank (FP) operator, and includes an ad-hoc anomalous transport model that can be utilized for the case of 4D axisymmetric transport calculations.

COGENT is the only continuum gyro-kinetic code that can simulate 4D/5D edge plasma dynamics in a divertor geometry, which spans the magnetic separatrix of a tokamak. After a series of detailed verification studies, the first 4D (axisymmetric) full-F continuum gyrokinetic calculation adopting a simple (isothermal) model for electrons and an ad-hoc model for neutral density was performed for parameters characteristic of the DIII-D tokamak [1]. The simulations demonstrated the values of intrinsic rotation and radial electric field qualitatively similar to those observed in DIII-D experiments. More recently, a full-F 5D version of the COGENT code has become operational. A numerical algorithm utilizing locally a field-aligned multiblock coordinate system has been implemented to facilitate simulations of highly-anisotropic microturbulence in the presence of a strong magnetic shear. In this approach, the toroidal direction is divided into blocks, such that within each block cells are field-aligned and a non-matching (non-conformal) grid interface is allowed at block boundaries. The toroidal angle is playing the role of the “coarse” field-aligned coordinate, whereas the poloidal cross-section, comprised of the radial and poloidal directions, is finely gridded to resolve short-scale perpendicular turbulence structures and to support accurate re-mapping (interpolation) at block boundaries. In order to (a) facilitate verification activity and (b) demonstrate the efficiency of the field-aligned approach, the 5D single-block version of the code that uses the standard (non field-aligned) coordinate systems such as slab, cylindrical, or toroidal is maintained as well. The multiblock field-aligned version of 5D full-F COGENT code was successfully verified in simulations of the collisionless (universal) instability in a sheared slab geometry and ITG instability in a sheared toroidal annulus geometry by comparing against the Cyclone Base Case test results [2].

The present work reports on the first continuum gyrokinetic simulations of the ion-temperature-gradient (ITG) driven instability in a single-null geometry. The simulation model solves the long wavelength limit of the 5D full-F gyrokinetic equation for ion species coupled to the 3D quasi-neutrality equation for electrostatic potential variations $\nabla \cdot j=0$, where a fluid model is used for an electron response. The fast electron time scales that are present in the fluid electron model (e.g., time scales due to rapid electron conductivity), are treated implicitly by making use of the ARK method. Figure 1 shows self-consistent potential perturbations for the ITG mode obtained in illustrative COGENT simulations for the case of a model single-null geometry. The grid resolution corresponds to $N_ψ=160,N_ϕ=8,N_θ=640, N_{v_\parallel}=32,N_\mu=24$, and the simulation uses 1344 Haswell cores on the NERSC cluster. A single time step corresponds to $3 \times 10^{-8} s$ and takes 3 s of wall time. 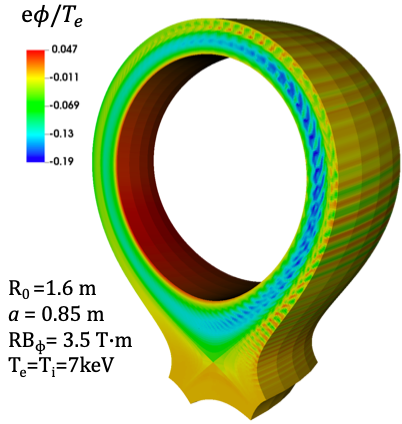