Both linear MHD and 3-D nonlinear MHD analysis to determine the viability of the QH-mode operating regime without ELMs is investigated for ITER Pre-Fusion Operation (PFPO) 7.5MA/2.65T and 5MA/1.8T plasmas as well as for the Q = 5 steady-state scenario 10MA/5.3T. The linear stability of these ITER scenarios has been investigated by studying the ideal MHD stability limits with respect to peeling-ballooning modes at the pedestal of these ITER plasmas with the linear ideal MHD code MISHKA-1 [1], in which it is assumed that the plasma is surrounded by a vacuum and an ideally conducting wall. Nonlinear MHD simulations for ITER PFPO 7.5MA/2.65T [2] and 5MA/1.8T [3] plasmas have been performed for first time with the JOREK code [4,5]. The non-linear evolution of MHD modes with toroidal mode numbers n from 0 to 10, including both kink-peeling modes and ballooning modes has been investigated, in addition, the influence of the ExB rotation on the access to QH-mode-like conditions for these two ITER scenarios has been evaluated.
The standard ITER scenarios based on the ELMy H-mode are expected to have large amplitude ELMs resulting in large plasma energy losses on a fast time scale which may lead to an enhanced erosion of the divertor target and limit its lifetime. The quiescent H-mode (QH-mode) [6,7] is a high performance regime with constant density and radiated power but no ELMs, which means there are no pulsed divertor particle and heat loads to the plasma facing components (PFCs). In the QH-mode, the ELM bursts are replaced by a saturated MHD instability, the so-called edge harmonic oscillation (EHO), which provides stationary enhanced edge particle transport and limits the plasma pressure to just below the peeling-ballooning stability limit [8]. In recent years the DIII-D experiments have shown that QH-mode plasmas can be accessed at ITER’s value of collisionality and beta with excellent energy conﬁnement quality, even at very low plasma rotation with zero net NBI torque [9]. Such QH-mode regime can be a promising operational scenario for ITER high Q plasmas by providing the stationary plasma without ELMs.
JOREK nonlinear MHD simulations have been validated with DIII-D QH-mode plasma experimental measurements and applied to the ITER Q=10 DT H-mode 15MA/5.3T scenario as reported in previous work [10,11,13]. The 3-D nonlinear MHD simulations of QH-modes with the JOREK code for the ITER Q=10 DT H-mode scenario indicated access to the QH-mode regime is in principle possible and can be sustained with certain ExB rotation although the particle flux associated with the EHO in these conditions is low (no density pump-out). ITER will access H-mode conditions in the PFPO phase with lower plasma currents and fields. It is therefore necessary to assess whether QH-modes will be accessible in ITER low current/field scenarios with q95 ~ 3 during in PFPO as well as in the 10 MA/5.3 T DT Q=5 steady-state scenario.
Linear ideal MHD analysis of ITER low current/field plasmas with q95 ~3 with MISHKA shows that in the stability diagram for peeling-ballooning (PB) stability the edge plasma pressure sits in the unstable region near the side of the ballooning stability boundary. As shown in Fig. 1, the blue star in the PB diagram for the 7.5MA/2.65T plasma is at the ballooning unstable boundary. On the contrary, nonlinear MHD simulations for this plasma with JOREK show that the edge MHD modes saturate into low-n kink/peeling modes which dominate in the stationary state. As shown in Fig. 2 the level of the magnetic energy of the n=4 mode is much larger than that of other modes in stationary conditions. The features of density and temperature profiles in these conditions resemble those characteristics of EHO.
JOREK nonlinear simulations for ITER 5MA/1.85T plasma show a different result. In this case a ballooning mode is the dominant mode and saturates to a stationary state, which is consistent with the linear PB stability analysis. The influence of ExB rotation shear at the pedestal on non-linear MHD stability for these two ITER low current/field plasmas has also been studied. The simulations show that E×B rotation can suppress high-n modes and also destabilizes low-n KPMs; this favours both ITER plasma scenarios to access the QH-mode regime and to sustain it in steady state, which is in agreement with previous Q = 10 ITER simulations as described above. More detailed analyses and results of non-linear MHD modelling for ITER PFPO H-mode plasmas and for the Q=5 10MA/5.3T DT steady-state scenario including the use of 3-D extrinsic magnetic perturbations with the ITER ELM control coils for QH-mode access will be described in the paper.
This work has been supported by ITER project under contract IO/17/CT/4300001505. The views and opinions expressed herein do not necessarily reflect those of and the ITER Organization. 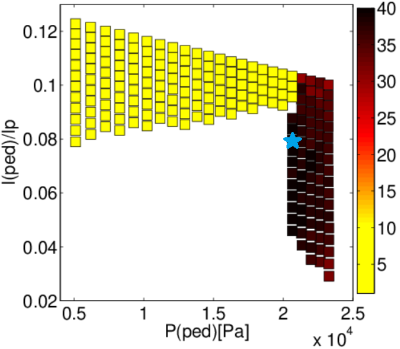 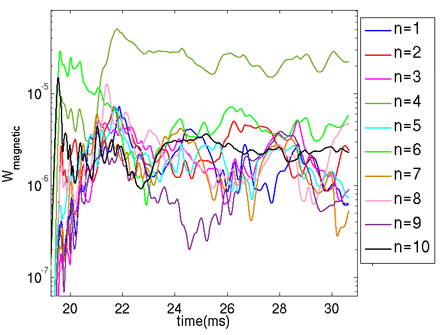