Tungsten (W)-coated divertor tiles were installed in the wide area of the closed divertor of one inner-toroidal section out of the ten toroidal sections in the Large Helical Device (LHD). The visible and extreme ultraviolet (EUV) spectroscopic measurements show the different dependence of emission intensity of neutral W atoms and highly ionized W ions (W$^{24+}$~W$^{29+}$) on the line-averaged electron density in NBI plasmas. The different dependence suggests that an intrinsic mechanism to reduce core W concentration is observed in helical systems. The suppression of the carbon flakes, which is generated by the exfoliation of a deposition layer formed by eroded carbon divertor tiles is confirmed at the W-coated divertor section. A carbon flake often causes undesirable impact on the particle control in a long pulse discharge in LHD. The results suggest that W-coating is effective for the particle control. The surface analysis shows that the coated W at the strike point was eroded on some divertor tiles. Based on the analysis of divertor plasma parameters and spectroscopy data, the erosion is considered due to carbon bombardment originating from graphite divertor tiles remaining in the torus. The results suggest that understanding of role of low-Z impurity is important to predict a lifetime of W divertor in future devices, where the low to medium Z impurity exist as auxiliary impurity to aid divertor heat load mitigation.

Tungsten (W) has been selected as the divertor material of ITER. It is an important subject to understand the impurity transport of W in fusion plasmas, and consequently to control the W flux into the main plasma. Also, the investigation of the effect on W material on wall retention of fuel particles is important for the establishment of stable particle control. In the previous study, we installed three VPS-W tiles to investigate the effects of W tiles on the LHD plasma and plasma-wall interactions $[1]$. However, the effect was not clear due to the limited installation. In order to investigate the effect more clearly, we have installed W-coated divertor tiles in the wide area of the closed divertor in LHD.

As shown in Figure 1, 10 $\mu$m of W coating on the isotropic graphite tiles (IG-430U, Toyo-tanso) by magnetron sputtering was selected for this study. Molybdenum (Mo) interlayer of 2 $\mu$m is introduced between W and graphite tiles. The W-coated tiles were installed in one inboard side closed divertor section out of the ten toroidal sections, where the relative high heat flux is reached. As shown in Figure 1, 56 closed divertor tiles and 32 sets of dome structure tiles in one toroidal section of the closed divertor system were coated. The high heat flux test facility ACT2 using electron beam experiment shows that W-coating survived without delamination up to 12.5 MW$^2$ for 3 seconds. 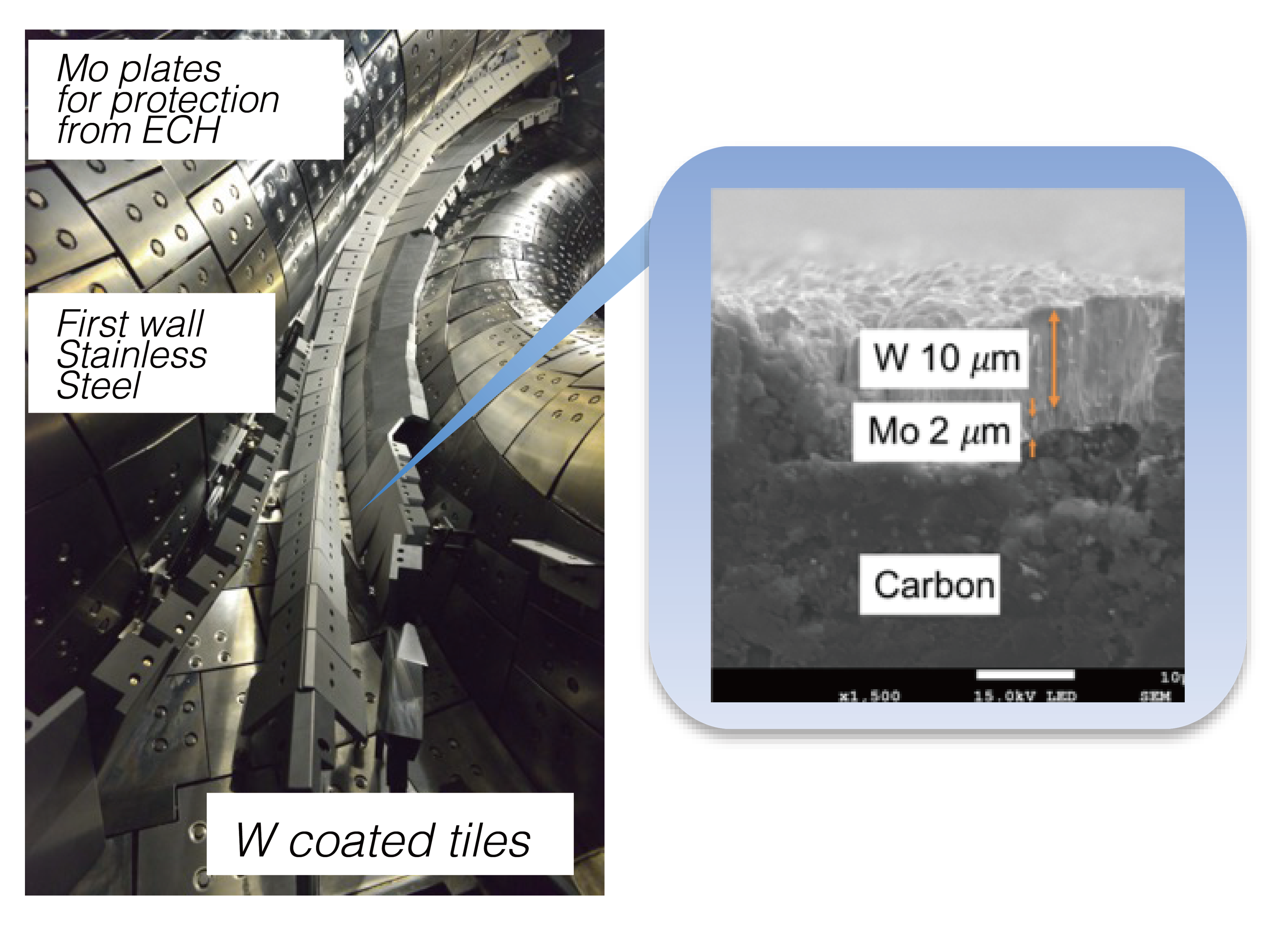 Divertor visible spectroscopy was conducted to investigate plasma-surface interaction in the W-divertor region. Also, EUV spectroscopy was conducted to observe behaviours of tungsten impurity ions in the core plasma region. Figure 2 shows density dependence of source and core concentration of W in NBI plasmas. The port-through power of the NBI was 7.8 MW for all discharges shown in the figure. W source deduced from WI intensity by the visible spectroscopy decreases with electron density. On the other hand, core concentration of W deduced from the unresolved transition array (UTA) spectrum of W$^{24+}$~W$^{29+}$ integrated over 50-51 A$^{\rm o}$ measured by EUV spectroscopy increases with the electron density and peaked at $3 \times 10^{19}$ m$^{-3}$. Then the intensity decreases in further high density ($4\times 10^{19}$ m$^{-3}$). Although the UTA intensity strongly depends on the electron temperature, the slight reduction of the electron temperature from 2.3 keV to 2.1 keV accompanying the change of the electron density from $3\times 10^{19}$ m$^{-3}$ and $4\times 10^{19}$ m$^{-3}$ is less likely to be the reason for the significant reduction of the UTA intensity. The results suggest that the W transport is changed by the electron density and the impurity screening effect by the ergodic layer may be one of the candidates for an intrinsic mechanism to reduce the core W concentration. The impurity screening of high Z impurity such as iron in the ergodic layer has been observed in previous study in LHD $[2]$. 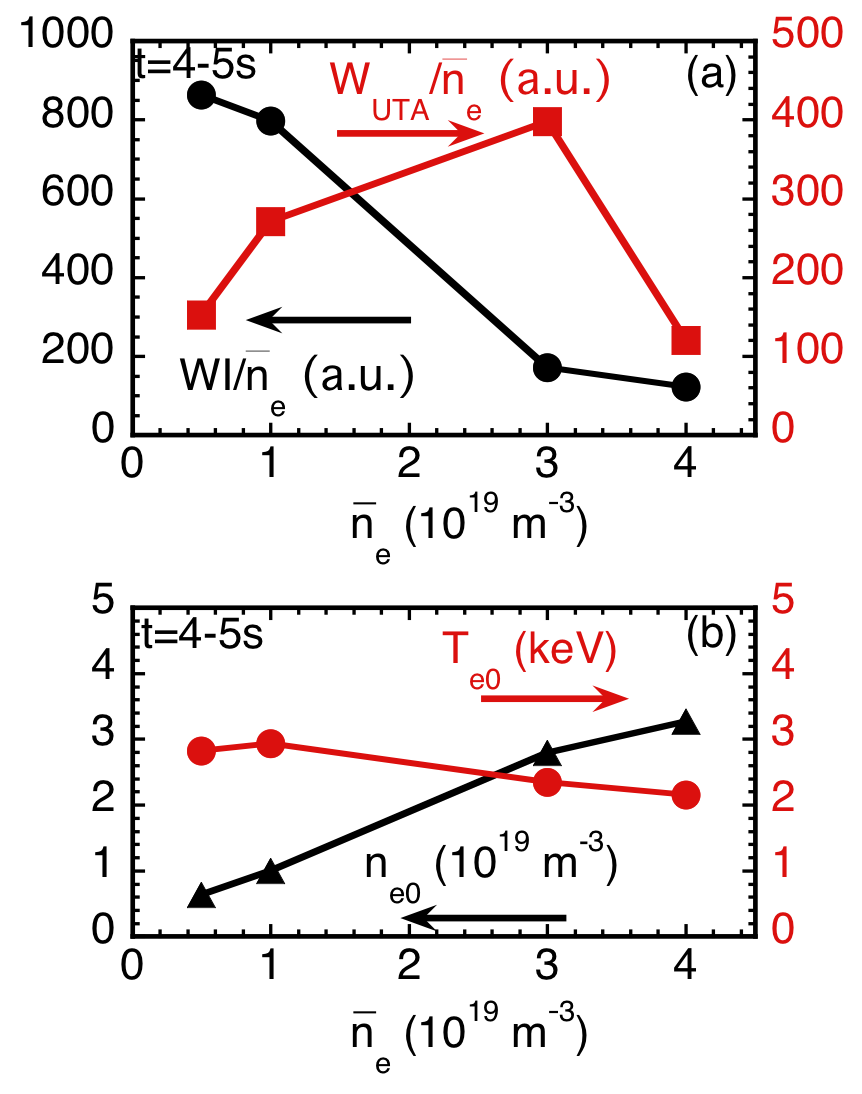 Figures 3(a)-(c) show depth profiles of W, Mo, and C on three positions on a divertor tile obtained by using a glow discharge optical emission spectroscopy (GD-OES). On the surface of the strike point only carbon is seen due to the erosion of coated-W (Fig. 3(a)). Near the strike point, W remains on the surface (Fig. 3(b)). However, the partial erosion of W is observed. On the other hand, in the area far from the strike point, W is not eroded and the carbon is deposited on the W-coated surface (Fig. 3(c)), indicating that the carbon presumably comes from other locations. Figure 4 shows the neutral W intensity as a function of nominal impact energy of carbon ions estimated from divertor probe. The sputtering yield of W from carbon impurity qualitatively coincides with the dependence of the intensity, indicating that carbon impurities can be a cause for the sputtering of W. If the full W-coated tiles are installed in future, the sputtering of W will be significantly reduced. These results demonstrate the plasma-wall interactions of W from low-Z impurities such as carbon and provide the important understanding of the W erosion and transport in the magnetic fusion devices. 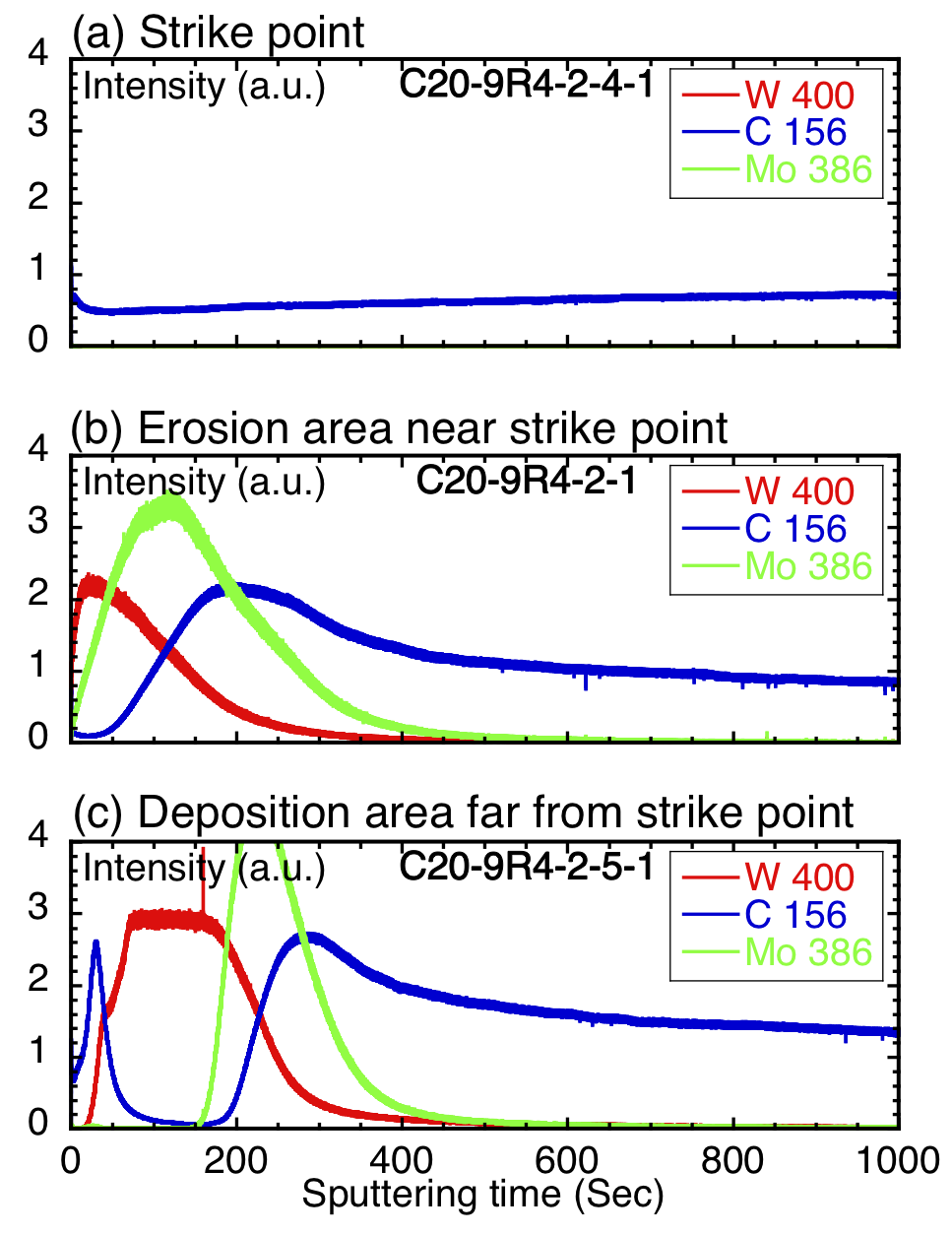 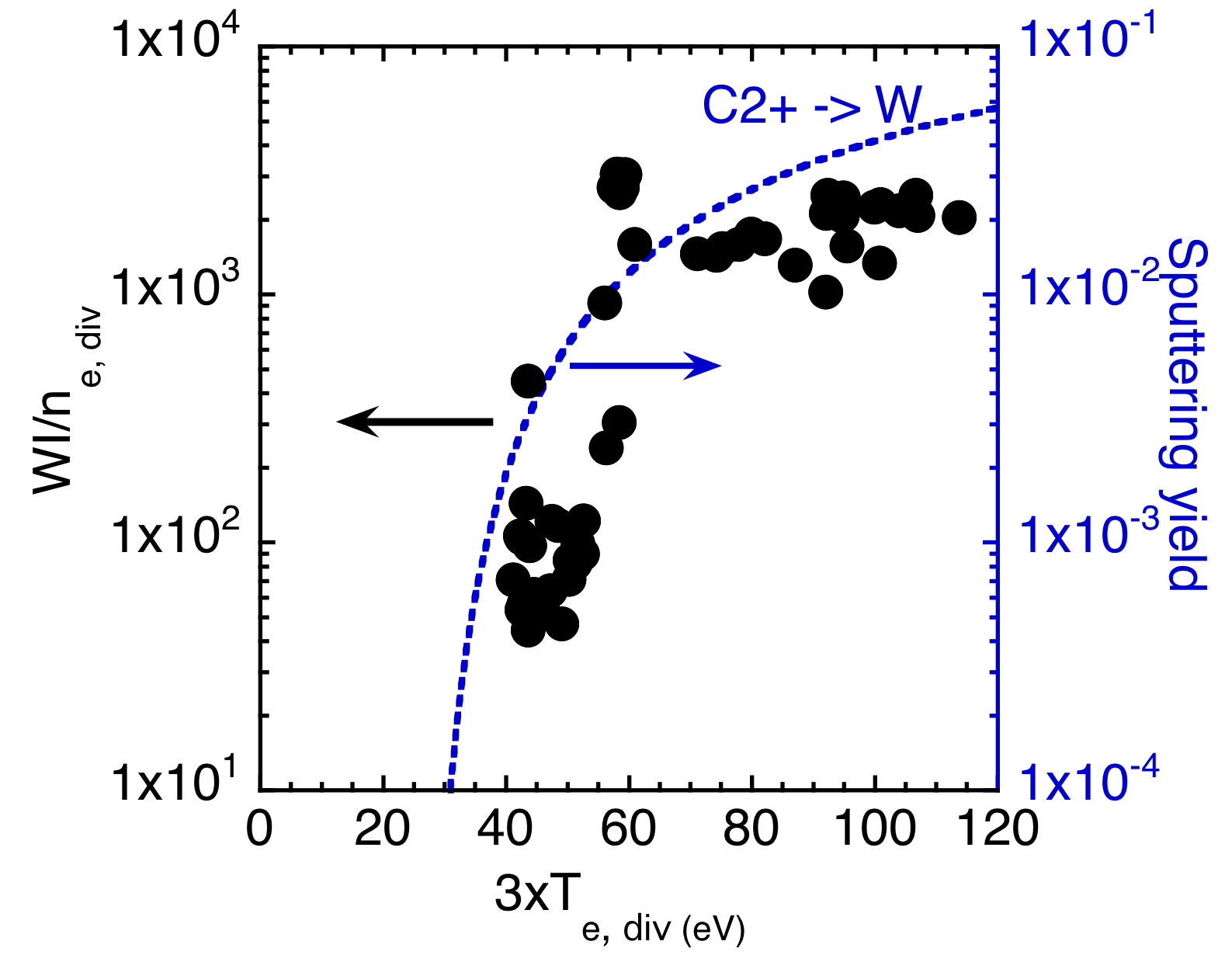