Strength of the internal transport barrier (ITB) is quantified in deuterium (D) and hydrogen (H) plasmas using a unique criterion based on the transport nonlinearity on the temperature. Two distinct isotope effects are found: (i) Stronger ITBs in D plasmas and (ii) edge confinement degradation accompanied by the ITB formation emerging in H plasmas. Principal component analysis reveals the important role of the density peaking for the strong ITB formation.
The isotope effect in magnetically confined plasma physics has been a long-standing mystery unsolved. In general, there are a number of experimental case studies on the isotope effect in tokamaks, but less in stellarators/heliotrons. The isotope effect is particularly prominent in transport barrier formation in tokamaks. For systematic understanding of the background physics, the isotope effect in the transport barrier property in stellarators/heliotrons need be assessed. Here, we report a recent progress on isotope effect studies for the ITB in Large Helical Device (LHD).
Unlike the case of tokamak plasmas, there is no generally accepted criterion for the ITB strength in stellarators/heliotrons. Here, a new criterion for the ITB strength is proposed by defining a unique scalar coefficient. The typical L-mode plasmas in LHD are characterized by the dome-shaped temperature profile with the diffusion coefficient being proportional to the temperature to the power of a factor $\alpha$, i.e., $\chi \propto T^\alpha$, where $\alpha=1$ is widely applicable. The reference L-mode profile $T_{\rm L}^{\rm ref}(r)$ is defined by extrapolating the edge temperature profile to the core according to the solution of the thermal diffusion equation with $\chi \propto T^\alpha$. By comparing $T_{\rm L}^{\rm ref}(r)$ with the entire temperature profile, the profile gain factor as the ITB strength is defined as $G_{1.0} = \int n (r) T (r) dV/\int n (r) T_{\rm L}^{\rm ref} (r) dV$, where the subscript 1.0 represents the $\alpha$ value used [A]. 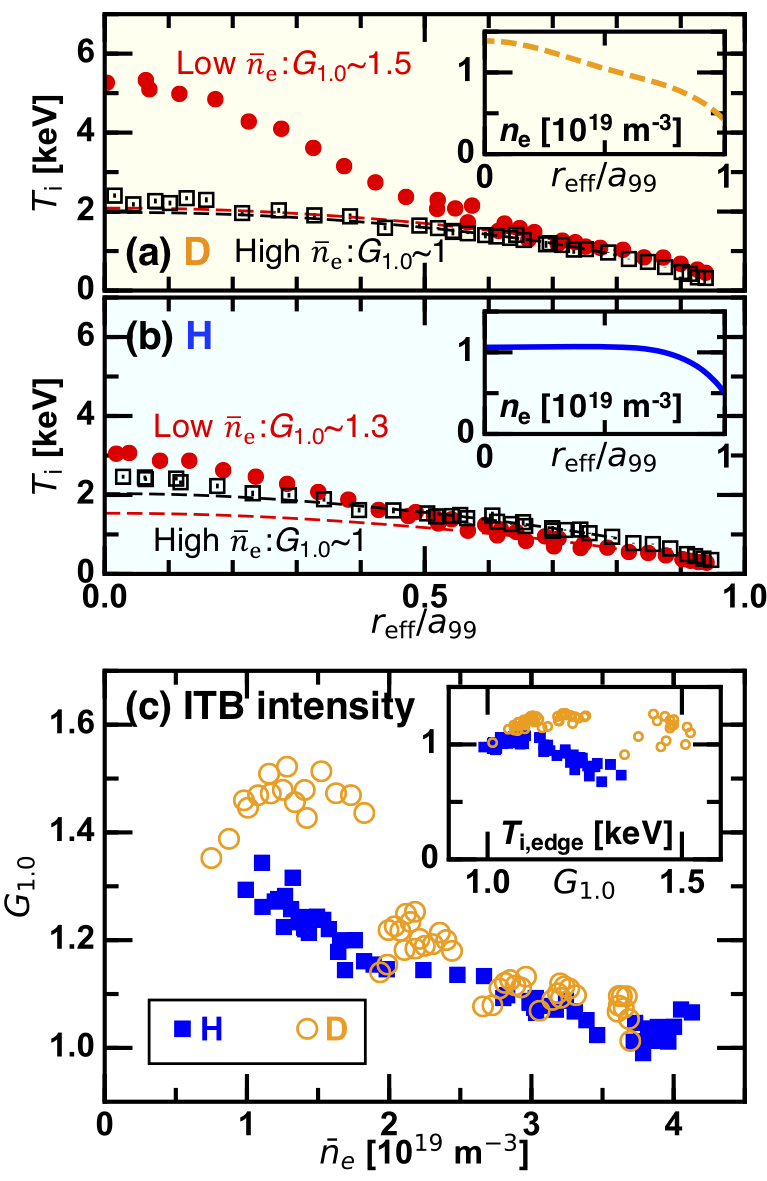