Over the past few years, the need to develop reliable external actuators to control Alfvén Eigenmodes (AEs) in burning plasmas has triggered a substantial amount of experimental activity in several tokamaks and stellarators [1]. This contribution summarizes the experiments related to the AEs control topic that have been carried out in the TJ-II stellarator, paying special attention to the latest experimental developments and the recent comparison with theoretical predictions. In this context, considerable effort has been devoted to investigate the impact of ECRH and EC driven current (ECCD) on NBI driven AEs observed in TJ-II plasmas [2, 3, 4]. Other actuators, as NBI injection energy, pellet injection, plasma density, magnetic configuration scans [5] or ohmic current induction have also been considered but the clearest impact on the shear Alfvén waves spectrum, while at the same time minimizing the induced changes on the main plasma parameters, has been obtained in ECCD experiments [6]. While moderate ECCD acts mainly on the rotational transform of the device barely changing the plasma parameters (ECRH power deposition profile for oblique injection is very similar to the perpendicular one), ECRH power itself strongly modifies the temperature and the density of the background plasma. Recent examples illustrating both situations are presented in figures 1 and 2.

In the first case, changes in activity are mainly related to changes in the spectrum of modes issued from the modified magnetic configuration. In the second case, the EC power induces density and temperature variations that have a direct impact on the energetic particles drive and the damping rates of the excited modes and, to a lesser extent, on the spectrum of modes. In Figure 1, we may observe the effect of a small amount of EC driven current when comparing the magnetic fluctuations spectrograms measured in two NBI+ECRH shots for which the ECRH power is being injected with and without associated ECCD. 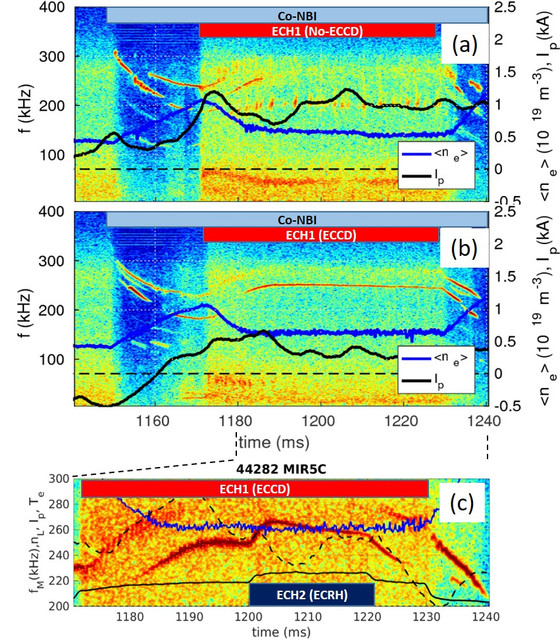 The changes in plasma current trigger the destabilization of a very clear frequency-locked mode (see figure 1(b)). Despite of the uncertainties related to the precise determination of the iota profile (that was estimated using theoretical calculations of the induced currents, i.e. NBCD, ECCD and bootstrap current contributions), the simulations using the FAR3D code predict the destabilization of several GAEs and HAEs whose frequencies match the ones observed experimentally [7].

The effect of ECRH power is better studied by adding extra power in AEs scenarios that have already been achieved using a combination of NBI and ECRH, thus avoiding the strong impact that ECRH power has when applied to a pure NBI heated plasma. For instance, adding further power in the ECCD scenario described above results in temperature variations that only produce an increase of the mode frequency without modifying its amplitude (see figure 1(c)). On the other hand, a similar experiment, but using a chirping mode scenario, demonstrated a clear mode amplitude mitigation, again accompanied by an increase of the mode frequency. This effect was previously documented in [2].

Figure 2 shows the result of scanning the ECRH power deposition location. Two ECRH beams at full power (keeping the first one on–axis while modifying the direction of the other one on a shot to shot basis) were used as target plasma for co-NBI heating. No pure NBI heated plasma is used here. In the NBI phase, the on-axis beam was shut-down, thus leaving the off-axis beam. Five different off-axis position were employed in the launching direction scan while keeping a more or less constant density during the NBI phase ($\overline{n}_e\approx 0.6\times10^{19}$ cm$^{-3}$) as the temperature decreased. The main mode shows a more or less pronounced chirping character whose behaviour could be tied to the modifications of the plasma profiles. However, slight changes in plasma current should also be considered to understand the changing mode pattern. In these experiments, provided no ECCD is being generated when moving the beams off-axis, only NBCD and bootstrap current, both of them affected by the changes in the temperature profiles,are at play. On the other hand, off axis heating modifies the fraction of ECRH power that goes to trapped or circulating electrons and this could have an influence on the mode pattern, particularly on the chirping mode structure since this later depends on the equilibrium between the impact of electron dynamical friction on beam ions and their diffusion in velocity space.

Independently of the more or less correct understanding of the theoretical reasons behind the observed behaviours, the experiments show that ECRH and, in particular ECCD, are efficient tools to modify AEs activity. Whether or not an effective control of AEs, which means developing capabilities enabling us to switch between stable and unstable mode conditions, can be achieved, is still under investigation.