Visible magnetic-dipole (M1) lines can serve as a novel diagnostic mean of tungsten in ITER and future DEMO reactors. Here we report that a local tungsten density in core plasmas of the Large Helical Device (LHD) is successfully assessed with the measurement of visible M1 lines emitted by W$^{26+}$ and W$^{27+}$. By such a measurement, (i) the radial profile of total tungsten density in the LHD core plasmas with a line-averaged electron density of $\sim$ 4 $\times$ 10$^{19}$ m$^{-3}$ and central electron temperature of $\sim$ 1 keV is found to be a hollow, and (ii) the total tungsten density is found to be decreased in the whole region with an increase in the electron temperature due to the onset of reheat mode. The scheme with visible M1 lines used in this work can be also applied for the tungsten density measurement at the ITER edge plasma.

Tungsten transport and its density control in plasmas are key issues in order to maintain high-performance plasmas in ITER with a tungsten divertor, because it is well known that a tungsten has a strong radiation cooling power. Electron temperature in ITER can range from 0.1 keV at the edge up to about 20 keV at the plasma center. In such a plasma, tungsten can be highly ionized ($q$ = 20 - 60), and can emit strong line emissions in extreme-ultraviolet (EUV) and soft X-ray regions. Until now, only a few direct measurements of tungsten ion density with spectroscopic diagnostics have been reported in the EUV range [A]. Recently, we observed visible lines emitted from highly charged tungsten ions due to magnetic-dipole (M1) transitions in the LHD core plasmas after a tungsten pellet injection [B]. Such visible M1 lines are useful particularly for fusion plasmas, because mirrors and optical fibers can be used for avoiding a direct neutron radiation on detectors. Currently, the W$^{26+}$ ion density can be also assessed by using the measurement of two M1 lines (335.7 nm and 333.7 nm), in addition to the W$^{27+}$ ion density assessed by the measurement of a M1 line (337.7 nm) [B], and then a total tungsten density in the LHD core plasmas can be assessed based on such ion densities.

Figure 1 shows time traces for the discharge of interest. In this discharge, a polyethylene tube containing a tungsten wire (0.6 mm long and 0.15 mm diameter, i.e., the number of tungsten particle is about 6.8 $\times$ 10$^{17}$ /pellet) is injected at the time of 4.03 s. After the tungsten injection, the central electron temperature is lowered down to 1 keV due to the strong radiation by the tungsten ions. Then, the central electron temperature remains at an almost constant value until $t$ = 5.4 s, while the line-averaged electron density gradually increases due to a hydrogen gas puff. About 0.1 s after the hydrogen gas puff is stopped at $t$ = 5.3 s, the electron temperature is increased, meanwhile the line-averaged electron density is decreased. Such changes in electron temperature and density can be considered due to the onset of a reheat mode.

Figure 2 (a) shows the radial profile of ion densities of W$^{26+}$ and W$^{27+}$ at $t$ = 5.0 s, which are obtained by dividing measured local emissivity of M1 lines by theoretical photon emission coefficients (PECs) of these M1 lines. Photons emitted along 44 line-of-sights (LOSs) on a horizontally elongated poloidal cross section of the LHD plasma are guided to a UV-Visible spectrometer by an optical fiber array. The local emissivity is inferred by an Abel inversion of vertical profiles of line-integrated intensities at the 44 LOSs. The PECs are calculated using a collisional-radiative (CR) model in which proton collision effects are also considered. Density dependence of the PECs is significant at high electron densities in the core, because collisional excitation and de-excitation among excited levels become important. Such density dependence, omitted in the corona model which is valid at low densities, can be correctly calculated with the CR model. The calculated PECs at $t$ = 5.0 s in Fig. 2 (d) are almost constant in the core due to a flat electron density profile. The ion abundance ratios of W$^{26+}$ and W$^{27+}$ (see Fig. 2 (b)) agree with theoretical values of the ionization equilibrium model where CR ionization and recombination rate coefficients are used. In the ionization equilibrium, fractional ion abundance is determined by rates of ionization and recombination of tungsten at the local temperature and density, regardless to transport. Thus, the agreement with the ionization equilibrium model indicates that tungsten transport time in the core is so long that the fractional ion abundance instantaneously equilibrate at local temperature and density via the fast ionization and recombination processes. 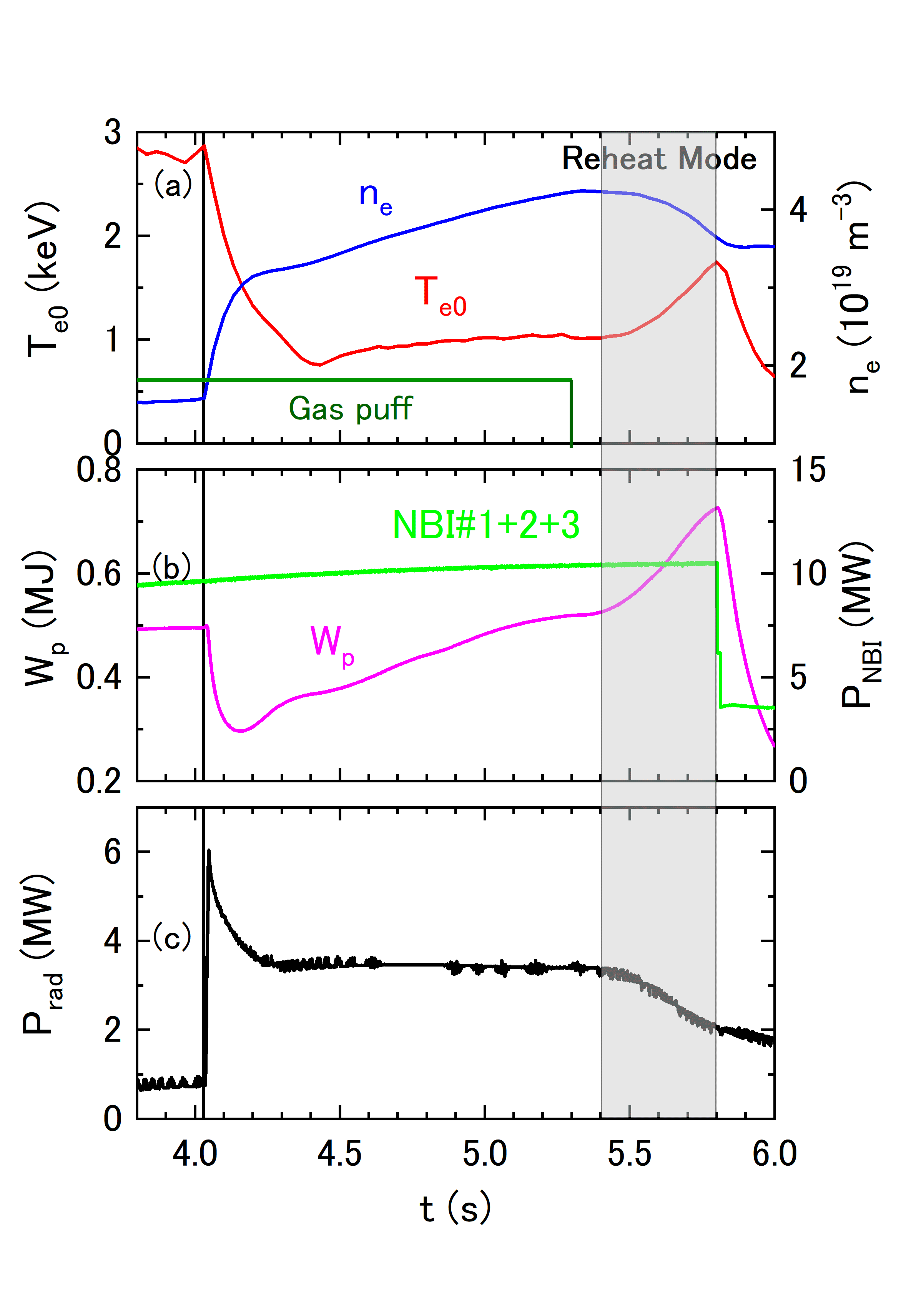 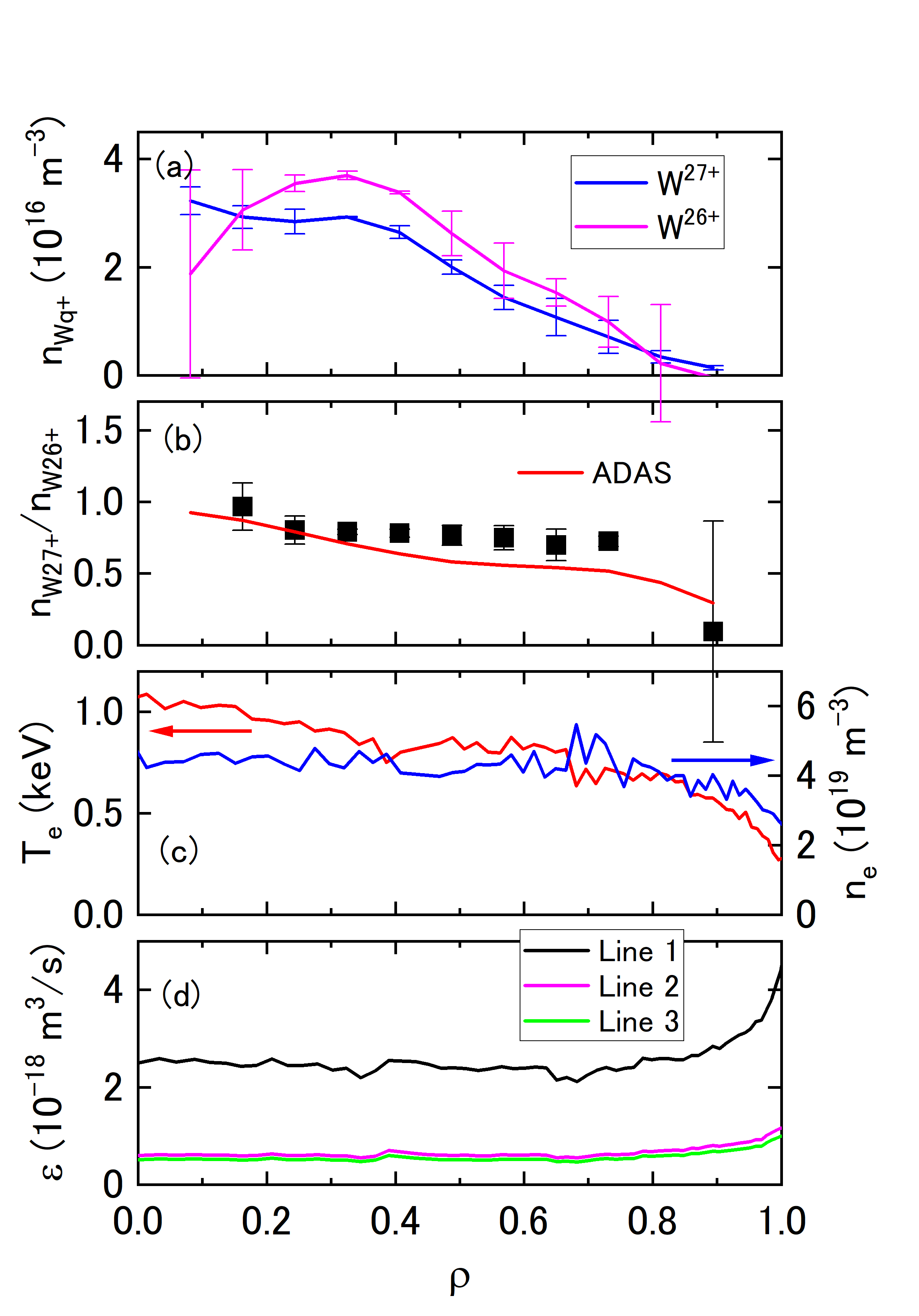 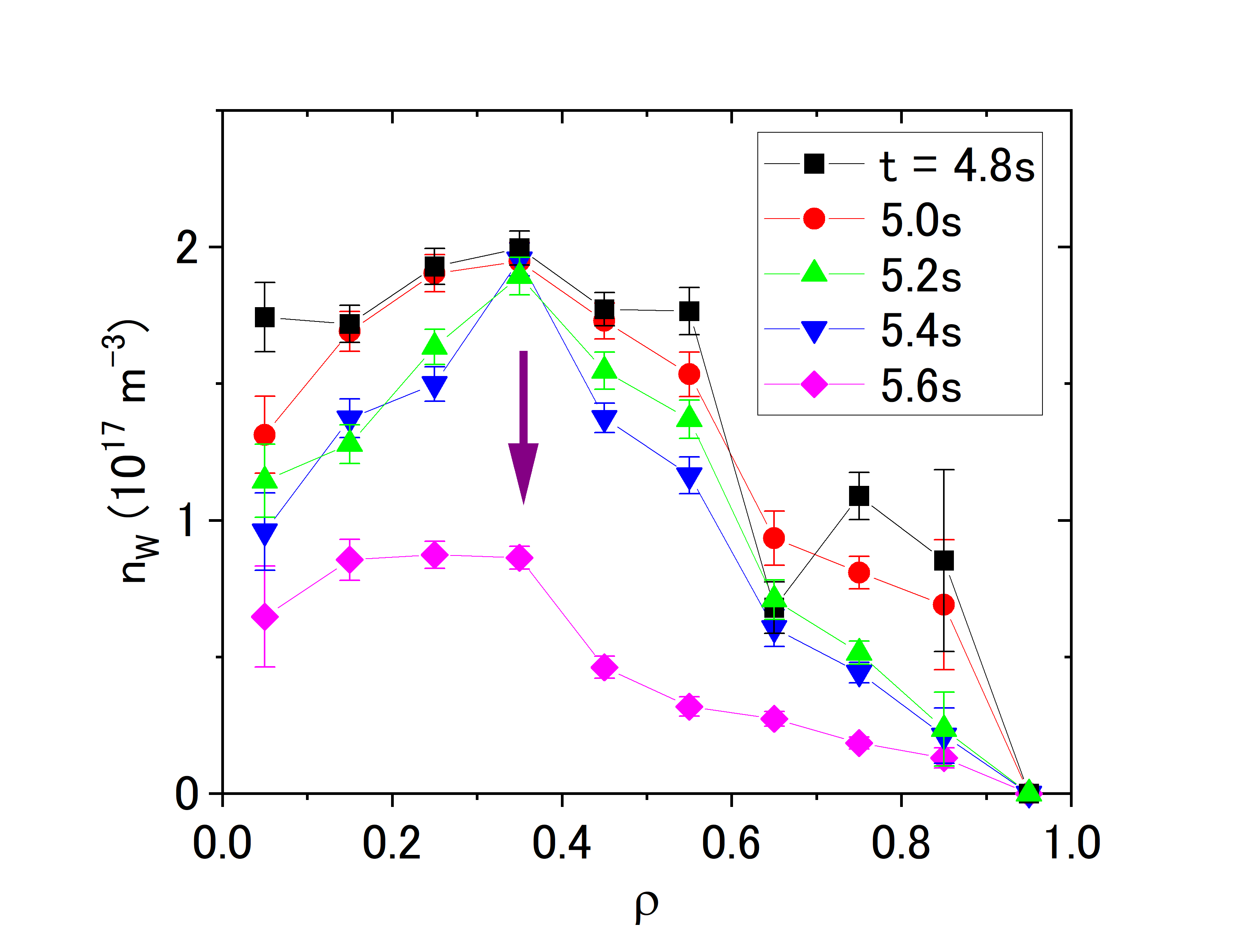