Energy confinement and energetic-particle (EP) driven MHD modes have been experimentally studied from the viewpoint of magnetic configuration effect in the Heliotron J helical device. Experiments scanning the bumpiness component in magnetic Fourier spectra show that (i) maximal kinetic energy in electrons is achieved when the medium bumpiness is chosen where the neoclassical (NC) diffusion is reduced, while it is degraded when the bumpiness component is too high or too low, and (ii) the excitation and damping of energetic-particle (EP) driven modes depend on the magnetic configuration, and they are mitigated with increasing on-axis ECH power at low bumpiness configuration. These results suggest that the magnetic configuration has an important role in global energy confinement and EP driven modes in helical plasmas.

It is an issue to optimize magnetic configuration for reduction of NC and turbulent transport, good energetic particle confinement and MHD stability in helical devices. The Heliotron J device has the advantage of flexible control of magnetic configuration by combination of a helical coil, toroidal coils and vertical coils. The bumpiness, which is the toroidal mirror ratio defined by εb = B04/B00, is a key component to control plasma performance in quasi-omnigeneous optimization. Here B04 and B00 are the toroidal mirror and uniform magnetic fields of the Fourier components in Boozer coordinates, respectively. The previous experiments showed a favourable energy confinement was obtained in a high εb configuration in NBI-only plasmas. A nonlinear gyrokinetic simulation qualitatively reproduces reduction in thermal transport coefficients with increasing the bumpiness, which is related to reduction in the ITG mode [A]. EP-driven MHD modes can also be controlled by magnetic field configuration such as rotational transform and its magnetic shear [B].

We have recently extended the experimental study on the dependence of energy confinement on the magnetic configuration in ECH-only plasmas where electron heating is dominant. Four configurations are chosen, the ultrahigh-, high-, medium-, and low-bumpiness configurations (εb = 0.22, 0.15, 0.06 and 0.01 at r/a = 2/3, respectively) with fixed toroidicity, helicity, rotational transform and plasma volume. Plasmas are produced and heated by 2nd X-mode 70-GHz ECH of about 0.25 MW and the ne and Te profiles are measured with a Nd:YAG laser Thomson scattering diagnostic. Figure 1 shows the electron kinetic energy as a function of electron density. The electron kinetic energy is maximal at high and medium e_b configurations, while it is low when the bumpiness is too high and too low, suggesting that optimization of NC transport is compatible with anomalous transport although anomalous transport plays a dominant role rather than NC transport. Figure 2 shows the ne and Te profiles in the three configurations. The central Te is almost the same, while the edge Te is low at the low εb configuration. The ne profile is hollow with the peak position more inside, and the edge ne is lower at the low εb configuration. This means that the plasma profile shape particularly at the edge region affects the global energy confinement. The difference in plasma profiles may be connected to the change in turbulent transport similarly as observed in the NBI plasmas. The bumpiness could affect the growth rate of TEM or ETG modes particularly at the edge region. 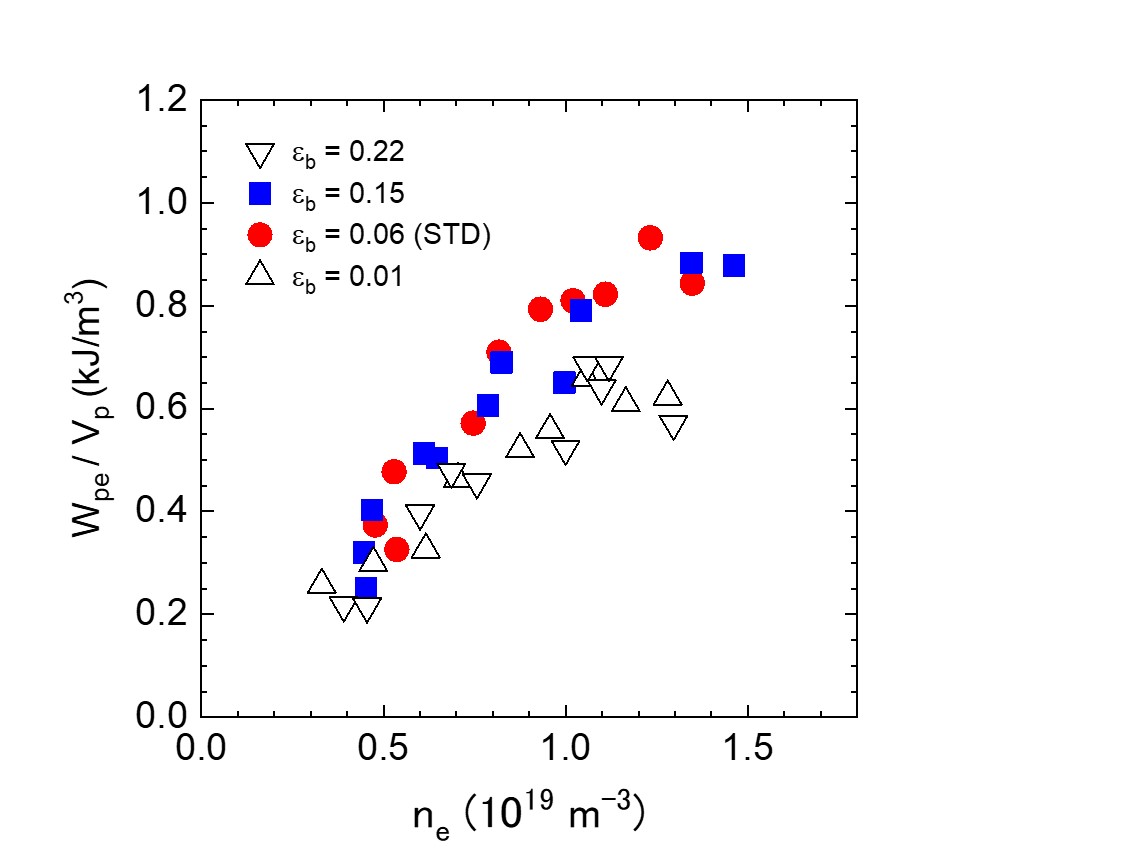 The magnetic configuration also affects EP-driven MHD modes such as global Alfvén eigenmodes (GAEs) and energetic particle modes (EPMs). Figure 3 shows the amplitudes of some observed modes for three configurations. The mode structure of GAEs in the medium εb configuration has been reproduced by a hybrid simulation code, MEGA. For the low εb configuration, the modes are mitigated with an increase in ECH power. On the other hand, in the high εb configuration, the GAE at 90 GHz is monotonically suppressed as the EC power increases, and the EPM at 100 kHz is destabilized. In the medium εb configuration, the GAE at 100 kHz is suppressed, and the EPM at 120 kHz is not a monotonic function. These results indicate the mode stabilization is related to the change in shear Alfvén spectra and population of trapped electrons which depend on the bumpiness. The non-monotonic behavior of the EPM may also be related to the balance between stabilization effect by continuum damping and destabilization effect by energetic particle pressure.