The perpendicular transport in the Scrape-Off Layer (SOL) of toroidal fusion devices is widely assumed to be dominated by turbulent transport. In tokamaks, a particularly important role in this regard is played by blob-filaments exhibiting coherent radial propagation. These filaments have been shown to significantly contribute to the perpendicular SOL transport and impact fundamental SOL properties such as the SOL width, plasma recycling at the first wall, and can furthermore cause high intermittent heat loads in plasma facing components [1,2]. In stellarators, the role of such turbulent filaments is less clear and is yet to be explored in the island divertor of the optimized stellarator Wendelstein 7-X. While turbulent transport is in general expected to be play an important role in the W7-X SOL due to the long connection lengths (several 100m), the particular characteristics are only beginning to be assessed. Both numerical simulations and experimental analysis are particularly challenging given the complex three-dimensional magnetic topology, non-uniform magnetic curvature, and three-dimensional plasma profiles and gradients.

Here, we employ reciprocating Langmuir probe arrays in conjunction with fluid model simulations to investigate the SOL turbulence in W7-X with a focus on turbulent filaments [3]. To avoid the additional complexity introduced by the magnetic islands, we first focus on experiments in the shadowed SOL region outside the islands, see Fig. 1a). The turbulent structures are in the experiment identified by conditional averaging of poloidally distributed electric probes measuring plasma density and potential fluctuations, yielding the well-known interchange mode picture of a dipolar potential distribution around a positive density perturbation which results in a radial ExB convection (Fig. 1 b/c). These structures are shown to be field aligned filaments due to their high parallel coherence along the magnetic field between reciprocating and target Langmuir probes. The delay between reciprocating and target probe in Fig. 1b) is consistent with the poloidal distance of the flux tubes (~cm) and poloidal propagation velocities (~km/s), while the parallel dynamics inside the filaments are very fast (on the electron thermal velocity time scale).

The experiments have been accompanied by drift plane simulations of seeded filaments, where the filament charge separation drive is due to the averaged magnetic curvature along the field lines at the measurement position of the reciprocating probe. Simulations and experiment agree remarkably, see Fig. 2. Compared to typical results in tokamaks, the radial velocitiy of filaments is about an order of magnitude smaller in W7-X. Larger filaments (20-30mm) show velocities as predicted by the fundamental sheath limited scaling [1,2] despite the long connection length, while smaller filaments are much slower than both sheath-limited and inertial scaling law. The modeling indicates that the slow radial velocity is due to the small curvature drive in W7-X which is a consequence of the large major radius and the particular magnetic geometry. 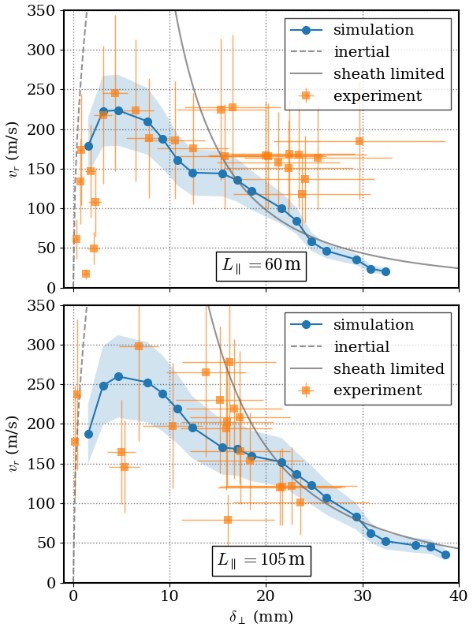 The slow radial velocity further implies that the turbulent filaments in W7-X do not travel significant radial distances within their life-time and therefore only cause local turbulent transport. In particular, a radial turbulence spreading as seen in tokamaks in not observed in W7-X, where the entire turbulence is local, i.e. the filaments are born and decay on the same flux surface. This conclusion that the turbulence observed in the W7-X SOL has a local character is further supported by the flat skewness and kurtosis profiles, i.e. by the absence of strongly peaked intermittent events.

These observations are an important first step to understand the complex SOL plasma parameter distribution in W7-X. A quantitative analysis of the experimentally determined turbulent transport is of course an obvious next step but requires additional modeling developments given that the measurements are 1-dimensional in a three-dimensional system. As a further next step, similar joint investigations of experiment and simplified simulations are being analyzed inside the magnetic islands, which adds further complexity to the analysis [4,5].