The stellarator W7-X has conducted, so far, experiments under both limiter and divertor conditions$^{1-2}$. While in the former case, smooth flux surfaces at the plasma edge, being free of low-order resonances, are cut by five local limiters, in the latter case, a lower-order island chain is intersected with ten sophisticated divertor units. Here, an interesting question emerges as how and to what extent the different plasma boundary conditions affect the impurity radiation and thereby the plasma performance, especially through radiation–driven thermal instability. They are the main topics addressed in this paper.

Figure 1(a) shows the data points collected from the quasi-stationary state of the limiter plasmas. They are all hydrogen plasmas generated with ECRH. Most of the stationary limiter plasmas have a radiation fraction $f_{rad}$ less than ~45%. At higher radiation fractions, the limiter plasmas are usually unstable and thermal instabilities develop$^{3}$. In this case, the stored plasma energy drops and the plasma shrinks, driven by an inwards movement of the radiation zone (see figure 2(c)). In contrast, most of the divertor plasmas can be stably operated at clearly higher radiation levels up to $f_{rad}$ ~ 0.9$^{4-6}$ without significant loss of the energy content. Examples ($P_{heat}$ ~3 MW) are shown in figure 1(right), gathered from both pre- and post-boronisation experiments.
In general, concerning impurity radiation, the island divertor has shown two beneficial effects in contrast with the limiter: 1) intensive radiation is located at the edge (r/a > 0.8) even at high radiation levels, and 2) the plasma remains stable up to a radiation fraction of ~90%.
Using two comparative examples, figure 2 shows the 2D radiation intensity distributions obtained by tomographic reconstructions based on the bolometer measurements. One is a limiter discharge (#20160309.7) and the other (#20171109.45) is a pre-boronisation divertor plasma to ensure that the comparison is made under similar wall-conditions. These reconstructions are performed by Gaussian Process Tomography method in the Minerva Bayesian modelling framework$^{7,8}$, which usually gives results similar to those of another algorithm, minimum Fisher information tomography$^{9,10}$. It clearly shows that a radiation zone, which peaks at r/a ~ 0.8 inside the LCFS (the red dashed line) of the limiter plasma, shifts outwards to the separatrix (see the magnetic islands with Poincare plot in black) in the diveror plasma. A common feature of all the discharges studied is that the radiated power loss fraction, defined as $f_{rad} =P_{rad}/P_{heat}$, increases with plasma density, while it decreases by increasing the heating power at a fixed plasma density.

Boronisation significantly reduces the carbon and oxygen yield in the machine$^{9}$. After wall-boronisation, the plasma densities required for accessing high-radiation regimes increase by a factor of ~3. The radiation distribution in the divertor plasma is less affected, and still localized at the plasma periphery. Poloidal asymmetry in radiation distribution is observed before and after boronisation. The radiation distribution becomes more up/down-asymmetric towards high-density, high-radiation, as shown in figure 2 (d). It is interesting to mention that this up/down asymmetry reverses under certain plasma conditions after boronization. The reason is unclear and needs to be investigated. It is often seen that a detachment transition is accompanied with an abrupt rise in radiation with respect to the density increment. At the same time, the radiated power from the SOL, $P_{rad,SOL}$, which can be estimated based on the line-integrals of bolometer channels purely viewing the SOL decreases. The portion inside the separatrix , i.e. $f_{rad,core} = 1- P_{rad,SOL}/P_{rad}$, jumps to a higher level, leading to a visible drop of the stored energy. An example is shown in figure 3, which shows to what extent this can happen. This sharp increment of the radiation level at a critical density was usually observed in limiter plasmas at detachment transition as well. However, after the transition, most of them are unstable and even collapse, accompanied with an inward movement of the radiation zone$^{3}$. By contrast, most of the divertor plasmas can withstand the abrupt transition, with the radiation layer stabilized around the separatrix.
As described, the island divertor concept on W7-X offers a large operating window up to high-density and high-radiation scenarios. Understanding the plasma radiation behavior and the impurity transport involved are essential for finding optimized operation windows of W7-X. This requires the knowledge of the background plasma parameters (of sufficient quality) and also a suitable tool, such as the EMC3-Eiren code$^{12,13}$, which is a 3D numerical tool capable of self-consistently treating the plasma, impurity and neutral transport in realistic 3D SOLs. Comparisons between the experimental results of bolometers with code simulations are ongoing. 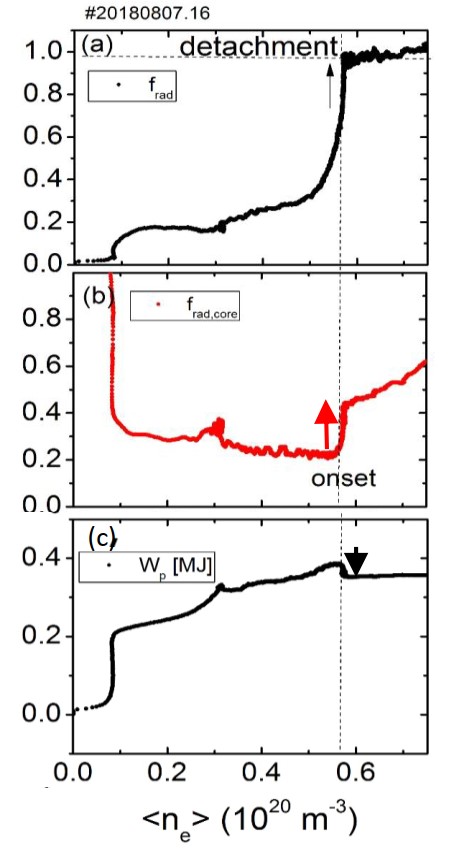