Injection of sub-millimeter-sized powder grains of boron composites is performed in the Large Helical Device (LHD) showing wall conditioning effects in real time during long plasma discharges. This alternative boronization technique has been recently employed in both tokamaks (1-4) and stellarators (5), showing beneficial effects on plasma performance both through the modification of the edge plasma and through first wall conditioning.
The superconducting magnets of LHD allow performance of long plasma discharges (up to one hour), offering the opportunity to test this technique in steady-state operation (SSO) conditions, contributing to the assessment of its viability in future fusion reactors. 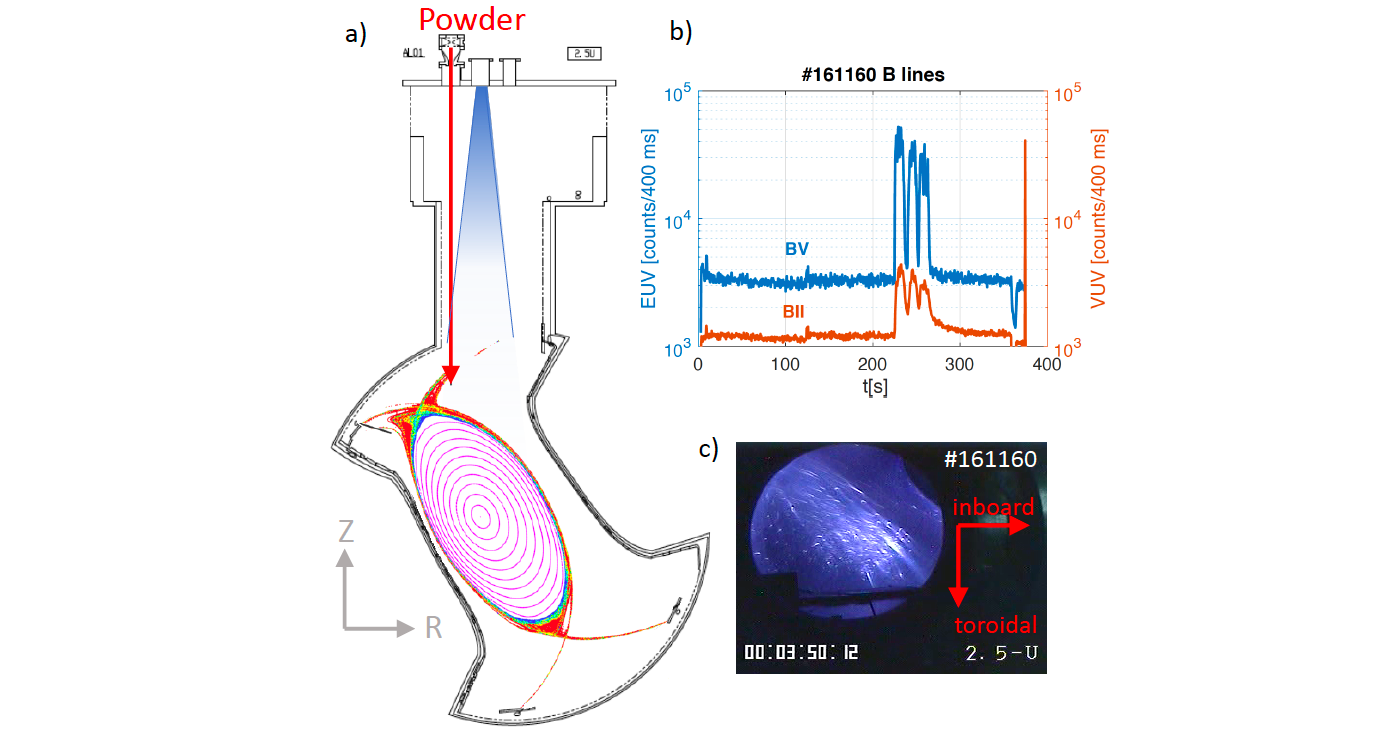 The Impurity Powder Dropper (IPD) (6), developed and built in PPPL, is mounted on the top of LHD. The selection of the upper port for the installation of the IPD was guided by predictive simulation of powder trajectories coupling the EMC3-EIRENE and DUSTT codes (7), evaluating the deflection of the injected powder grains by the plasma flow in the unique magnetic configuration of LHD. Here, a thick stochastic layer connects the helical confined region to four divertor legs, where the magnetic field is almost completely poloidal. The chosen position for powder injection relative to the LHD cross section in shown in Fig. [1]a.
First, dedicated short-pulse experiments are performed both before and after a standard glow discharge boronization using diborane gas (B$_2$H$_6$), with the aim of i) demonstrating effective impurity powder injection in the LHD geometry and ii) to characterize the response of the plasma to different injection rates in preparation of long pulse experiments. Controlled amounts of boron (B) and boron nitride (BN) powder were injected into hydrogen (H) plasmas, that were heated by 8MW NBI or $\leq3$ MW ECH, for up to 4 s.
Finally, a set of long pulse experiments was performed. Here, 10 s B powder bursts are injected into helium (He) and H plasmas with <800kW ECH heating of a duration between 37 s and 9 minutes.
Visible camera imaging (Fig. [1]c) and spectroscopy measurements of B lines (Fig. [1]b) confirm that the injected impurities effectively penetrate into the plasma, qualitatively confirming the predictive simulation results of Ref. (7). As a prompt effect of powder injection in short pulses, the density of the plasma is generally increased, together with the total radiated power and the stored energy. The electron temperature of the confined plasma is observed to increase for low density plasmas, while this effect is reversed for higher densities.

Control discharges featuring a density ramp-up with no powder injection were performed before and after the impurity powder injection experiments. An example of such discharges is shown in Fig. [2] (blue and orange). As an effect of cumulative B and BN injection, the oxygen and carbon level in LHD are shown to decrease by factors of 5 and 2 respectively. Consistently with a decrease of the impurity concentration, the total radiated power is also reduced after cumulative powder injection, indicating conditioning of the plasma facing components due to B injection. After the powder injection, the gas puff to obtain the same plasma density (up to intermediate densities) is increased, suggesting a decrease of recycling due to B wall conditioning. Similar results hold for the experiments performed at $R_{ax}=3.9$ m instead of the usual $R_{ax}=3.6$ m. For the experiments performed after a conventional boronization, no substantial reduction of the impurity level is observed when comparing control discharges (black and yellow in Fig. [2]), since the impurity level was already minimized by the previous B$_2$H$_6$ boronization. Still, an identical gas puff feeding results in, after cumulative B and BN injection, 18% lower plasma density, suggesting reduction of recycling at the strike points.

Leveraging the results of short pulse experiments, it was demonstrated how the IPD can be used in long discharges for both real time wall conditioning and plasma density control. In the top panel of Fig. [3] we consider a 40 s He discharge with constant gas fueling after t = 20 s, featuring a 10 s B powder injection (green shade). A few seconds after the usual increase in plasma density due to B injection (as observed in 4 s - short pulse experiments) the plasma density starts to decrease with respect to an identical discharge without powder injection (dashed lines), and correspondingly the plasma temperature is increased (since the input power is unvaried). This can be considered evidence of reduced recycling after powder injection. The variation of plasma density and temperature can be minimized when an active feedback control is used on the gas fueling (bottom panel of Fig. [3]). The decrease of recycling can still be observed from the increase of gas puff after powder injection with respect to the reference case, and on a shot-to-shot basis from the comparison of repeated control discharges with no powder injection alternating the ones whit B injection. Results from interpretative EMC3-EIRENE simulations of the LHD edge plasma will be presented.