Many tokamak experiments have demonstrated improved core confinement with high toroidal rotation shear. It is widely recognized that turbulence-driven zonal flow has a strong impact on confinement. It has been pointed out that zonal flow can be driven by the parallel compression$^{1,2}$, which is expected to be enhanced with equilibrium parallel rotation shear. Particularly, a gyrokinetic simulation study manifests an essential role of the parallel compression in the zonal flow generation and turbulence regulation in a realistic tokamak geometry$^3$. In this work, we report a gyrokinetic simulation study demonstrating zonal flow amplification in nonlinear saturation stage of rotating plasmas. The energy ratio of the zonal flow to the turbulence is found to increase with the parallel rotation shear.

Figure1 shows the time histories of the field energy of the zonal and the fluctuation components with (a), and without (b), equilibrium parallel rotation shear $U_{||0}'$ for a fixed value of $R_0/L_{T0}=5.21$. The energy ratio of the zonal to the fluctuation components (the red curves) increases in the presence of $U_{||0}'$. We note that the linear growth rate of the case with $U_{||0}'$ is larger than that of the no rotation case, as shown by the earlier nonlinear saturation. In spite of the larger linear growth rate, turbulence is saturated at a lower level with the rotation shear due to the increased zonal flow. 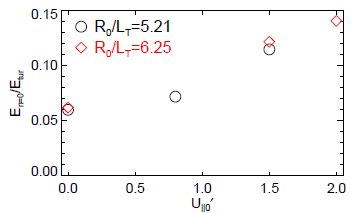 The energy partition between the zonal flow and the turbulence for various values of $U_{||0}'$ and $R_0/L_{T0}$ is shown in Fig.2. The presented energy ratios are obtained by averaging over a time period during nonlinear saturation phase, which is denoted by the red broken lines in Fig.2, for example. The zonal energy portion increases with $U_{||0}'$ for the different $R_0/L_{T0}$ values. These results demonstrate zonal flow amplification by the mean rotation shear, being consistent with confinement improvement with high toroidal rotation shear in tokamak experiments.

In our previous work$^3$, we explained the generation of zonal flow as a consequence of the potential vorticity (PV) flux. And we evaluated contributions from the parallel compression and the perpendicular drift motions in the gyro-center density evolution, to the PV flux. According our findings, the two dominant contributions from the parallel compression and the grad-$B$ drift largely cancel out in the no rotational plasmas. This balance, but not exact, limits the PV flux and the zonal flow. On the other hand, with mean finite parallel rotation shear, the parallel compression-driven PV flux becomes dominant over the grad-$B$ drift-driven one. The asymmetry between the dominant contributions can produce larger PV flux, leading to the amplification of zonal flow. In the previous work, however, the physics of the zonal flow amplification and the turbulence saturation have not been fully elucidated. We will uncover these underlying mechanisms in detail in the future presentation.