Data assimilation techniques are applied to the integrated transport simulation (TASK3D[A]) in Large Helical Device (LHD). We use the ensemble Kalman filter (EnKF) and the ensemble Kalman smoother (EnKS) as data assimilation methods for the estimation of state variables. The time series data of experimentally measured temperature and density profiles are assimilated into TASK3D[B]. The obtained electron and ion temperature profiles and temporal variations agree well with measured ones owing to the optimization of the employed turbulent transport model and the heat deposition. These results indicate the effectiveness and validity of the data assimilation approach for accurate prediction of the behavior of fusion plasmas and the possibility of advanced turbulence modeling.

Integrated simulations for fusion plasmas have various uncertainties in each of the employed simulation models, specifically turbulent transport models. Because of these model uncertainties, the simulation results are not totally confident to predict the behavior of fusion plasma. To solve this problem and to predict the behavior of fusion plasmas with high accuracy in real-time, data assimilation techniques are applied to the integrated transport simulation by TASK3D for a plasma in LHD. As data assimilation methods, we use the EnKF for the prediction and the EnKS for the estimation of the models which can reproduce experimental data. The EnKS optimizes the state variables using both past and future data, while the EnKF using only past data.

For the LHD plasma, the gyro-Bohm model for electron turbulent transport coefficient, $\chi_{\rm e}^{\rm TB}$ and the gyro-Bohm gradT model for ion one, $\chi_{\rm i}^{\rm TB}$ are employed based on previous TASK3D simulations:
electron : $\chi^{\rm TB}_{\rm e}=C_{\rm e}\left(\frac{\rho_i}{a}\right)\left(\frac{T_{\rm e}}{eB}\right)$, ion : $\chi_{\rm i}^{\rm TB}=C_{\rm i}\left(\frac{\rho_i}{a}\right)\left(\frac{T_{\rm i}}{eB}\right)\left(\frac{T_{\rm i}'}{T}_{\rm i}a\right)$,
where $B$ is the magnetic field strength, $\rho_i$ is the ion Larmor radius, $a$ is the minor radius, and $C_{\rm e}$, $C_{\rm i}$ were constant factors. The state vector is composed of the electron and ion temperature ($T$), density ($n$), numerical coefficients of turbulent transport models ($C$), and heat deposition ($P$). The conventional calculation of the NBI heat deposition by the GNET-TD takes several hours for a simulation run of two seconds in actual plasma. The EnKF can accelerate the simulation by using the reduced simulation model for NBI while ensuring the prediction accuracy. The time series data of experimentally measured temperature and density profiles are assimilated into TASK3D.

Figure 1 shows the simulation results of $T_{\rm e}$ and $T_{\rm i}$ by EnKF, that have been performed for the cycle of assimilation, $\tau_{\rm DA}=80$ msec. The obtained $T_{\rm e}$ and $T_{\rm i}$ profiles and temporal variations by the data assimilation system have agreed well with measured ones. Figure 2 (a) shows the filtered estimate of $C_{\rm e}$. The radial profile has been optimized to reproduce the experimental temperature data, but this estimate is based on only the past data. The EnKS corrects the filtered estimate using future data. The smoothed estimate of $C_{\rm e}$ by the EnKS is shown in Fig. 2 (b). Because the future observations are reflected in the filtered estimates, the position of peak moves in the direction of the time axis (form 1.2 sec to 1.0 sec). We have confirmed that the TASK3D simulation (without the EnKF) using the smoothed estimates of $C_{\rm e}$, $C_{\rm i}$, $P_{\rm e}$ and $P_{\rm i}$ can reproduce the experimental temperature data with the high accuracy by Fig. 3.

If the estimates of $C$ for various plasmas can be reproduced by a parametric or nonparametric model, a more appropriate turbulent transport model for the prediction can be obtained with relevant physical interpretation. The data assimilation system based on an integrated simulation code is expected to be a powerful tool to analyze, predict and control the behavior of fusion plasmas in high accuracy. 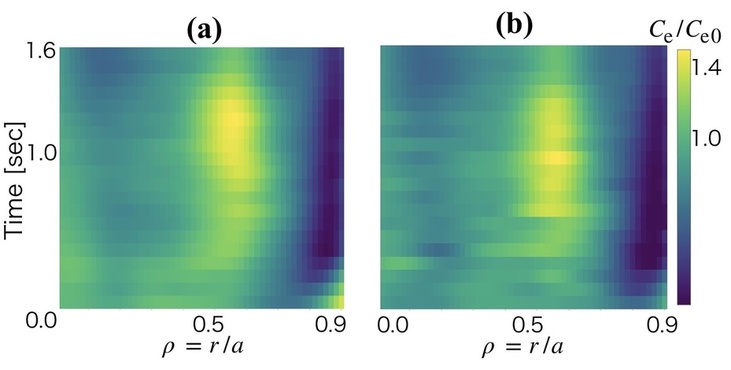 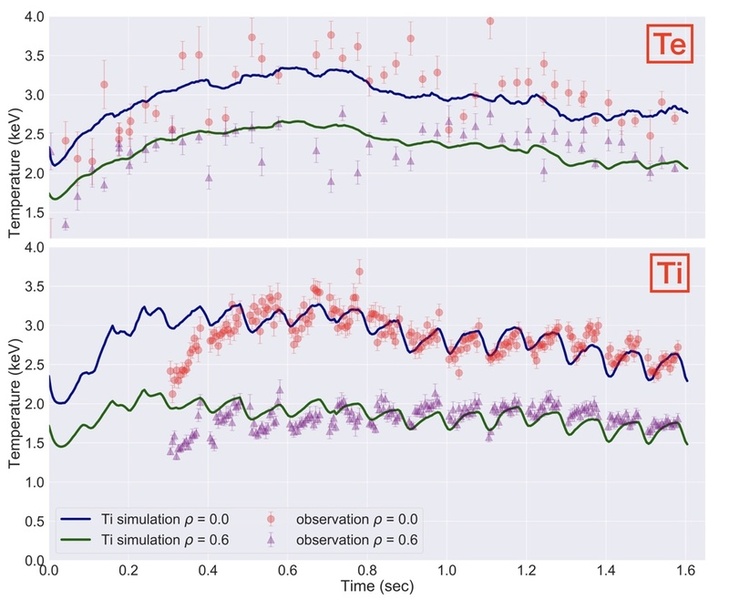