We carried out global calculations of neoclassical (NC) impurity transport in helical plasmas including the effect of variation of electrostatic potential on the flux surface, $\Phi_1$, for the first time. An impurity hole plasma found in LHD experiment is analysed by the global simulation. Contrary to the conventional local approximation models, which indicate negative ambipolar radial electric field ($E_r$) for the ambipolar condition, the global NC simulation predicts positive ambipolar-$E_r$ and impurity particle flux is driven outwardly, which is even enhanced by $\Phi_1$. If $E_r$ is negative in the global simulation, on the other hand, $\Phi_1$ enhances the inward impurity flux. Our result indicates that the global effect is the key to correctly predict the $E_r$ profile and impurity transport in impurity hole plasmas.

In LHD, the formation of extremely hollow density profiles of impurity ions, such as carbon C$^{6+}$, in the core region of high $T_i$ plasmas has been observed. This phenomenon is called ``impurity hole''. Local NC simulations, which neglect radial drift in the guiding-centre equations of motion, find ion-roots (negative $E_r$) as the ambipolar conditions for such plasmas. These results indicate that highly charged impurities are expected to be driven inwardly, which are contradicting to the observation. Gyrokinetic simulation$^1$ also predicts that the impurity particle flux is inwardly directed in the impurity hole plasma. In recent studies, it has been shown that the $\Phi_1$ potential, which had commonly been neglected, has significant impact on NC impurity transport$^{2-4}$. Yet, all of those calculations have been performed with local simulation codes, and the necessity of global calculation has been suggested$^{3,5}$. We thus have extended a global NC code FORTEC-3D to include $\Phi_1$.

Besides the studies of the $\Phi_1$-effect, we find an electron-root of the ambipolar condition for the impurity hole plasma by the global simulation. In the high-$T_i$ and low-collisionality regions in which impurity hole is usually found, $E_r$ is relatively weak and the radially local approximation tends to be invalidated by the global effects. Thus, we have investigated the structure of $\Phi_1$ and its impact on particle transport for two different cases, one with an ion-root (local solution) and the other with an electron-root (global solution) $E_r$, respectively (see Figure 1). 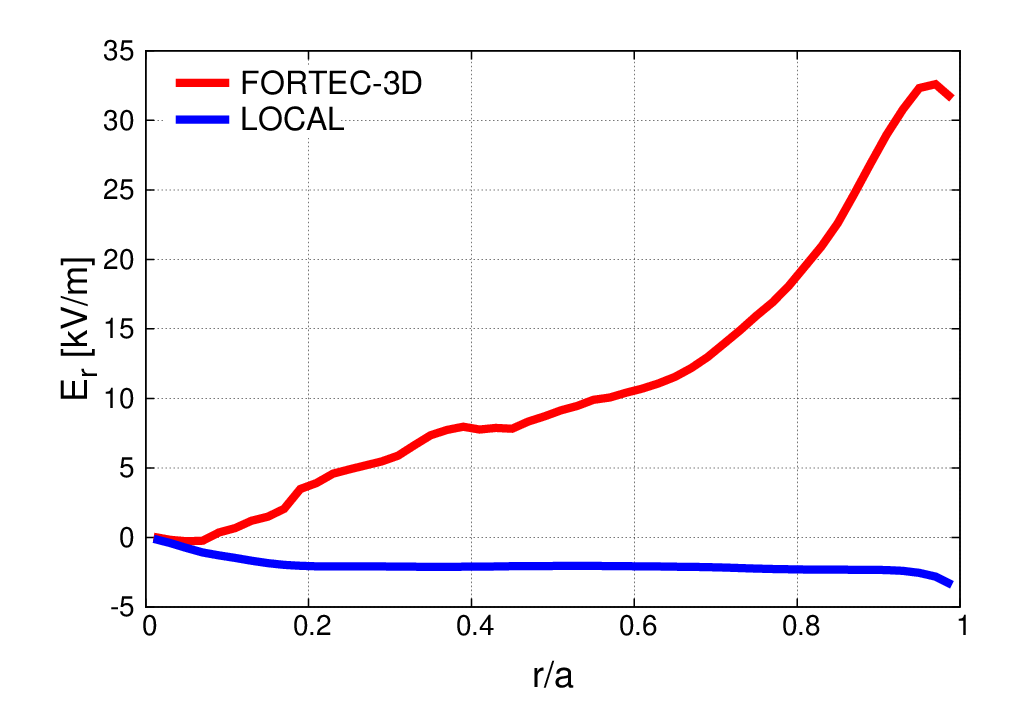 In Figure 2, the radial carbon particle fluxes for the cases with and without $\Phi_1$ are compared. For the ion-root case, the C$^{6+}$ flux is driven further inwardly by $\Phi_1$. This result is analogous to the local results$^{3,4}$. In contrast, the radial flux is outwardly enhanced by $\Phi_1$ for the electron-root case. The reason behind the contrast between those cases can be found in the phase structure of carbon density variation. In Figure 3, the phase structure of $\Phi_1$ and the density variation of carbon, $n_{C1}$, on the flux surface at $r/a=0.5$ are shown, where $r$ is the radial coordinate and $a$ is the minor radius of the plasma. Comparing $\Phi_1$ and $n_{C1}$ between positive and negative $E_r$ cases, respectively, it can be seen that the phase structures of $\Phi_1 $ are not largely different but the structures of $n_{C1}$ are inverted in $\theta$-direction between the two cases. The sign of the radial particle flux driven by $\Phi_1 $ is determined by the product of the Fourier spectra of $n_{C1}$ and the radial $E\times B$-drift generated by $\Phi_1$. The phase inversion of $n_{C1} $ in $\theta$-direction reflects the sign inversion of the leading modes in the $n_{C1}$ spectrum. Thus, in order to avoid the negative enhancement of the flux by $\Phi_1$ for the ion-root case, either the phase structure of $\Phi_1$ or $n_{C1}$ has to be strongly modified, but our analysis implies that such radial modifications are unlikely to occur unless strong particle or torque source exists. Thus, our conclusion is that it is difficult for $\Phi_1$ to mitigate the inward C$^{6+}$ flux in ion-root plasmas.

Although impurity hole has been observed in several different shots, a measurement on the core $E_r$ profile has been reported only for a single case$^6$. Plasma profiles used in our study are close to but not the same as those in the measured case. The experimental study shows that while the sign of $E_r$ is indeed negative near the magnetic axis, $E_r$ transits to positive at some outer radius $r/a \sim 0.5$. Our code can be applied to such a case in which $E_r$ changes its sign, which is another advantage over the local codes. The sign of $E_r$, which is the key to predict the impurity flux, can change in the conditions which are not included in the present simulations. The result of this study suggests the necessity of extension of our code for self-consistent calculation of multi-ion-species transport and the ambipolar condition including $\Phi_1$.